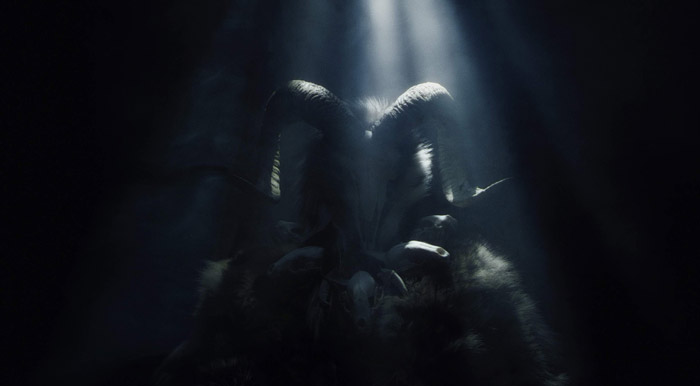 Review: 'Sator' Will Reveal Itself When It's Ready

A lodge surrounded by a bitter forest with no connection to the outside world is both a tempting and frightening place to find oneself. Left alone with racing thoughts and a mission unchecked by grounded notions of others can make for an unforgiving atmosphere. This is where Sator lives.

Adam (Gabriel Nicholson) has relegated himself to a cabin in the woods. Each day, he reviews footage of the empty woods from the night before, while listening to tapes of his grandmother as she recounts her relationship with an entity called Sator. Interspliced with Adam’s work are home movies and flashbacks of his family, most of his grandmother, Nani (June Peterson). Nani recounts how Sator arrived in her life and what he makes her do. She implies it was connected to the death of her husband but describes it as her guardian. Beneath her chronicle is shots of her “automatic writing;” pages of scribbled words she says she transcribes while Sator feeds them to her. She hears it and it’s never clear what she sees. As Adam gets closer to the entity, the story gets farther away. He begins to hear from Sator and continues to search for it while his siblings express concern as to just what or how powerful Sator is.

Jordan Graham’s feature is somewhat of a one-man show. Though never stepping in front of the camera, he wrote, directed, shot, edited, scored, and (co-)produced the film. Such autonomy might leave creators unchecked, stuffing too much of themselves into the meat-grinder. Yet Graham’s clear vision is the sausage that came out the other side.

His story is a personal one, as three generations of Graham’s family have been hospitalized for hearing voices. Graham’s real-life grandmother experienced these voices and named one of them ‘Sator.’ Now, she plays Nani. Her real-life journals are shown on screen, and Graham adapted his story around her as she spoke unexpected things into the camera. Sator ends up being a living art project as Graham reconciles the story of his family drenching it in a horror movie aesthetic.

“Style over substance,” can sometimes feel like a dismissive critique but that’s not the case here. The very strength of this film is its style, setting it apart from its obvious cohorts. It’s tempting to compare Sator to films like Relic or Hereditary but that’s more in theme and tone than the overall method of storytelling, which is the meat of this film, for better or for worse.

Graham is in no rush to share his story with you, his movie oozing like molasses. It’s a “slow burn” as it were, guiding the viewer through confused ramblings laid atop startling and contextless scenes. It does the viewer no favors to attempt to decipher the narrative or mystery as it plays like an art piece that will reveal itself to you when it’s ready. Through shots of burning candles, empty woods, and old home videos, Graham slowly feeds the audience a tale of the dreadful human mind, never feeling compelled to spell out the metaphors contained within.

Yet for all its style and for all of Graham’s success in controlling the work, something is lost when a piece feels more made for the creator than the audience. Adam’s narrative is fractured. The story plays out of order, filling in the blanks and slowly explaining where Adam is and why. For every commendation lobbed at its gall in telling the story this way, there’s condemnation for it being an unsuccessful use of the techniques. Sure, the breadcrumbs left minute by minute mirror the mind of its lead, sucking the viewer into the distressed perspective, but that’s what renders it too “arty,” putting up too many walls between itself and the viewer.

Graham chose to show the monster rather than relegating him to existing only by word of mouth. The monster design is nothing new or unique, but that’s what works. Its appearance grounds the unfamiliar storytelling with familiar Satanist film appeal.

The performances are weird, and that’s said as the highest praise. Specifically, Peterson delivers her lines like she’s the kooky mother in a true-crime documentary. There’s no sense of movie glamor which contributes to the spooky and messy vibe that the feature lives on. Peterson is Graham’s real-life grandmother, an interesting choice that explains her authentic line delivery and how Graham was able to splice in what appears to be real footage of a younger Nani. Gabriel Nicholson’s quiet performance and bulky appearance brings stature to the character in a way that lets him be both sympathetic and menacing. The supporting cast slips well into the gritty style. Each actor is clearly on the same page about what kind of movie they’re making.

Ultimately, Sator is a frustrating haunt that only gives relief to an inquisitive viewer one bite at a time. In doing so, it mirrors not only the haunted minds it is attempting to portray but also the experience of understanding a family member with such a haunted mind. Graham’s story is somewhat inaccessible, but for those willing to listen, Sator has a lot to say.

← The Secret Villain of 'The Lady and the Dale' Is Tucker Carlson's Dad | HBO Max's 'The Head' Review: Just Set Me Adrift on an Ice Floe →