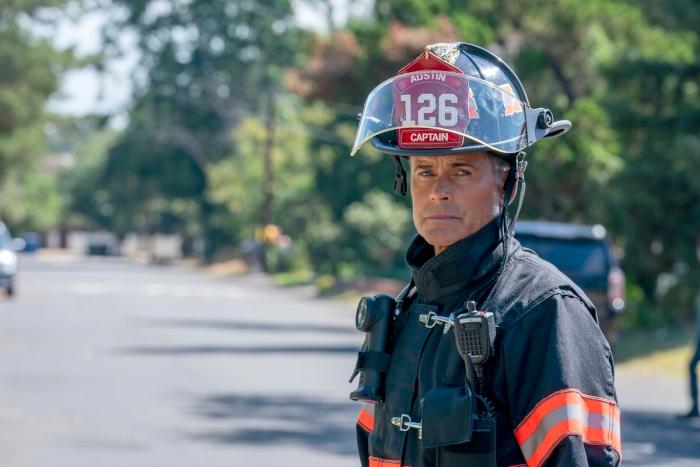 Forget every mean thing I’ve said about 9-1-1 this season — every complaint I’ve lobbed about its pacing or lack of stakes. I was wrong. Do you hear me, Tim Minear? I’m sorry. I’m so sorry. You and your staff were doing a bang-up job, and you’ve proven your point. After sitting through the two-night premiere event for 9-1-1: Lone Star, I have realized the error of my ways. I didn’t know how good I had it, with the rebar-skulls and the tsunamis and the whole “Bobby killed an apartment building full of people including his own family” of it all. Whatever mad alchemy made all of that nonsense not only palatable but desirable in the original is completely missing from the southern-fried spinoff, and all that’s left is a pile good intentions, a cast of nameless characters, and some sad jokes about Rob Lowe’s grooming regimen. I mean, this is a 9-1-1 show set in Texas, and not a single person got gored by a bull or drowned in crude oil in the first two hours? WHAT THE ACTUAL F*CK?

To understand why Lone Star is such a disappointment, I suppose I need to explain the premise, which — on paper — sounds like it should be the perfect amount of Too Much for a show of this caliber to carry. The firefighters from Station 126 in Austin, TX, respond to a fire only to get blown the hell up by an unexpected manure explosion (this is likely inspired by a real-life fertilizer plant explosion in West, TX, in 2013). The lone star survivor of the tragedy is a firefighter named Judd Ryder, a.k.a. Hoyt from True Blood (Jim Parrack). He’s left with a serious case of PTSD and survivor’s guilt. Meanwhile, Rob Lowe stars as Captain Owen Strand, a veteran member of the New York Fire Department who also happened to be a first responder at Ground Zero on September 11th. When Austin starts looking for a replacement captain to rebuild Station 126, they come to Strand first because he has experience rebuilding teams (after, you know, 9/11), and he also has experience creating “diverse” teams because he is, after all, a white man. Oh! Speaking of 9/11, Strand has lung cancer because he was at Ground Zero. That is a very serious, real issue, which the show treats mostly as a vehicle to joke about Rob Lowe’s hair. Moving on.

Strand loves his city and he loves his job, which he works with his son, TK (the template for this spinoff is clearly “Bobby and Buck, but make the father/son dynamic literal”). So it makes sense that he turns the Austin gig down at first. Not even his sudden cancer diagnosis makes him reconsider. No, what finally sets him on the path to Texas is his son’s overdose. TK (Ronen Rubinstein) proposes to his boyfriend, only to find out his boyfriend has been cheating on him with a Spin instructor. Apparently, in the past, TK had addiction issues, and with his heart freshly broken he turns to oxycodone once again. Owen finds his son on the floor of his apartment and saves his life, then decides the best thing for both of them might be a change of scenery.

That’s right: Owen thinks the best way for his homosexual, suicidal, drug-addicted son to recover is to move him out of NYC and down… TO TEXAS. Let that logic sink in.

Anyway, once they arrive in their new home, Owen spends Austin’s apparently bottomless budget on redesigning the station house to look like a second-rate Silicon Valley start-up office (complete with nap pods!) and wooing fresh, diverse talent to fill its ranks, per the city’s request. TK is the first member of his new team, followed by a local named Mateo (Julian Works) who has repeatedly been passed over by the fire department because he keeps failing the written tests — but he’s not stupid, he’s just meticulous! Next, Owen sets his sights on two firefighters who have gotten a lot of (viral) attention in their respective cities: Marjan (Natacha Karam), a fearless and insubordinate Muslim woman from Miami, and Paul (Brian Michael Smith), a brilliantly intuitive black trans man from Chicago. The good news is, these characters are really promising and are far more interesting than the show’s leads. The bad news is, they haven’t been given a whole lot of breathing room to develop that potential so far. The worse news? I watched two hours of this show, and couldn’t have told you Marjan’s or Paul’s name without looking them up on IMDb first. There is even a scene during the recruitment montage where Owen basically has to promise that he sees Marjan as more than just a “Woke Prop” — and yet the show falls into that exact trap with how it treats the characters.

It gets a lot of mileage out of pitting this team against small-minded Texans who are so blinded by what these characters are that they can’t see who they are — but then it puts us in that very same position by giving us no other characteristics with which to identify with them. Not even names! Which made it all the more frustrating when the show stumbled into what was probably the best scene of the premiere: Owen giving an impromptu tutorial on exfoliation and moisturizing to Paul, whose hormone meds give him acne. The scene managed to sidestep some sort of “skincare savior” vibe and instead centered its lighthearted male bonding on Owen’s (and by extension, Rob Lowe’s) over-the-top vanity. It was a sign of everything the show could do right… if it would just say Paul’s, and Marjan’s, names.

The final member of the team is, of course, Judd — only it takes a while for Owen to agree to hire him, on account of his trauma. While the show may be ham-fisted about diversity, it does some fairly unexpected things in its exploration of masculine identities and the way it plays with our expectations. The fancy city slicker vs. the good ol’ boy dynamic isn’t as obvious as it first appears. Judd spends most of his time during the first two episodes in tears, and then in therapy, while Owen refuses to open up about his cancer diagnosis and instead puts all of his energy into worrying about what he’ll do if he loses his hair. Neither one is as closed-minded, or as open-minded, as you’d think — and for some reason, Owen is a flawless line dancer!

Did I mention Liv Tyler is in this? She is, and she’s Maddy-levels of effed up. Her character, Michelle, is introduced causing a public disturbance on some dude’s doorstep, accusing him of being involved in her sister’s disappearance and promising to harass him until she gets satisfaction. So naturally, she’s the EMT Captain! Yup, turns out Austin keeps the firefighters and the medical responders separate, so Michelle and Owen are sort of equal and opposite presences for Station 126. By the second episode, she’s trying to get answers from a local mystic, because why not, and I’m not sure if I care about her character at all but I will say Tyler’s breathy voice is very soothing. Like, in emergency situations, I’d find her calming? I dunno. Obviously she’s sorta hate-flirting with Owen, so that’ll maybe be a thing down the road.

Clearly I have some reservations about the plot of 9-1-1: Lone Star, but if I’m being honest, that’s really all secondary to the series’ biggest fault: THE LACK OF INTERESTING EMERGENCIES. I mean, OK, there’s the fertilizer explosion, and there’s another explosion involving an apartment building and a paranoid resident who won’t leave. There’s a car accident where a baby gets flung up into a tree, and a dude who chokes on a Carolina Reaper hot pepper. It’s like they didn’t even try! The closest thing to a good old-fashioned 9-1-1-style tapeworm & bath salts case is the one where a bunch of office drones develop Mad Hatter’s Disease and try to throw themselves out of windows, because a caterer poisoned them with mercury (the punchline? “They didn’t tip.”). To be honest, I was gonna count that one as a win, except that it’s supposed to be a showcase of Paul’s deductive reasoning and instead he asks two people if they brought their own lunch to work that day, and then lifts the top off a sandwich to reveal a puddle of mercury. That would have been fine on any given CBS procedural, I guess, but if you’re gonna call yourself a 9-1-1 show, you better deliver the batsh*ttery with the panache to which I’ve become accustomed.

I suppose now is the time when I should tell you whether 9-1-1: Lone Star is worth watching, but the answer is… I dunno. I mean, I’ll be watching, because Dustin makes me and that’s my lot in life. The optimist in me knows there is the possibility that, with the groundwork laid, the show could settle in and improve over the next 8 weeks. At the very least, maybe it’ll eventually give me the bull-goring I so desperately crave? Of course, the cynic knows that it mostly doesn’t matter what 9-1-1: Lone Star does, because it’s just a mid-season placeholder until the real thing comes back in March. This show is hardly a fitting replacement, but if you’re in the mood to while away the weeks with knowing jokes at Rob Lowe’s expense, then Lone Star has you covered.

← On 'Manifest,' Saanvi Discovers The Mole is Her Therapist Who Is The Major | Yikes, 'Hunger Games' Prequel Novel Reveals Former Villain as Its Protagonist →