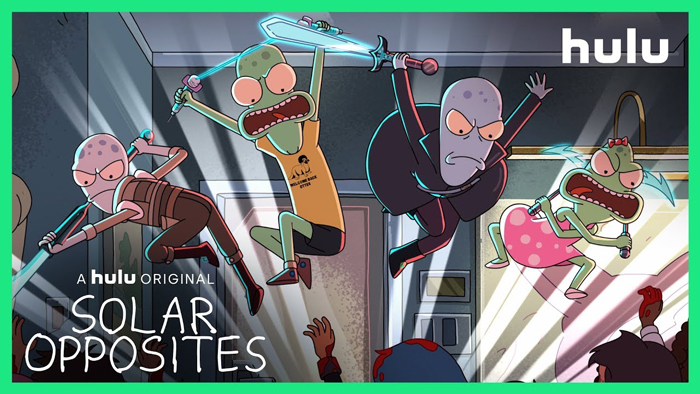 The Adult Swim hit Rick and Morty features an odd couple racing through outer space on wild, sci-fi adventures. Take that premise, flip and inverse it, and you’ve got the rough outline of Solar Opposites, the new cartoon from Rick and Morty’s co-creator Justin Roiland and former head writer Mike McMahan. This Hulu series centers on an odd couple of aliens who’ve crash-landed on Earth, where they have wild misadventures that combine sitcom tropes and sci-fi flourishes. It’s familiar in its setups, then gleefully demented in its executions. Which is all to say, it’s a whole lot of demented fun.

In a zippy introduction, Korvo (Roiland) explains that his planet was on the brink of destruction when he and his assigned mission partner Terry (Thomas Middleditch) escaped with their replicants, Yumyulack (Sean Giambroni) and Jesse (Mary Mack), on a mission to settle on a far-flung world. Shipwrecked on Earth, Terry and Jesse have fallen hard for human culture, relishing television, novelty t-shirts, and social climbing. Korvo and Yumyulack are less enchanted. The former’s focus is on the mission to rebuild, while the latter is studying captured humans through a series of slapdash and horrifying experiments. Together, they make a quirky family unit that bickers and bungles, but ultimately will pull together in a crisis. For instance, when the kids have accidentally turned all their classmates into flesh-craving “Crazies.” That’s when a pretty standard “get cool quick” sitcom scheme spins hard into sci-fi spectacle, complete with graphic violence, flashy weaponry, and a flurry of f-bombs.

Like Rick and Morty, Solar Opposites has a provocative sense of humor that embraces anger, lust, violence, and blatant stupidity along with scads of allusions to all kinds of pop culture. Everything from Fraiser to The Other Limits to Slenderman and the Gone In 60 Seconds soundtrack gets namedropped. Then, there are ghoulish gags about drug use, sex, and lobotomizing a bully with soda pop. Plenty of these bits bring zing and lots of laughs. However, the richest humor in this fish-out-water comedy is how it subverts sitcom tropes like the nagging wife versus the man cave, winning over unfriendly neighbors, and grown-ups going back to school. If you grew up watching shows like Perfect Strangers, Full House, and My Two Dads, you’ll likely recognize then revel over these bonkers parodies.

True to its sci-fi roots, Solar Opposites isn’t all silly back-to-one sitcom plots. There are two overarching threads that weave through its first season. One revolves around the Pupa, a yellow, worm-like creature that is treated like a mischievous—but oft overlooked—pet. However, this critter has a doom-bringing destiny as well as a curious mission of its own. The second plotline is smaller and stranger, culminating in a bottle episode that is essentially Solar Opposites’s version of “Tale From the Citadel.” All this brews intrigue amid the zaniness, offering tempting possibilities for Season 2.

All in all, Solar Opposites is a goofy, gross, and gleeful comedy that plays as a twisted love letter to sitcoms. It’s like Rick and Morty in its outrageousness, guest star gets, and sci-fi insanity. However, it’s not as philosophically dark or emotionally raw as its cartoon cousin. While its anti-heroes are reckless and self-sabotaging, the daffy sitcom vibe wouldn’t jibe with the maudlin act breaks or tearful outbursts that peppers Rick and Morty. Sure, there’s plenty and death and destruction here, but there’s little dwelling. Which suits this comedy’s just fine.