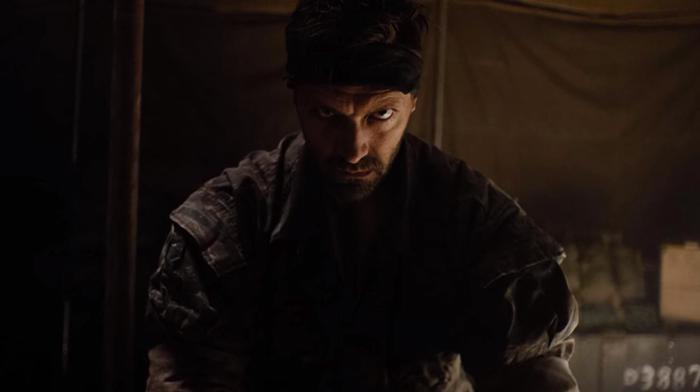 Review: Netflix's 'OATS STUDIOS' Is Bleak, but Is It Scary?

Many great horror stories defy explanation. Normal people brush up against incomprehensible evil so powerful it warps the fabric of reality. Omnipotent beings play with humans like cruel children play with bugs. Their reasons are their own, and we will never understand them. There are great examples of cosmic horror out there - Event Horizon, The Endless, the first Hellraiser. There’s also a lot of terrible stories because bad writers dig cavernous logic holes and leave them to trip up the unwary viewer.

The stories in Oats Studios, if you can call them that, run the gamut between these extremes. They’re less stories and more vignettes, nasty little moments snatched from a universe cruel but not uncaring. It cares very much about your pain and wants to maximize it. Their effect is aided by their brevity; the longest story is 26 minutes, and the shortest barely 4 1/2. Few feature anything so mundane as a beginning, and none have a conclusion. This is not the series for you if you have to know how a story ends. It’s also not for those easily grossed out by body mutilation. Very few end without at least one poor soul pulled apart like a Thanksgiving turkey. But if you like bleak, hopeless flash fiction, then it’s worth checking out.

Neil Blomkamp’s hands are all over this and it shows. The body modification\horror is very reminiscent of both District 9 and Elysium. The effects are all pretty solid quality, and some entries are fully CGI. It’s the one thing that makes sense, as Blomkamp got his start as a 3D animator. The familiar themes of racism, economic inequality, and religious zealotry are rooted in every episode.

The two strongest episodes also happen to be the longest. The first episode, “Rakka,” immediately sets the vibe for the series. An alien invasion and ongoing terraforming of earth have left it almost inhabitable. There is no hope for the future of the human race, reduced to terrorism and guerrilla warfare as they try to take as many invaders with them as possible. So alien are the invaders that their bodies ripple and change; their black, hostile atmospheric converters stretch into the stratosphere and blanket the world in toxic fog. Brutal brainwashing and body modification without anesthesia are simply part of the process, no more remarkable than a man killing cattle all day in a slaughterhouse. In this world, Sigourney Weaver treads like an exhausted Ripley who’s accepted her inevitable fate but refuses to lie down and die. And if fighting for survival requires human sacrifice along the way, that’s how it is. 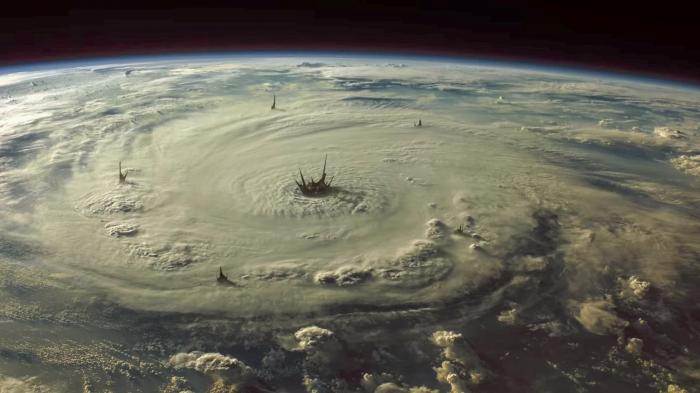 “Firebase” is set in-country during the Vietnam War. An innocent villager is turned into something wrong after suffering catastrophic loss. It would smack of white savior syndrome, particularly given who was responsible for the atrocity, were it not for the fact the “white savior” is very clearly at the mercy of similar forces.

In “Cooking with Bill,” a pair of infomercial hosts cook with a series of diabolical kitchen accessories. Do not watch this if you have a weak stomach for people eating gross shit. It effectively shows us a personal hell, but my gag reflex was triggered several times. I will not watch it again.

“God: Serengeti/Chicago” gives us a fickle God playing with His creations. You know, life.

“Zygote” would be a 90 minute SyFy production if it weren’t a 22-minute Neil Blomkamp experimental film. Miners in an arctic environment discover a light that drives people mad and brings horrific creatures to life. It’s Dead Space on land and a bit hokey.

“Adam: Episode 2” and “Adam: Episode 3” make slightly more sense if you watch “Adam: Unity” here on Youtube. I do not understand why it wasn’t included. Robotic slaves are granted freedom; sick humans in a post-apocalyptic landscape are promised salvation by a mysterious prophet if they renounce all technology.

“Gdansk,” the shortest episode, shows us a desperate farmer protecting his family from crusading invaders.

Oats Studios is brief, bleak, gory, captivating, and not for everyone. I dug it. But it’s not remotely frightening. Perhaps it’s the rapid-fire nature of the episodes; perhaps no possibility of a happy ending brings acceptance. We have no time to get attached to the characters and no time to build tension. That’s not a weakness if you don’t go in expecting something more like Tales From the Crypt or The Outer Limits. Go in looking for bite-size scenes and that’s precisely what you’ll get. Whether you will enjoy it is entirely up to you. I’ll watch “Rakka” and “Firebase” again, mostly to see what I might have missed the first time through. The others, not so much. I will absolutely watch another collection, should Blomkamp et al release it. Sometimes a person just wants to be creeped out for a while. On that, Oats Studios delivers.


← For Their Next Big Bad, 'Fear the Walking Dead' Promotes from Within | Review: 'The Last Duel' Is a Shockingly Empathetic Story of Male Ego and Violence, and It's Ridley Scott's Best Film in Years →