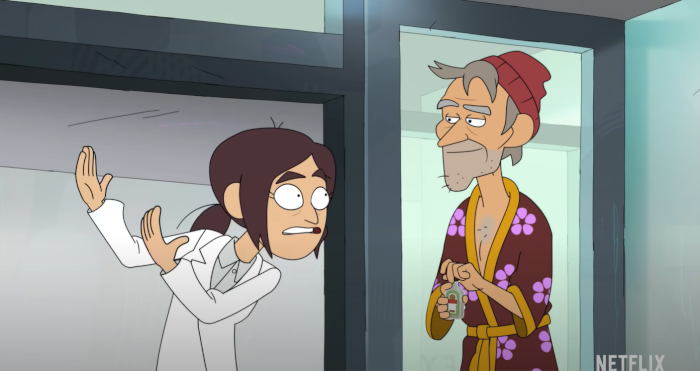 Review: 'Inside Job' Provides a Few Hours Entertainment But Not Much Else

Inside Job immediately felt familiar. From the animation style to the cast and basic plot, it retreads conventional ground from start to finish. To its credit, it does this in mildly amusing ways. I spent 5 hours marathoning it while baking and getting baked, which was the right choice. I didn’t worry about missing plot points because, well, there aren’t many.

Cognito, Inc. rules the world. Technically a shadowy cabal of masked one-percenters rule the world and Cognito, Inc employees are the grunts who make sure no one figures out the earth is hollow and Atlantis is real. The conspiracy theories are true, you see. All of them, except for the Flat Earth theory. There are shape-shifting lizard people and sasquatches (sasquatchii?) and sapient mushrooms. Kennedy was killed by a government assassin and while we did make it to the moon, the landing everyone saw on television was fake. Reagan Ridley (Lizzy Caplan), a misanthropic genius with barely-concealed megalomania, struggles to keep things running smoothly while fuming over how little she’s acknowledged. She does this with the help of a team one bad acid trip away from spilling every secret on national television. Gigi (Tishi Campbell), social media maven. Andre (Bobby Lee), the genius inventor who is constantly high on something. Glenn Dolphman (John DiMaggio), the half-human, half-dolphin military experiment. And Magic Myc (Brett Gelman), the talking, psychotropic mushroom. Her father Randy (Christian Slater) is a selfish, alcoholic bastard who only ever thinks of himself and her boss JR (Andrew Daly) is an unpleasant combination of heartless CEO and corrupt bureaucrat. Into this stumbles Brett (Clark Duke), the mediocre young white man brought in to co-lead with Reagan thanks to her complete lack of social skills. He’s dumb and desperate for approval, but attractive enough he can get away with basically everything. 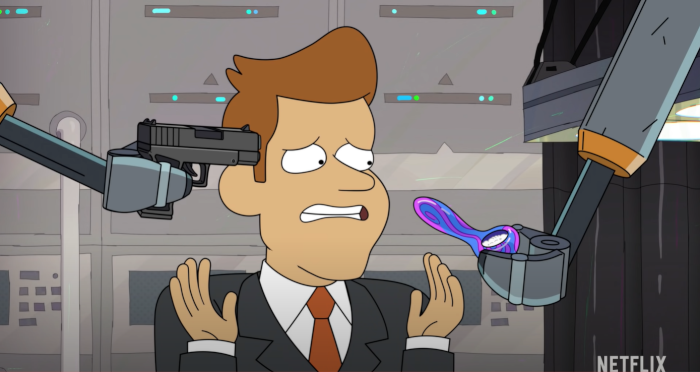 If all this sounds like something you’ve seen before, it’s because you have. It’s a little bit Rick & Morty and a lot American Dad and Gravity Falls with more cursing. The last one makes sense; it was created by Shion Takeuchi and Alex Hirsch, who wrote and created that quirky little Disney channel hit back in 2012. I love Gravity Falls and it’s no surprise Inside Job’s best moments are the ones most reminiscent of that show. Reagan is mostly Mabel once the disillusionment and moral rot kick in. Dipper’s a lot smarter and determined than Brett, but they’ve got the same heart. Magic Myc is a fungal Roger from American Dad; Randy wishes he was more than a poor man’s Rick Sanchez. There is nothing original here. Reagan and Randy’s experiments inevitably blow up in their faces; there’s a moral to be found at the end of each episode that rarely carries over to the next one. To their credit, the first ten episodes found in Part One form an overarching storyline that mostly works. The characters do grow a little bit. Most of the humor, such as it is, comes from Reagan’s attempts to humanize herself, usually by dating a robot or drugging her coworkers. The conspiracy theories gags just aren’t funny, with the exception of Buzz Aldrin’s moon sex cult and Randy’s manipulation of the Flat Earth Society. It was easier to laugh at the foil-hatters before I knew they made up a solid third of the population.

To be fair, the show is amusing. Most of that comes from Lizzie Caplan and Christian Slater’s performances. Slater clearly has a blast playing the amoral sociopath whose every action best serves himself. Caplan’s Reagan is very much her father’s daughter but constantly fighting her tendencies toward selfishness for the betterment of her team. Brett is the best of the supporting cast; he doesn’t know what he’s doing but by god he’ll do his best for the smallest hint of recognition. The rest are entirely one-note. Oh look, Andre’s making a joke about being high again. Gigi’s just made a cutting remark. Glenn wants to bomb something. Myc needs someone to jerk off his tentacles (don’t ask). 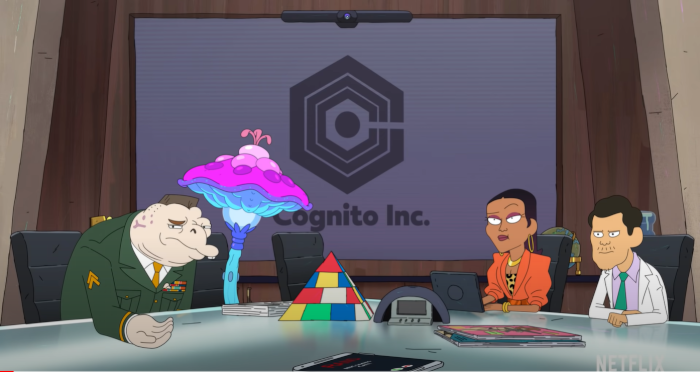 If you like crass adult animation with a generic animation style like Disenchanted, you’ll be mildly amused by the 10-episode Part One currently available. There’s no release date for Part Two yet but IMDB already credits Hirsch with 20 episodes, so I assume the rest are on their way in the next six months or so. I’ll watch them but more because they’re there than any deep interest. I genuinely hope they’re an improvement; Hirsch and Takeuchi bought a lot of goodwill with Gravity Falls and I want good things for them. The potential is there. If they lean into the weird and indulge in some character development they could make something special again. Until then, well, there are worse shows to get stoned to.


← How Matt Farley Makes Over $65,000 Dollars a Year Writing Songs About Poop | 'Succession' Episode 2 Recap: All the Pretty Trojan Horses →