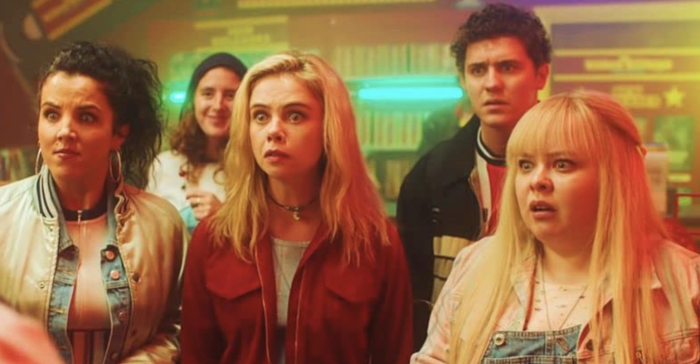 Review: The Third and Final Season of 'Derry Girls'

“But the thing is, life isn’t fair. You see, injustice is something I have become accustomed to. I am, after all, a child of the crossfire, surrounded by conflict. But I choose to rise above it. The path to peace is paved with tolerance and understanding. Violence is never the answer.” reads Orla (Louisa Harland), from Erin’s (Saoirse-Monica Jackson) diary, as the Derry Girls pilot closes. Nearly five years later, the first episode of the now beloved show’s third and final season opens with a similarly sincere voice over: “They told us we were young, yet we understood the enormity of it. We understood what was at stake. Our fear was replaced with something altogether more terrifying … Hope. Hope is so much worse. With hope you have something to lose …”

The third season of Derry Girls, a Channel 4 comedy, played in Ireland and the UK throughout April and May. However, self-identifying “Derry Girls” in the US have had to wait until today this week for the Season 3 Netflix streaming premiere. Before carrying on I must note that I am one of the aforementioned self-identifying “Derry Girls” and am hardly impartial when it comes to these four girls and “the wee English fella”. The five-episode season originally aired weekly with a one-hour special premiering the day after the fifth episode’s release (May 17th and 18th). Netflix, however, makes no such distinction, listing the special as Episode 6.

For those unfamiliar with the show, Derry Girls is about a group of teenagers growing up Catholic in Derry (Londonderry), Northern Ireland, in the 90s, and subsequently through the last years of the Troubles. We follow Erin, a wannabe intellectual, her cousin Orla, a delightful weirdo, their friends, nervous but lovable Clare (Nicola Coughlan), Michelle (Jamie-Lee O’Donnell), who is more than a little crass, and Michelle’s English cousin, James (Dylan Llewellyn) (James attends his cousin’s all-girls school because “there was concern for his safety, because [he] happens to be English”).
Derry was long controlled by unionists, or as most of the show’s characters refer to them, “the Prods” (the Protestants). The border town has a long history of discrimination against Catholics and saw some of the worst violence between Unionists/Loyalists (mostly Ulster Protestants) and republicans (mostly Catholic) through the thirty (plus) years of the Troubles. The social and political unrest is the backdrop of the teenagers’ lives. Season 2, for instance, opens at a “Friends Across the Barricade” retreat where the girls of “Our Lady Immaculate College” and the boys of “Londonderry Boys Academy” mistakenly take to calling out what makes Catholics and Prods different during a bonding activity. Suggestions include everything from, “Protestants are richer” to “Catholics really buzz off statues and we don’t so much”. My personal favorite comes via the “Differences” chalkboard, soon filled with the students’ earnest observations of each other: “Protestants think Catholics keep coal in the bath”.

Season 3 is filled with the Catholic school hijinks, Northern Ireland-specific references, boy craziness, and 90s nostalgia that, in the first two seasons, drew a devoted international audience to the relatively niche comedy. Colm (Kevin McAleer), Erin and Orla’s uncle who is so boring he could not even make being held hostage sound interesting, shines as the gang weaponizes his dullness in the first episode (the episode also features a cameo from none other than Liam Neeson). Sister Michael (Siobhán McSweeney) manages to weaponize her exceptionally dry wit and “I’ve got no time for this”-ness with such clarity that you might find yourself rooting for her as she calls the gang into her office or reminds an assembly that “Our Lady Immaculate” is a dictatorship and does not care about “rights.”


As the last season closed with President Clinton and the first family’s visit to Derry and the IRA’s ceasefire, many viewers were concerned with how Season 3 would fair given the sense of unrest omnipresent in the previous two seasons. Writer and creator Lisa McGee smartly grounds the final season in the Good Friday Agreement referendum in 1998. The show remains, however, first and foremost, about Erin, Orla, Clare, Michelle, and “the wee English fella” (James).

At its best Derry Girls relishes in the teen angst, antics, selfishness, and day-to-day activities that make high school comedies delightfully cringey. McGee brilliantly balances frenetic teen A-plots with the just as gossip-filled (but calmer) adult Bs. Granda Joe (Ian McElhinney) explains the Good Friday Agreement via chip bags, a cork board, and yarn in one episode and brutally antagonizes his son-in-law, Da Gerry (Tommy Tiernan), in the next. Orla and Erin’s moms (Tara Lynne O’Neill and Kathy Kiera Clarke) pull off an excellent flashback episode (which often fall flat). Unfortunately Nicola Coughlan, now more widely recognized as Bridgerton’s Penelope, must have had scheduling conflicts that forced her “Clare” into some strange (and sad) “the gang gets separated plots” and a lot of less-than-subtle solo shots of Clare weaved into group activities.

Although it is hard to beat Sister Michael’s savage remarks (this season when the gang mentions praying before getting their GCSE scores she says, “I’d say our Lord is up there now, looking down on the world, thinking the floods and the famine can wait, for there is a child in Derry who needs me to magically alter the contents of an envelope.”), Granda Joe shines as the season’s breakout minor character, serving as a near-seamless unifier between plot lines and peace talks.

Some other highlights I can’t stand ignoring: Orla falling in line with a group of young Irish Dancers, giving the standout dance performance of the season. The gang competes as the Spice Girls in a school production of Starz in their Eyes. In her signature ever-so-hateable fashion, Jenny Joyce (Leah O’Rourke) puts on a very SNL High School Theatre Show play about the Troubles. Dennis (Paul Mallon), usually only seen behind the counter at his shop, inexplicably works at the video store, in classic sitcom fashion. The entire gang dresses as Claire Danes’ Juliet from the Romeo + Juliet ball (an angel costume) for Halloween. Clare has a Juno style hamburger phone that is less than helpful during multiple call situations. And, a Season 2 plot point with incredible pay off.

Parts of Season 3 suffers from production issues too obvious to ignore. Scenes without Clare (or nearly without her) are a testament to the fivesome’s previously established dynamic. At the very least, I missed Clare’s almost violent hyperventilating meltdowns playing against the rest of the gang’s cycle of shenanigans and consequences. That aside, the final season of Derry Girls did not disappoint and surely solidifies the show’s place in television history (they were inducted after being referenced in an episode of The Simpsons). If not, who cares!? They are already part of the town and its history anyway!