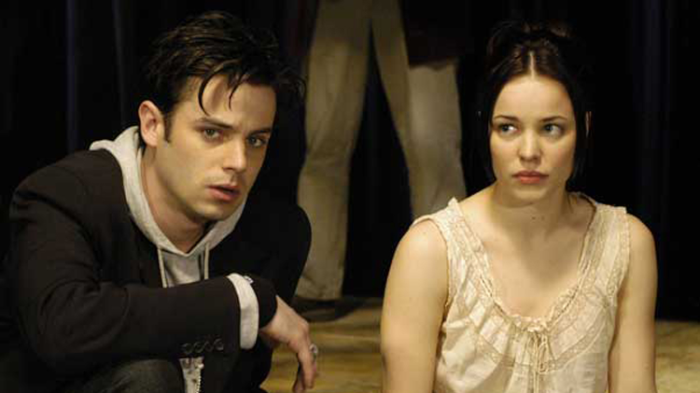 Review: 'Slings and Arrows' Is a Ruthlessly Efficient Killing Machine

Publisher’s note: We originally published this lovely review of Slings and Arrows from Wojciech in 2011, so a couple of references may seem outdated. We are republishing it all the same because 1) it is a phenomenal review; 2) it is a phenomenal, underappreciated series; and 3) it begins streaming on Acorn TV today. It is well worth your time.

Two things up front. One: I loathe the theatre. The self-indulgence, the ungainly intensity, the often inescapable pathos and pretentiousness, all of it. As far as I am concerned, theatre plays should be quarantined and only released into the world when supervised by Mike Nichols and/or Emma Thompson.

Two: I’ve been around. Enough to be frustrated that the Centauri Republic had an Emperor and deeply unsettled by how hot Ziggy Sobotka was in “Generation Kill,” to know that C.J. Cregg’s codename is “Flamingo” and wish I could forget ever seeing Cy Tolliver torture Veronica Mars. I watch a lot of TV.

So when I tell you that a series about theatre makes most of the above, and Simon Tam, look like idiot children, I want you to understand my full meaning.

Gushing lends itself to hyperbole, but I genuinely want as many people as possible to give this gem a shot, so I’ll try to maintain a semblance of objectivity. “Slings and Arrows” will not, in all likelihood, change your life. It is not the best series ever. It is, however, so impeccably written and acted, and so self-contained and purposeful in its execution that you might be led to think otherwise. At least for a few fleeting moments.

It is set at the (fictional) New Burbage Festival, in a sort of campus town, except one centered around a theatre instead of a university. It’s a big institution that has hit a rough patch. The artistic director, Oliver Welles (Stephen Ouimette), is pretty much going through the motions, as is the senior cast headed by the prima donna Ellen Fanshaw (Martha Burns), leaving Richard Smith-Jones (Mark McKinney), the “suit” of the operation, all but free reign. The situation changes when God throws a pig truck into the works, which results in the return of Geoffrey Tennant (Paul Gross), a brilliant actor-turned-director who infamously left the Festival after suffering a nervous breakdown on stage.

And thus the whirligig of time brings in his revenges.

The whole thing is thoroughly Canadian and was written by three people: McKinney, Susan Coyne, and Bob Martin. It consists of three series of six episodes, each season built — literally and thematically — around a different Shakespearean play: Hamlet for youth, Macbeth for the middle age, and King Lear for the autumn years. The key piece of information here is that the three writer/creators wrote every single episode, and that it was a triptych by design, plotted out in advance. What it means is that the writing is airtight, and the abovementioned motifs are subtly echoed on multiple levels throughout each series (to give an example: one of the side plotlines of the middle season has the theatre desperately trying to rebrand itself). Also, there are no peaks and valleys, nothing “really hits its stride” or “finds its voice” halfway through. “Slings and Arrows” is a ruthlessly efficient killing machine, with every plot point struck at its most resonant, and then neatly wrapped up.

In other words, it’s the sort of series J.J. Abrams would run away from, screaming.

The show offers a comprehensive look at theatre life, from boardroom politics, sponsorship pageantry and marketing efforts, through direction, production, and set design, all the way to the crazy dynamics of acting. But it’s a character piece at heart, and the characters have a lot of it. There are a couple shows like “The Wire,” where pretty much everyone seems fully fleshed-out and three-dimensional. “Slings and Arrows” puts a different twist on perfectionism: here even peripheral caricatures are thoroughly engaging. You have a Hubertus Bigend-esque head of an ad agency who adds faux depth to his utterly nonsensical ramblings by punctuating them with a grave “Richard Nixon said that”; an aging TV actress who, while recording an interview, glides through the whole line “Naturally it’s all about the theatre and the actors and can we do that again I sounded like a retard” astride the same, practiced smile, not even bothering with a comma; and of course there’s Darren Nichols, deconstructionist extraordinaire, director of Humpty Dumpty: the Musical (very dark, very intense, the Dutch went crazy for it!) — a recurring character you’ll probably find yourself cheering whenever he appears on the screen.

But for all the hilarity, it’s clear that the writers really love these people, and there are plenty heart-wrenching moments - especially in the third, final season. The peculiar thing is that the comedy and the drama seem to occupy a single space here. Whereas people like Joss Whedon like to mix them up by undercutting pathos with a tiny pinch of humor just before it reaches critical mass, the creators of “Slings and Arrows” somehow made them flow seamlessly alongside one another. I believe the established term is “alternating between comedy and tragedy,” but that seems to imply modulation, and this is more of a fusion. One scene comes to mind, in which two older actresses invite an ingénue for a night of sage advice and margaritas, and one ends up absolutely destroying the other in a hilarious, passive-aggressive drunken tirade, pointing out the many shortcomings of her life. The scene ends with the belligerent drunk going for a refill, leaving the other two in a bubble of mortified, uncomfortable silence, finally broken by the battered actress’ defensive, “But I amhappy.” The ingénue — heartbroken and abused at work — manages a smile and with almost palpable desperation replies, “I know. Me too.”

A quick word on the cast: it’s superb. A couple more, slower words: the core is made up of Burns, Coyne, Gross, McKinney, and Ouimette, who are featured in all three seasons. Gross and Burns are actually married in real life (gee, wonder why they didn’t hyphenate) and their bristling chemistry is spectacular. Ouimette matches them with ease and some of his interactions with Gross are pure gold. As for Coyne and McKinney, it’s interesting to see what types of characters they wrote for themselves — the asshole and the moral anchor of the piece — and since I ran out of superlatives several sentences ago, let’s just say they’re also very good. The rest of the cast changes from season to season, and serves as a who’s who of Canadian acting. Series one features — among many, many others — Rachel McAdams (playing what I like to imagine is a version of herself), series two has Colm Feore and (briefly) Arsinee Khanjian, and season three — Sarah Polley (also playing what I like to imagine is a version of herself). The only (marginally) weaker link out of the principal cast seems to be Luke Kirby, but even he is more of a head-scratcher. While he’s great as an American action star, and his scenes with McAdams are fantastic, the Hamlet bits aren’t entirely convincing. Then again, he’s an actor playing an actor who is supposedly not that great at playing a certain character and meta hurt Grok’s head, so you be the judge.

You may have noticed that I haven’t addressed the Shakespeare in the room. That’s mostly because I really don’t feel qualified to comment on that aspect of the show. If you have a deeper appreciation for the works of the immortal bard, you might like the series even more. And if you’ve actually worked in theatre, it’s possible you’ll make a full 360 on the bliss spectrum, pop out on the other side and randomly punch someone in the throat - you have been warned. Being a theatre nerd, however, is not required, as the whole thing is carried easily by the human factor. There’s this scene in the first season finale, which takes place just after the opening night. A director and an actresses sit in her dressing room, idly chatting about the show, when she half-jokingly implores him not to make her play the nurse just yet. He replies, somewhat less casually, that he was thinking more along the lines of Cleopatra. In that moment, the screen implodes. Her reaction is simple enough — “I would like that very much” — but somewhere between those words, the shell cracks, and all her myriad insecurities momentarily snap into focus before being washed away by the mere sound of that name. And I think it’s a testament to the writers’ skill that by then, even If you’re a troglodyte like me, you not only realize the dude just told her that he still loves her - you really fucking care, too.

Wojtek lives in Poland, where rainbows are gray. Sometimes he likes to think he does other things as well.

← Kate Hudson Is Keeping it in the Family With Brother Oliver | Just Remember, Boy George, Shutting Up Is Also an Option →