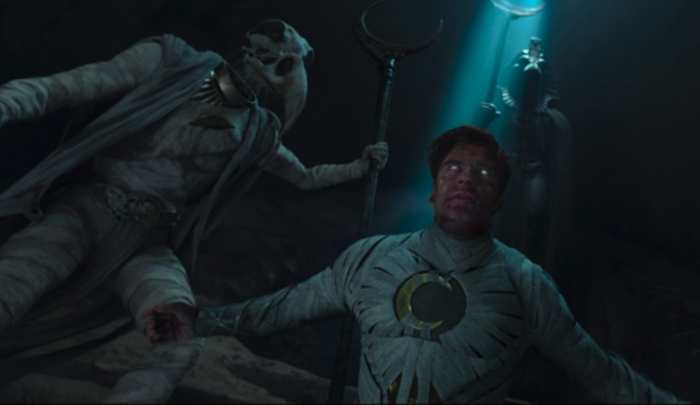 Penultimate episodes are tricky things. They can be the calm before the storm, setting up an action-packed finale, or they can BE the action, the way Game of Thrones staged the Red Wedding during episode nine so there’d be an episode left to explore the fallout. Moon Knight’s penultimate episode, “Asylum”, could be construed either way, depending on what you think the show is about. If you’re anxiously wondering what destruction Harrow is getting up to on Earth, then this week’s installment may have been a frustrating bit of navel-gazing for you. But if you’re like me and you’re basically only here for the navel-gazing, especially when it’s the navels of multiple Oscar Isaacs we’re gazing at, then good news, folks — this might be the strongest episode of the season!

Don’t get me wrong — taking this little time-out to fill in the gaps in the Marc/Steven history means that Moon Knight is going to have a LOT of ground to cover to wrap up this show next week (like, you know, bringing Marc back to life!), and I’m not entirely sure how they’ll stick that landing. Probably with a big CGI punch-em-up, which seems to be the MCU’s go-to move with these show finales. Of course, I’ve been bored with the plot since the second week if I’m being honest. The plot is the weakest part of the show, in that it has always seemed completely perfunctory to the character work. What’s kept me tuning in each week was to see the shifting power dynamic between Steven, Marc, and to a lesser extent Khonshu — or whoever else might be taking up space in that beautiful tousle-haired noggin. And in that respect, “Asylum” isn’t so much the penultimate episode as it is the centerpiece of this show. It is all about that brain, those personalities, and the truth of WHO this man really is. It’s also the most stylistically interesting episode since the premiere, in that it tells its story by see-sawing between the two versions of reality established during the last ten minutes of last week’s episode — where Marc finds himself in a mental ward under the care of Dr. Harrow, and also finds himself face-to-face with the Egyptian hippo goddess Taweret. Is Marc actually in a hospital, or is he being guided through the Egyptian underworld?

The key to the episode comes from an early scene between Marc and Dr. Harrow, as Harrow continues to probe the source of Marc’s delusions. His theory is that Marc is constructing an escapist fantasy sourced from visual clues, a sort of mental shelter Harrow refers to as an “organizing principle.” Of course, Marc pretty quickly picks up on the fact that his organizing principle — his shelter — is actually this whole mental asylum set-up (get it?!). The idea that the mess of his life is just in his head and could be treatable is infinitely more comforting than the reality that he’s dead and sailing through the afterlife with his alternate personality and a hippo. Unfortunately, both realities seem hell-bent on making Marc confront some painful truths he’d rather leave hidden, and his discomfort becomes the trigger for him to jump settings.

The real reality, such as it is, is with Taweret, who is indeed a goddess of women and children and who also is guiding Marc and Steven through the Duat — the Egyptian realm of the dead. They’re on a boat sailing through a sea of sand where the unbalanced souls spend eternity, and it is Taweret’s job to weigh Marc’s and Steven’s hearts on the scales of justice against the feather of truth to see if their souls are also unbalanced, or if they’re fit for an eternity in paradise. Her scales, like Harrow’s tattoo, can’t seem to get a lock on Marc, though — they teeter back and forth, unable to determine the weight because their souls are incomplete.

[Yes, I spent the entire episode thinking Marc needed to go open that extra sarcophagus and free the secret personality and add his heart to the scale, and no — it didn’t happen. Did I make that whole thing up?!]

If the scales don’t balance before the end of the journey, the unbalanced souls in the sands will board the ship and drag Marc and Steven away. So like, there’s a ticking clock. Adding to the sense of urgency are the hundreds of unbalanced souls entering the Duat from Earth, courtesy of Harrow and Ammit’s big plan, so Taweret agrees to redirect the ship toward Osiris’s gate — the only path back to the world of the living. But to pass through the gate, they need to balance the scales, so Marc and Steven need to go back inside to that hallway of doors and explore their memories, looking for the missing pieces that will make them whole. It isn’t so much memory loss, though, as it is memories that Marc has been keeping hidden from Steven. In both the mental asylum reality and the afterlife journey, the only path forward seems to be breaking down the barriers between these two personalities to bring them closer… or closure.

Some of the scenes we witness are confirmations of what we suspected, such as the death of Layla’s father. Marc actually tried to save her father and everyone else at the dig site from his crazy boss, but they were caught and killed anyway — and the “dig site” was Khonshu’s tomb. We witness the moment Marc, who dragged his bloody body to the foot of Khonshu’s statue, agrees to become the god’s avatar of vengeance — and Steven points out that Khonshu manipulated him. The big hero-reveal moment as Marc is resurrected as the Moon Knight is hilariously cut short as Steven gets distracted and leaves the memory, which was a great little touch.

Another thing the episode confirms is that Marc is the original personality, and Steven is the creation. When Marc was a child, he was playing in a cave with his younger brother during a rainstorm and the boy drowned, and Marc’s mother blamed him for it. She became an abusive alcoholic, and it was during one of her violent outbursts that “Steven” emerged — a personality based on Marc’s favorite movie adventurer (“When danger is near, Steven Grant has no fear”). In the beginning, it looks like Steven was the shield personality who would emerge in times of distress to take the pain and protect Marc, except that Steven has no memory of any of the pain. Rather, we’ve seen time and again how Marc tries to protect Steven from pain, probably so that there is one part of his psyche that can be happy and carefree. Specifically, Steven does not have any memory of a brother, and he certainly doesn’t remember his mother being anything other than loving — and alive.

Though Marc remained in primary control of their body for most of their life, the balance shifted when his father called to tell him that his mother passed away. Unable to attend her shiva or process his grief, Marc collapsed — and Steven emerged, entering a period where he was the dominant personality and Marc operated from the shadows. This also explains why Steven was always leaving his mother a voicemail, always seeming to just miss her. He didn’t know, or didn’t acknowledge, that she’d died.

The episode is structured around revealing Marc’s hidden truths, but the focus is largely on Steven’s emotional journey through them — it’s his origin story much more than it is Marc’s. And it also becomes his swan song.

The more secrets Steven learns — the more complete his and Marc’s hearts become — the closer the scales are to being in balance. Unfortunately, they don’t quite make it in time, and as Taweret’s ship comes to a halt before the gates to the overworld Marc and Steven are attacked by the unbalanced souls. Marc does what he always does, wading in fist first, while Steven stays on the sidelines. Just when it looks like Marc is a goner, though, Steven gets the courage to stand up and join the fray — because everything Marc can do, Steven can do too.

Steven saves Marc, only to tumble overboard himself, frozen in the sands forever. And Marc, now whole and wholly alone in his heart, finally achieves the balanced scales he needs to escape the underworld.

Now he just needs to figure out how to reconnect with the imprisoned Khonshu and heal a bullet wound and stop Ammit. But that’s a worry for next week!

— We see clearly how manipulative Khonshu is, but one question that pops up in the comics is how far back his manipulations began. In the childhood memory of Marc and his brother going into the watery cave, Steven notices a bird skeleton in the grass on their path. What if Khonshu had some influence over the events of Marc’s childhood — the same events that fractured his mind and made him an easy target in the future?