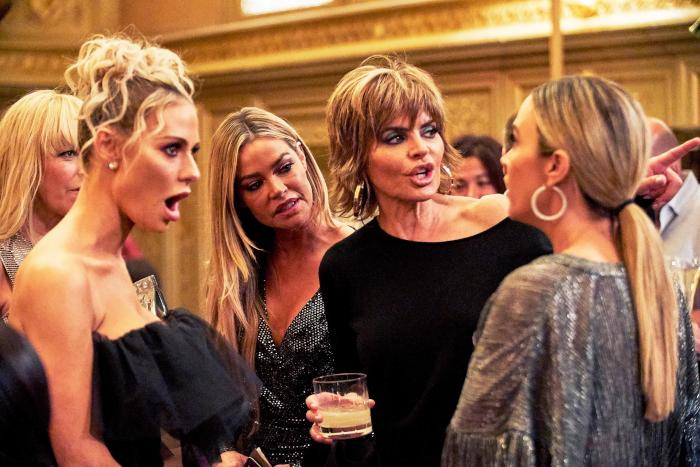 I came to Real Housewives and Bravo as many other white gays like me have: I made a bunch of queer friends who all watched Housewives and/or Drag Race and talked about it, and I really wanted to find community. On my own, I absolutely don’t give a shit about the lifestyles of the rich and famous. I’m not trying to imply I sprung into being fully moral and superior, but great splashy expressions of wealth have never done it for me. This isn’t to imply that I suffered in silence here. Real Housewives can be a blast. I doubt I would be moved to write about it at all if I didn’t get something out of it, but ultimately I got a lot more out of the community of friends watching than the shows themselves. Nowadays, I’m not exactly what can be termed a “fan” of Housewives or of Bravo, but it’s a topic with more layers and depth than you may think.

In a course I took back in college called Sociology and Media, we established a core definition of art that went as follows: All media is art because it contains the expression of a worldview and because of this, all art is inherently political. It’s interesting to consider even the connotations of the word itself. It’s used as an indicator of quality or creativity, like an honor we bestow upon only the worthy. However, this definition sees it more as a workmanlike noun. “Art” isn’t a qualitative judgment, it just is.

Was there any part of you that recoiled at that idea? Did it feel incorrect on some level to use the word “art” to describe trashy reality TV, like you’re cheating on your own taste? It’s OK! We all live in the same confusing cultural soup with no end of illogical and contradictory values.

If we’re saying that Housewives is art, then Housewives must have a worldview in it, right? And it does! In a twist shocking to no one, the world of Real Housewives across its various franchises is quite conservative. There’s a series of assumptions that pervade Housewives: capitalism is great, generational wealth is great, conspicuous consumption is a goal unto itself, signaling status via material goods is a life’s work, gay men (preferably white) are fine provided they mind their place as a handbag or a yassing sidekick, queer women are strange alien mysteries that will destabilize our maybe Godly and definitely and resolutely heteronormative reality as we understand it, traditional gender roles are sacrosanct, being single/unmarried/not engaged is inherently sad and a reflection of your poor worth. It’s worth noting how this conservatism presents itself with the racial makeup of the cast changes. On the shows Bravo deigned to desegregate, there are different added assumptions like: racism is an issue that mainly exists in the past, BLM is agitating for no reason, hearing about the experiences of BIPOC is inherently “boring.”

Someday, I’ll dig into the conservative funhouse-mirror world Bravo has constructed and how they maintain it by cultivating a more conservative if-not-outright MAGA audience, and how this plays an interesting game of cognitive dissonance when you consider how many self-identified progressives consume this media that’s pretty bigoted in many ways, but suffice to say: Housewives has more socio-political pandemonium going on than you’d think!

Whether the average Housewives viewer knows it or not, they’re consuming art with a lot to say about how our world is and what the world should be. There are so many angles to take with the Bravo prism both lofty (it engages with racism, sexism, gender roles, class warfare, queerphobia, politics) and not (wildly tacky clothes, cringey sponcon for Buca di Beppo, absurd McMansions), but there’s something fundamentally wild about viewing/treating real human beings who are ostensibly acting as themselves as fictional characters. It produces a bewildering dynamic rife with contradictions and all of this comes from garbage reality tv!

Real Housewives has a huge audience. People across the states watch it, they fly to New York for an overpriced convention called BravoCon, they trawl Facebook groups dedicated not just to Housewives or Bravo itself, but to podcasts that cover them. That means something. It gives Housewives weight. Thousands of people consume this specific family of media religiously and then spend additional time talking about it online. Whether or not they’re conscious of it, they’re regularly slipping into a deceptively heady and potent warm bath of capitalist propaganda.

This is especially interesting because I’ve heard umpteen Bravo viewers specifically reference its “non-political” nature, when that couldn’t be further from the truth. Even if art wasn’t inherently political, it’s so about politics! Bravo works a double-act in which their media is chock full of things to say about the world with pretty dramatic implications, but simultaneously insists on its low art status and therefore not that deep. They’re aided here by their audiences, both the people watching and those who don’t watch, but look in from the outside. Everyone in both groups agrees: This is some brainless bullshit.

They’re not wrong, but they’re also missing something. Implied by the term “brainless bullshit” is that there’s nothing to engage with because it’s too dumb to have thoughts. This is a blindspot fed by the notion that some things are ART with THINGS TO SAY and other things aren’t. All media is art and all media has something to say, but we decide arbitrarily which we recognize and which we don’t. There’s a sort of signaling (a cousin to virtue) happening there. It’s saying, “I am of this more intelligent breed that simply doesn’t see or acknowledge anything as art that sits below the line I drew.” I am very differently-minded on this point. Why would you close your eyes to the information in front of you? Because it’s “low art”? It’s consumed by millions of people who consciously or unconsciously internalize values that shape their worldview. Those people go out into the world to enact that worldview, consciously and unconsciously.

There’s a case to be made that despite being “TV for women and gays” (and don’t think I don’t see the shades of misogyny and queerphobia in our collective tendency to dustbin media aimed at those groups as cheap or unserious), Bravo popularizes and normalizes a great deal of classic bigotry and the brand new MAGA flavor. It begins to feel less like low art and more like a Trojan horse, whereby political values are communicated and validated. We shouldn’t and can’t close our eyes to that. Speaking as a motormouth leftist, it seems absurd to ignore a source of MAGA-fascist ideology that’s pumped out. If TFG taught us anything, it’s that fascism can be incredibly banal and stupid, but it’s no less present or powerful. There are some fascinating examples of the Bravo/Trump pipeline I’ll explore sometime. It’s even weirder and more complicated than you think.

So by now, I feel like I’ve done a decent job of demonstrating how Housewives is art, but if anything I’ve shown the truly not-okay nature of that: TFG, bigotry, Trojan horses, these things are gross! So how is it OK?

I’m so glad you asked! Because if all media is art, then the only guide you ever need to abide by is your own taste. Give yourself grace and let yourself love many things that might not all agree or align. Let yourself love brainless bullshit if you love it! There is no crime in that but the ones we imagine.

The real crime, one that’s committed by many many many fans of any given piece of media, is to love a thing blindly. Keep your eyes open. There are things about Housewives I love: they center women and their lives, women are allowed to be anti-heroes and act badly, men are rarely present (which is a gift because Househusbands are trolls), women of color are given platforms to speak their POV. I recognize these things while not taking my eye off the many (many) social ills it represents. If you love something as imperfect and inevitably problematic as reality television, you owe it to yourself to do so with full knowledge of its warts. And if taking those warts into account ends up turning you off to the show, then it’s for the better. It wasn’t for you. It asks that you compromise yourself unnecessarily to continue watching without baggage. Reality tv is cheap and plentiful anyway, why contort yourself to fit when you can just find something less shitty?

Real Housewives is, without snark, a mirror to many aspects of our culture. Millions of people tune in to see things like casual racism, homophobia/transphobia, sexism, etc. not only modeled but normalized. We discount and ignore that at our peril. By not applying the same lens to Real Housewives that we gleefully apply to our fave Platinum-Age-of-TV works, we miss a big voice that contributes to discourse and events in real life.

Housewives and the Bravo canon are a big, fraying rope, messy with so many threads to pull. I can write volumes untangling this mess or at the very least, documenting the mess and trying to make sense of it. I never imagined that Real Housewives is what would re-activate my inner sociologist, but here we are.

Chris Revelle is a chatterbox with a lot of thoughts about media and can be heard shrieking about it on the podcast Why Did We Watch This?


← Bleeding for 'The Rebel': A Tribute to the Vietnamese Action Blockbuster | Pelé Built It →