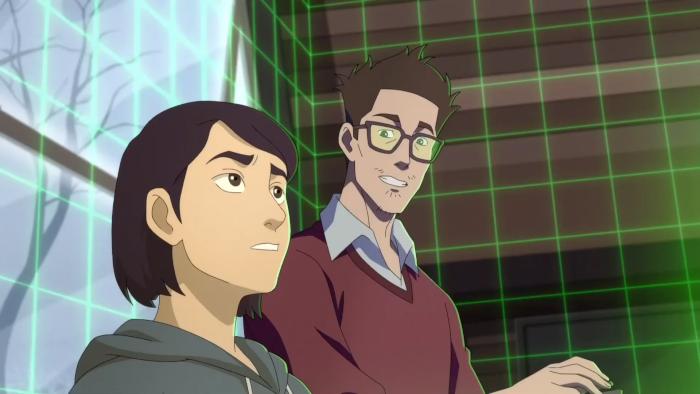 'Pantheon' on AMC+ Isn't Going to be an Easy Watch, and Certainly Not a Happy One

Some spoilers and plot details for the first three episodes below.

For a certain type of viewer, it takes only a few minutes into the latest AMC series, the animated Pantheon, to make a quiet declaration of what type of show it’s going to be. The protagonist, bullied teenager Maddie, closes her laptop and we spot the NERV insignia logo stuck to the back of it. The name of the company that both looks to save the world while simultaneously destroying the people used to do so is from the anime Neon Genesis Evangelion, which, for the longest time, was one of the most brutally existential and nihilistic shows created. It’s a small wink and a nudge to only a small fraction of people tuning in, but it, plus the series being based on Ken Liu’s short stories taken from The Apocalypse Triptych, makes its mission statement clear: this isn’t going to be an easy watch, and certainly not a happy one.

It is, however, wildly engaging from the very first scene. Maddie has been receiving encoded messages from a stranger who is trying to help her face the bullies at her school and exact petty revenge on her behalf. However, it’s soon learned that the stranger is her deceased father, his consciousness having been uploaded to the cloud after an experimental brain scan which had initially been reported as leaving him dead. In and of itself, it’s a premise the series might’ve built itself on, but Pantheon refuses to lean too heavily on just a few characters. Instead, the tension and acute stress are amplified when we, along with the characters, start to realize that he’s hardly the only one and that the means of getting these brain scans have only become increasingly morally bankrupt.

The tone is sturdy and confident as it plays with its science fiction roots while adding elements of horror, fever dream hellscapes, and even interpersonal and familiar drama. While not quite a character study of Maddie, it does a fine job of depicting the anguish and grief she was experiencing over the loss of her dad and the glee at having him back which would have her working against logic. She is the awe and hope of adolescence, while her mother, Ellen, at least at first, experiences abject terror at what this means. Pantheon is extremely haunting in large part due to what they don’t say rather than what’s been explicitly stated.

It poses the question of what it means to be human, as Maddie’s father, David, is functioning through his memories of what a human should be. Later, when we learn what’s happened to visiting scientist Chanda, in a scene as disturbing as any live-action series this year, we realize the lengths to which those in power will go to obtain even more of it. It’s a harrowing look at what happens when people aren’t even used as pawns, but pieces of an algorithm. It’s often brought up that the nefarious force, Logarithm, doesn’t even need a full brain, just the part that was focused on working.

This doesn’t even touch on Caspian, voiced by Paul Dano, a teenage boy who lives with an abusive father, constantly bearing witness to his mom bearing the brunt of verbal ridicule and physical outbursts. The show doesn’t waste time in making the reveal that it’s all an act, but the implication is horrible, as it becomes apparent that his assigned parents are being tasked with trying to elicit a certain reaction from Caspian. What that is, we don’t know yet, though I have my suspicions, especially with how wide-reaching the story is growing.

The big hurdle in selling the series will be for those who don’t watch animation or, rather, only watch one’s such as Bob’s Burgers or The Simpsons, the ones accepted by the cultural zeitgeist to be totally fine to watch as an adult, with the misconception remaining that animation is for kids. Rest assured, Pantheon is very much not for kids, though I argue it’s worth treating animation like any other medium, one that allows for enriching and innovative storytelling. But I digress.

The animation in question clearly saves the budget for the bigger moments or action-packed sequences, but the rest of the show takes on what must be a dated visual aesthetic, from the character designs to the lighting. In some ways it adds to the eeriness of the stories, working with what is, essentially, though it’s the one area that might’ve benefited from a defter, more inventive hand.

In other ways though, it acts like a literal blank slate to build the apocalypse up from minute details, to personal catastrophes. As Maddie says in the very opening moments of the first episode, her classmates were so absorbed in their phones that they didn’t even clock the moment the world began to end. The series, created by Nikita showrunner Craig Silverstein, masterfully builds a sense of dread as things behind the curtain and in front of it accelerate, be it Maddie getting her father back and uploading him without a second thought onto her home computer, Chanda’s nightmarish existence being unveiled, or David being to corrupt an entire class into hating one another through some online hacking.

But really what ties it together is the extraordinary writing that takes what could be dense and dizzying text and makes it both contemplative and engaging, inviting to viewers rather than alienating. Pantheon is in some ways a beguiling meshing of worlds, stripped down in nature through the purposefully plain animation but buoyed by a script and story that is enriched with depth and the color that comes from deep science-fiction. Combining the medium of animation with this heady work of sci-fi and horror makes for a captivating deep dive, one that lingers and haunts after the episode’s end. It’s not for everyone — for others, it will be positively addicting.

Pantheon is streaming on AMC+