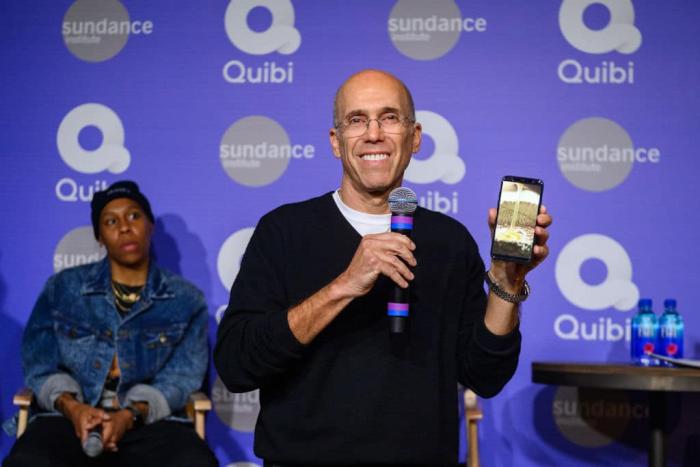 One Month On From Its Launch, How Has Quibi Disappeared From Public Conversation So Quickly?

We all have a lot of time to watch T.V. these days. With many of us choosing to abide by self-distancing measures as the COVID-19 pandemic continues, the comforts of home entertainment have become ever-more necessary. We’ve already seen how audiences have seemingly spontaneously latched onto certain pieces of pop culture, from Tiger King to the latest addition in the Animal Crossing series. Peak T.V. may be a continuing concern in showbiz but I’m not sure even the most cynical among us could have predicted that an entirely new platform, created by a Hollywood legend and funded by billions of dollars’ worth of investment, would manage to essentially sink without a trace a mere month after its launch. Then again, I’m not sure anyone was ever excited for Quibi.

From the get-go, Quibi felt like a Hollywood fever dream. With every new announcement of funding or an optioned series or the addition of astoundingly famous talent to the team, this shiny new platform seemed wholly unreal. The brainchild of former Dreamworks co-founder Jeffrey Katzenberg and Hewlett Packard CEO Meg Whitman, Quibi (short for ‘quick bites’ but not pronounced ‘qui-by’) sold itself as the revolutionary platform of brevity: The best and brightest of film and television making series in short-form, bite-sized episodes no longer than ten minutes each, all intended for a new age of audiences used to online and streaming entertainment as their default mode for viewing choices. That central idea wasn’t a bad one but there was something about Quibi from the very beginning that felt undercooked. The platform launched on April 6, and within its first week, the company was bragging about the 1.7 million downloads their app had accrued in its first week. They were less keen to report that the app also fell out of the top fifty downloads on Apple by its second week of release. As noted by Financial Times, ‘Quibi is less popular than Super Slime Simulator (“just like real slime!”) and BaldBooth, which offers to show you pictures of what you would look like bald.’ They’ve already caved and started making some shows available on YouTube. So far, those viewer numbers aren’t great either.

In her piece for Vox, Emily VanDerWerff wrote that Quibi cannot hope to succeed in a crowded market where there are plenty of platforms and devices doing it all better. Given the supposedly unique hook of Quibi — mobile and tablet-exclusive programming in short bites that works in both portrait and landscape mode of viewing — it seems curious that Katzenberg and Whitman have learned the wrong lessons from their predecessors. For one thing, viewers cannot screenshot or share clips of these series. That’s understandable from a piracy point-of-view but a platform like this desperately needs the buzz of virality to get people interested. The only time I’ve ever seen a clip from Quibi on Twitter came when one enterprising viewer filmed their mobile with another mobile and uploaded the fuzzy video, complete with their own laughter. If nothing else, that’s certainly oddly apt for such a folly.

Quibi programming promised big names and high concepts but few of their offerings seem worth the cost. There’s nothing particularly revolutionary about reality show reboots, remakes of stories from the ’30s, or series that were clearly pitched to other networks first and passed over. For a platform that is intended for younger audiences, I have to wonder to whom Quibi thought they were marketing nostalgia bait like the Singled Out revamp, or Most Dangerous Game, starring Christoph Waltz in full cheque-cashing mode alongside the other Hemsworth. Platforms like Snapchat, TikTok, and YouTube have proven far more successful at reaching their target demographic because they know their audience and what they want. You may not know or care that Snapchat has original programming if you’re over 21 but for those who swear by the platform, the options are varied and worthwhile. TikTok’s welcoming amateur-feel and the seemingly limitless options it offers feel more creative and innovative than anything that Quibi pushes money into. Even YouTube, for all its problems and the hell of that algorithm, succeeds because of the queer quantity of content and the benefit of being years ahead of the competition.

These platforms are also ahead of Quibi in terms of one of its supposedly unique hooks: The ability to watch shows in both portrait and landscape mode. This is meant to be a big deal for the platform but, as many critics have pointed out, few shows take advantage of this format. Many shows in vertical mode cut out important information or are cropped in ways that are aesthetically unappealing. Anything shot in hand-held becomes all the harder to watch in this manner. Many of the shows feel as if they were clearly intended for longer formatting but had to slice things up into those eight to ten-minute chunks to fit the novelty. Why promise the instant gratification of briefness if you still need to watch thirty minutes or so just to get to the fireworks factory? It seems that few of the illustrious directors and showrunners working for Quibi were comfortable working in this format, which makes you wonder why anyone would bother, or at the very least, why Quibi wouldn’t consider working with people who know how to do so. Were they simply not as famous?

The Silicon Valley mentality is one of baffling hubris and the insistence that everything must be ‘innovated.’ It’s not a holiday rental home or sublet; it’s a ground-breaking means to democratize accommodation in the 21st century. Elon Musk keeps trying to reinvent public transport in ways that rob the concept of its convenience and genuine usefulness. Even the mere idea of sustenance has to be reimagined. Quibi feels like the worst indulgences of that mindset, innovation for its own sake with no consideration given to whether people want or need it. The people who are watching lots of content on their phones probably aren’t raring to spend more money per month subscribing to a platform than they would for Hulu or Disney+ that’s still chock full of ads. They’re unlikely to put money down for content that veers between interesting gimmick and utter perplexity.

Quibi has all that money, all that power, and all that hype… and this is what we get? This is it? The supposedly genius combination of Hollywood and Silicon Valley can only get us a second-rate YouTube full of network cast-offs and a wasted gimmick? The sad truth is that few people would care about Quibi if it weren’t for the gargantuan hype surrounding it, which itself is exclusively fuelled by those exorbitant investment funds. Yet all that money can’t get people to care.

← 'Choose a Movie. Keep One Actor, the Rest Are Now Muppets. What's the Movie and Who's the Actor?' | Review: 'Beastie Boys Story' is the Story of a Life →