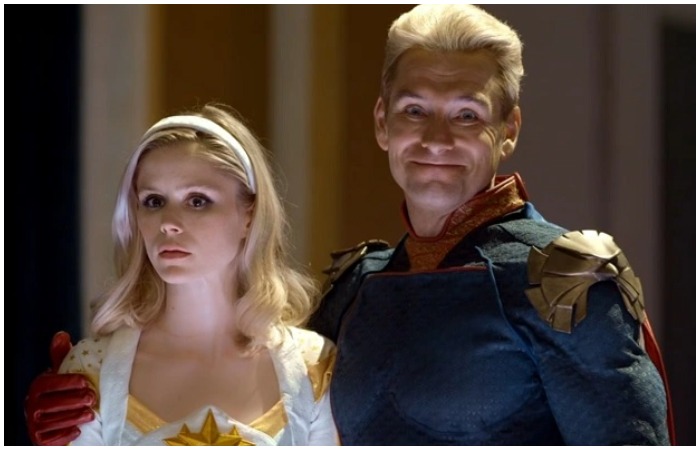 On 'The Boys' Season 3, Starlight Is in Hell

SPOILERS
What a way to start a season.
The newest 3 episodes of The Boys dropped last Friday and they were … Graphic. From death by sounding to exploding corpses and assisted suicide, The Boys’ writers did their best to escalate from last season, and it’s safe to say they succeeded. So what happened??

A lot. We begin with the Dawn of the Seven premiere, and Homelander’s red carpet apology tour as he confesses that Stormfront manipulated him into loving her while hiding her white supremacist goals. It’s nonsense, of course; Homelander’s only problem with Aryan philosophy and eugenics is that he considers everyone, whether Black, white, or super, nothing more than toys. He makes that clear to the remaining 2/5ths of Stormfront during the world’s most awkward handy, breaking the war criminal’s heart. So sad.

It says something about The Boys that a Nazi jacking off the world’s most powerful being is only the second most disturbing sex scene in the season opener. The prize goes to Termite, a cokehead super with natural abilities that mimic Ant-Man’s suit. The remaining Boys — Butcher, Frenchie, and Kimiko — are surveilling the target on behalf of Hughie and his boss, Congresswoman Victoria Neuman. It’s a simple mission that goes terribly wrong when Termite sneezes while sounding his boyfriend - from the inside. It’s as grisly as you imagine and Termite attempts to murder Frenchie in a cover up before Butcher puts him in his place, also known as a cocaine baggie. Butcher even stops himself from smashing the helpless hero flat, making it a year since he killed anyone. It’s remarkable restraint, given how Butcher’s jonesing for that good ol’ murder high. But he’s trying!

Hughie and Starlight are trying too, without much more success. They’re playing house while Hughie works for the committee and Starlight remains on the Seven. She’s there to keep Homelander in line with the blackmail tape of Flight 37, when he and Maeve left hundreds of innocent people to die. Homelander has pledged not to kill everyone in exchange for Maeve’s, Starlight’s, and Hughie’s silence. The uneasy detente is threatened when Stan Edgar, Vought Inc. bigwig, makes Starlight the Seven’s co-captain. She’s polling far better than the Nazi lover, and Stan’s eager to capitalize on that popularity. He even promises to let her have final say on the 2 newest additions to the Seven. One of the contestants happens to be her first love Drummer Boy, now going by Supersonic. Erin Moriarty does a wonderful job emoting Starlight’s hidden terror as Edgar’s aggressive dismissal of him pushes Homelander right to the edge of sanity, and it’s a very understandable fear. He’s on the brink of losing it and releases his tension by psychologically tormenting A-Train. The speedster is back on the team even though every time he goes fast it threatens to take his life, and Homelander is furious about it about his return and poor condition.

Maeve sees how close Homelander is to losing it, and brings Butcher several doses of V24. Vought’s latest wonder drug promises 24 hours of super powers with no side effects except spewing green vomit and possibly dissolving into a pool of acid. She also hints at a weapon powerful enough to take out Homelander, called B.C.L. Red. It’s rumored to have killed Soldier Boy, one of the first American supers who was gifted with physical strength and endurance comparable to Homelander’s own. Maeve doesn’t have all the details but Soldier Boy’s old team, Payback, is still around and might have the details. Particularly his old sidekick, Gunpowder (Sean Patrick Flanery). But to get them, Maeve warns, is going to take more than The Boys’ normal abilities. Butcher gets a taste of exactly what she means when Homelander appears in his apartment, and the two actually bond for a moment over their desire to go “scorched earth” not only on one another but also Vought, and the entire corrupt system that keeps them all in check.

It turns out Butcher might get that chance, because Hughie’s gotten too close to the truth. Victoria Neuman is more than a member of Congress; she’s also Stan Edgar’s adoptive daughter in all but name, and she has the power to make any organic material in her line of sight violently explode. She demonstrates this power on an old friend from her orphan days, Tony, when his big mouth threatens to expose her past. It’s a gruesome scene, with several failed attempts at execution before his body explodes like a beached whale. Hughie watches the whole thing and comes to the sick realization that the woman he admired and thought of as a friend was simply a double agent, controlling the government’s oversight of Vought. And if he slips, she’ll know he knows and then it’s water balloon time.

In his search for information on Payback, Butcher visits Mother’s Milk, who isn’t doing so well either. MM has some anxiety issues and his obsessions with stability and cleanliness aren’t helped by the fact that he and his wife Monique are now divorced. She’s moved on, he hasn’t, and he’s desperately trying to stay away from Butcher’s chaos. However, his issues with Soldier Boy run deep; when MM was a child, Soldier Boy deflected a car into his family home, killing his mother and grandfather and sending his father into a relentless quest for justice that eventually killed him from sheer stress and exhaustion. MM shares his research with Butcher and later rejoins the fold as they search for information on Soldier Boy’s demise.

It’s difficult to come by. Kimiko and Frenchie, who’ve been balancing “normalcy” with missions, track down former Payback member Crimson Countess at a Vought amusement park. It’s like Six Flags, only all the Looney Tune characters are replaced with bobblehead versions of America’s favorite murderers. Kimiko is charmed by the place and envies the freedom and innocence of the children she and her brother were never allowed to be. But as is typical of any Boys operation things go poorly and that innocence is shattered when the Countess makes her violent escape. Things go no better for Butcher on his first attempt at pumping Gunpowder for 40-year-old secrets. Attempted blackmail goes awry, and Butcher flees a parking garage assassination attempt by the expert marksman by the skin of his teeth. A stop-motion animation sent to him by Ryan has him seeing the error of his ways, until Hughie delivers the bad news on Congresswoman Neuman. Butcher is driven to take the v24 and, after getting all the information he can from Gunpowder, beats him into pulp before using laser vision to carve him into pieces. I doubt it’s an accident that his powers most closely resemble those of Homelander and Ryan.

Homelander’s having a bad day too. It’s his “birthday,” i.e. the day Vought claims he fell out of someone’s vagina rather than being grown in a lab. His remaining 40% of a Nazi girlfriend decided to kill herself rather than live in her current state. It drives him to force a previously-suicidal young woman to jump to her death rather than save her life, and leads to the kind of self-absorbed, megalomaniacal rant rarely seen outside a Trump rally, which is of course the point. Needless to say everyone who knows the man is terrified but the public is entranced. His numbers with middle-aged white men skyrocket - obviously - and suddenly he’s The Man again.

That’s bad for Starlight, in a number of ways. She tries to convince Supersonic to turn down his invite to join The Seven by telling him the truth about Homelander’s insanity. It doesn’t work. And despite Stan Edgar’s assurances she can pick the other new member, Homelander seizes the opportunity to bring back the Deep, the ichthyophile sexual predator and former cult member who assaulted Starlight when she first joined the team. It turns out cancel culture doesn’t exist in any universe. Starlight is quite reasonably outraged and threatens Homelander on the Flight 37 blackmail material, only for him to brush off the threat with a cheerful description of his 5-point plan to cripple the United States and wipe New York City, Des Moines, and Maeve’s hometown off the map. He’d rather be loved than feared, but is ready to settle for either. Deep’s may have gotten his true heart’s desire but it doesn’t mean that Homelander won’t psychologically torture him with a gruesome seafood dinner that once again turns the gross-out dial to 11.

Hughie gets Kimiko to break his arm so he can stay out of work for a bit and the Boys pump Grace Mallory for information on Soldier Boy. Turns out she ran the Nicaraguan op back in the 1980s when Soldier Boy was killed. It was Vought’s first modern attempt to get supers into the military, and it went disastrously wrong. Butcher is furious Grace hid this information from him and suffering V24 aftereffects and takes it out on Ryan, in a chilling scene that hints at Homelander’s influence on the boy. Frenchie misses the whole thing because he’s dealing with a crazy drug dealer named Little Nina, only for Butcher to tell him to set up a meeting with her so she can get them to Russia. And in a final surprise twist for Starlight, not only does she have to announce the two white men who will be joining the Seven ahead of more qualified applicants, but Homelander tells the world they’re in love. Starlight is in Hell, and there’s no way out.

I love this show. Everything about it. Even when I have to watch through mostly closed eyes — the Deep and Timothy sharing a last meal, the sounding scene — Kripke and The Boys keep me glued to my seat. The parallels to modern politics have become ever more obvious, perhaps painfully so. Homelander couldn’t be more of a stand-in for a current rightwing demogogue if he were orange and dressed in a poorly-tailored suit. The religious fundamentalists, the Stormfront white supremacist movement, and Vought’s involvement in Iran-Contra blends perfectly with modern Republican politics. That the progressive movement is embodied by a double agent working for the opposition makes Victoria Neuman feel more Kyrsten Sinema than the AOC stand-in she seemed last year. That said, the Boys’ and their government backers inability to effect positive change is certainly appropriate for the current moment, as we fight a losing battle to keep lethal firearms out of the hands of teenagers and abusive men. Hughie lost his last remaining shreds of faith in the justice system when he saw his new BFF commit homicide in a reflection of how many Americans felt watching tragedy after tragedy the last few years, culminating in the complete dereliction of duty by Uvalde ISD police only a few weeks ago. One side advocates for change while the other clings to the physical representation of power as though it gives moral weight to the status quo.

Fortunately, The Boys make it easy to ignore our bleak reality for a while in favor of something more… slapstick. Though I have to say it was difficult watching Jensen Ackles act like a hyper-aggressive, misogynistic Captain America after so many years of solid reliability and compassion as Dean Winchester. I suspect Ackles is having a blast, though, and I’m excited to see what happens next for Soldier Boy. Fortunately, I won’t have to wait long. Episode 4 drops tonight.