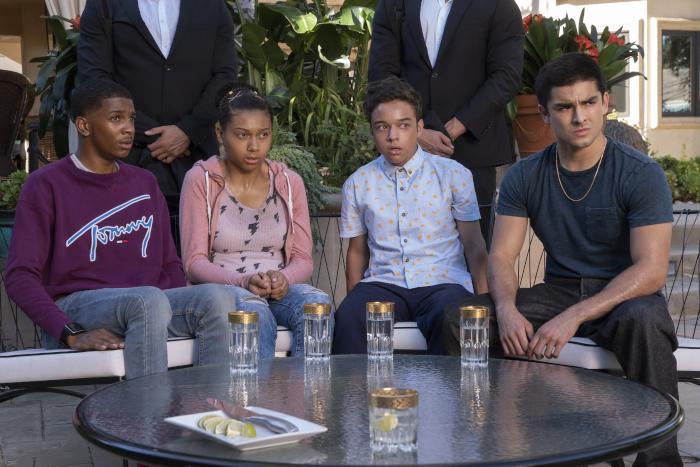 'On My Block' Season 3: We Need to Talk About That Ending Right Now

On My Block Season 3 was fantastic, truly the strongest season of the show so far. In my review, I wrote that the Netflix series is firing on all cylinders, balancing humor with oh so much heart. However, things took a sharp left turn in the last few minutes of the season finale. (By now, I assume you’ve binged the whole season because there are spoilers ahead!) After nearly two seasons of struggling with whether she should go to a boarding school, Monse (Sierra Capri) finally took the chance and left Freeridge behind.

When Monse’s about to head out, Jasmine (Jessica Marie Garcia) gives her a sweet picture of her and the guys, the frame hilariously adorned with Jasmine’s face. (It’s very on brand for Jasmine and I expect nothing less.) Monse vows to keep it on her nightstand where she can always see it. Then, she makes everyone promise to stick together, group chat each other, hang out. Just stay friends, dammit! Cool? Ok, good. The entire exchange is akin to getting all your friends to sign your yearbook in the last days of high school, leaving your number on the page alongside a message to keep in touch.

On paper, it sounds great. Friends should always stay friends, right? And, considering the experiences the Freeridge crew has experienced, it would make sense for them to keep that strong connection. It’s not like they can talk to anyone else about what they’ve gone through. Who would understand? Naturally, Monse telling them to stay friends was the exact opposite of what they did and honestly, that’s where everything went to hell. Monse has long been the one in the group who has worked hard to keep everyone together.

Flash forward two years later (two whole years, WTF?) and the crew has disbanded. Dis-banded. Monse is living a whole new life on the east coast with new friends and that picture? Well, it’s been pushed to the back of her nightstand, forgotten and left to collect dust. It seems time, distance, and the simple act of moving on causes everyone to grow apart. Like most high school friendships, growing apart is par for the course. The longer time passes, the further away all thoughts of said friends vanish, memories of them stored away like boxes in an attic, fading into a foggy cloud of bittersweet nostalgia.

Meanwhile, Oscar (Julio Macias) has made good on his promise and left the gang life behind. He’s living in the suburbs, BBQing, and with a child on the way. It was one of the endings I was here for, honestly. Oscar has gone through a lot and deserves some happiness and it seems like he’s now living his best life. As for everyone else, well, they’re getting by, I suppose. Jamal (Brett Gray) is now on the football team and, when he and Ruby (Jason Genao) see each other in the hallway, they barely acknowledge each other. The only good thing about this scene is that it seems Ruby and Jasmine are still together. That’s it. And Diego Tinoco’s Cesar? Oof, Cesar’s life is probably the most depressing of all. After two seasons spent trying to keep him out of the gang life and away from the violence, he winds up being the leader of the Santos. F*cking hell.

The season was going so well and yet, the teens ended up in situations that were seemingly at odds with who they had grown to be over the last two seasons — at least to some degree. Jamal hates football and fought with his dad about being on the team in Season 1. So, what happened here? He’s hanging out with the rest of the players like it’s normal and it makes me wonder if Jamal partially gave up sleuthing to focus on other things. Regardless, football remains a bizarre choice for his character given everything he’s been through and who he is. It just doesn’t add up.

And, while I’m glad that Monse got out of Freeridge, it was truly devastating to see that beautiful picture of her and her friends shoved all the way to the back. It was especially shocking considering that she was the one to make them promise to remain friends. Yes, friends often drift apart, but damn, that revelation hurt. Cesar becoming the leader of the Santos was perhaps the most shocking of all. Could Cesar have made a different choice and followed Oscar out of that life? Or was he destined to live it due to circumstances? It’s a hard pill to swallow and a reminder that this show, despite its comedic elements, hits hard with the real-life impact.

What’s interesting is how this will all play out in a potential Season 4. After all, these characters will reunite down the line, but the distance between them (for now) might actually allow them time to face their own choices and take responsibility for who they’ve become instead of continuing to play the blame game — something they’ve done for a long time now. The ending was shocking, yes, absolutely.

However, with all that transpired between them over three seasons, they’d largely stopped being friends out of desire and more out of necessity. This was especially true the further down the rabbit hole they ventured regarding the Lil’ Ricky and RollerWorld mystery. Their friendship always came with an extreme dose of mystery or a mission. Knowing that the show could never go on if they’re permanently apart, providing them with some space seems like the next best thing to level up their friendship and, hopefully, bring them back together stronger than ever.

← IFC's 'Brockmire' Is The Most Heartbreaking Comedy On TV | 5 Shows After Dark: 'Top Chef' Season 17 Premiere, 'After Truth: Disinformation and the Cost of Fake News' on HBO →