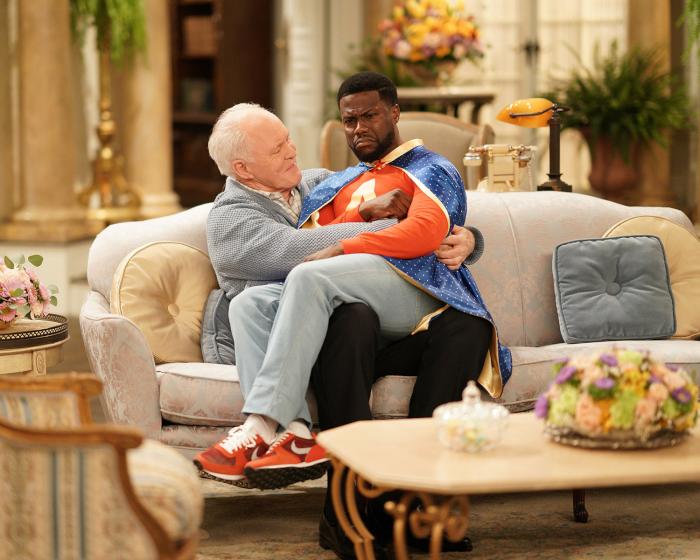 Nostalgia In Front Of A Live Studio Audience: 'Diff'rent Strokes' and 'Facts of Life'

Conceptually, I love the idea behind Live In Front Of A Studio Audience. It’s silly, low-stakes hits of nostalgia that feel comforting at this time of year, after the kind of year(s) we’ve all had. And Norman Lear, at the age of 99, deserves to see his groundbreaking shows celebrated by modern audiences. The execution of previous episodes, Good Times, The Jeffersons, and “All In The Family were uneven. Marissa Tomei? Always awesome. Woody Harrelson as Archie Bunker? Meh. Jamie Foxx and Wanda Sykes? Super fun together! As George and Weezy? Ehhh. Some of it was great; some of it was painful. Forty-some-odd years later and a lot of the dialogue for these shows feels stilted and unnatural. In most cases, the level of talent together with the live audiences creates enough alchemy to make up for it.

Lithgow effortlessly stepped into Conrad Bain’s character as if it were written for him. We swapped one tall, rich, white dude for another. Ann Dowd projected way more Serious Actor vibes than Charlotte Rae originally brought to the character, but she nailed it, right down to the shakiness of her voice. Kathryn Hahn played Jo Polniaczek with so much big, feral energy that she practically leaped off the screen any time she had a line. I thought it was hilarious that she constantly had food in her mouth.

The Facts Of Life episode, “Kids Can Be Cruel,” was centered on Blair and Natalie, so it was mostly Aniston and Tolman’s show. They did a good job. One could argue that Jennifer Aniston IS Blair Warner and you would not be wrong. Back in 1982, when the episode first aired, it was a lot of hammed-up line readings and gesticulation, because that’s what sitcoms were back then. Aniston and Tolman toned it all down to almost believable dialogue levels.

Gabrielle Union’s Tootie had maybe two lines in this entire episode. While she looked great in the wig, I’m disappointed they didn’t put her in roller skates. Yes, by season 3 Tootie wasn’t wearing them anymore. BUT STILL!

They brought in some hambones to play the potential love interests: Will Arnett and Jason Bateman in the world’s worst wigs and preppie costumes. Jon Stewart as the uber-geeky nerd with orthodontic headgear who bids on a date with debutante Blair. Those three took a left turn from the script at one point and there was a second when the camera was panning away from Kathryn and Jennifer as they broke character to laugh at something. Other than that, everyone stayed on script and everyone seemed to be having a good time.

No one has a better time anywhere than Kevin Hart. Boy, was casting him as Arnold a good idea. He basically WAS Gary Coleman throughout the episode. He and Damon Wayans as Willis played off of each other perfectly. In “Willis’ Privacy,” Willis is tired of Arnold always being underfoot and in his business. They employ the classic sitcom strategy of siblings splitting their shared room directly down the middle. In the end, they begrudgingly admit their love for each other and everyone lives happily ever after. 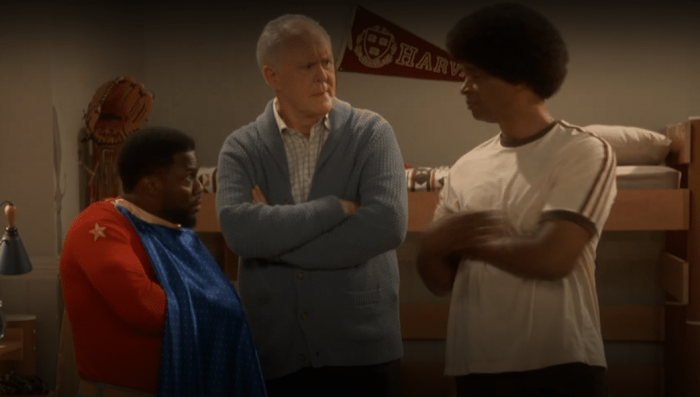 Snoop Dogg’s cameo as Willis’ friend, Vernon was *chef’s kiss.* Snoop embodies that late ’70s/early ’80s inner-city cool so, aside from the afro wig, it was just Snoop being Snoop.

A couple of other really nice touches were bringing in Lisa Whelchel to sing The Facts of Life theme song (she hasn’t aged a day.) Todd Bridges, the surviving member of the original Diff’rent Strokes cast, introduced that episode. Boyz II Men sang a great version of the theme song for Diff’rent Strokes too.

Oh, and Ryan Reynolds’s production company, Maximum Effort, produced a bunch of fake ’80s ads that ran through the show. Here’s a compilation.

Welcome (again) to the 80s. We now return to your previously scheduled programming. #LiveInFrontOfAStudioAudience pic.twitter.com/rbEw1OQnT2

Last night’s Live In Front Of A Studio Audience is available on Hulu!