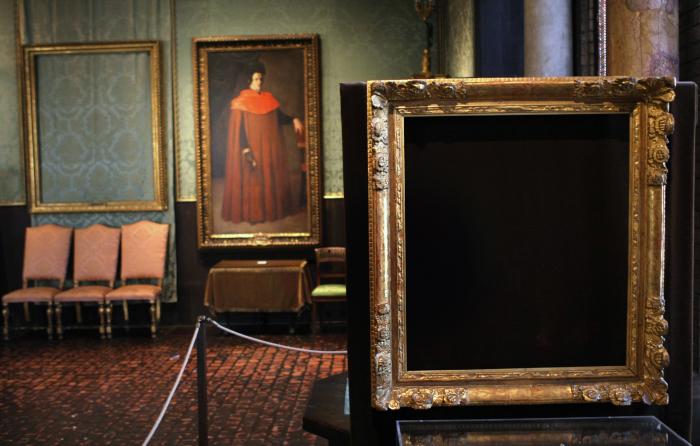 Netflix’s ‘This is a Robbery’ Review: A Scattershot but Intriguing Unsolved Mystery

True crime has been having A Moment for the last decade. While the genre has a lengthy history, it seems as though true crime has positively exploded over the years. Between the countless documentaries and podcasts, it feels as though it’s practically everywhere. I’m not known to partake in this genre since the majority of them revolve around murder, especially those of the more horrific variety. However, I like art very much. I also like heists. So when I found out about Netflix’s newest addition to their ever-growing true crime roster, This is a Robbery: The World’s Biggest Art Heist, my interest was immediately piqued. Despite my love of art and art museums, I’ve somehow gone through life without ever hearing about the Isabella Stewart Gardner Art Museum located in Boston, Massachusetts, or the shocking theft that occurred there thirty-one years ago.

In the early morning hours of March 18th, 1991, two men dressed as Boston police approached the Isabella Stewart Gardner Art Museum claiming to check on a disturbance. One of the two night guards on duty allowed the two men entry despite security policy. The two museum guards were subsequently handcuffed and taken to the basement where they were left duct-taped. The two thieves proceeded to steal thirteen pieces from the museum that night, including Manet’s Chez Tortoni, Vermeer’s The Concert, and Rembrandt’s The Storm on the Sea of Galilee. In total, the monetary value of the works stolen was $200 million in 1991. Taking inflation into account, the value is estimated somewhere above $500 million. To this day, none of the works have been recovered.

This is a Robbery takes its time giving us a tour through history, first telling us who Gardner was and how the museum came to be, as well as an unfortunate breakdown of previously observed security flaws along with the building issues (hearing about the lack of temperature control and a sewage incident was enough to leave my former-archives employee self absolutely horrified). The details of the crime, what’s known about it at least, are discussed in detail. For example, there was a motion detector system that captured the movements of everyone who was inside the museum that night. When a security expert who specializes in museums proceeds to spend a good ten minutes reading most of the printout, it’s surprisingly riveting. However, the documentary series butts against the inescapable fact that what is known of that night is very limited. To this day there are far more questions than answers, which means that the series takes a few unnecessary detours that ultimately go nowhere. The time spent evaluating the Irish mob as possible suspects, with the hypothetical motivation rooted in connections to the IRA, only for it to be completely waved off feels wasteful. The fact that it made it past the editing room was probably justified by the desire to lay out as much of the case as possible, but it ultimately winds up feeling like an effort to pad the runtime instead.

Aside from the exploration of the museum and art, the most interesting thing about This is a Robbery is many of the individuals who find themselves involved somehow or another in the resulting investigation. From the suspects—art thief Myles Connor is quite the character, and I would not be the least bit surprised if there isn’t a flashy Hollywood biopic made about him in the next decade—to the multiple reporters who extensively covered the story, including Boston Globe reporter Shelley Murphy, who quickly shot up my “People I Would Love To Buy a Beer” list. With that said, things get a little ‘yarn wall’ when the series dives into the Boston mob in a desperate attempt to try to follow the possible whereabouts of the missing works.

This documentary comes off as a last-ditch effort to locate the artwork, a sensation that winds up lending the series emotional stakes that is otherwise difficult to find. As the series winds up, it notably informs viewers that the reward for information leading to the recovery of the art works is now an astounding ten million dollars. It’s easy to imagine director Colin Barnicle filming this with the hopes that his work will somehow tip the scales of this fairly stale cold case (understandably so). While I wish this series was tighter and felt less scattershot, learning about the mystery behind the missing Isabella Stewart Gardner Museum works made this bit of crime history a worthwhile watch.

This is a Robbery: The World’s Biggest Art Heist is available to stream on Netflix.

Kaleena Rivera is a tv and film writer. When she isn’t wondering why the hell museum guard Richard Abath opened that side door, she can be found on Twitter here.