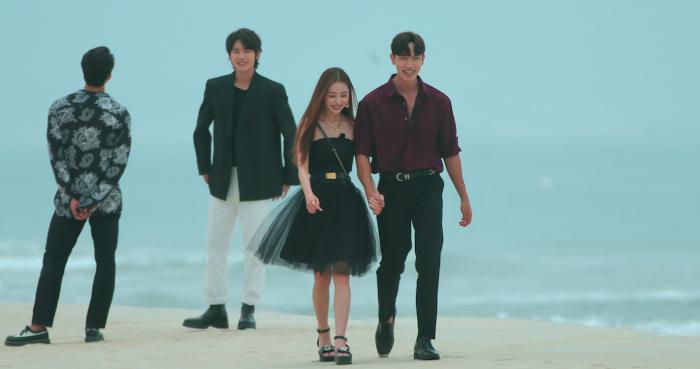 Netflix’s reality series Singles Inferno< had one of the tensest moments in recent reality television history, and I’m angry about it. The series, which recently wrapped its second season, follows twelve single Korean men and women who are searching for love on a deserted island. Devoid of any devices and tasked with spending just over a week in one another’s company, there’s no cash prize awaiting them for “winning.” Instead, they win by coupling up and leaving the island together. There are no engagements or love declarations, just the opportunity to try and make it work away from the cameras.

The show boasts a ludicrously simple concept: Single, conventionally attractive people are placed on an island where they compete for suitors in order to receive luxury nights at a nearby (heavily sponsored) hotel. Deliberately shallow, the first season wasn’t selling love as the pull but the pretty people, host personalities, and extravagance on display when they are flown by helicopter to their paradise night out. It’s there where couples can finally reveal their ages and what they do for a living to whoever they are with, two major facts they are forbidden from disclosing while on the island.

My aforementioned anger stems from the fact that I’ve spent the majority of the past year having to tug my eyes forth from the back of my head as I’ve listened to my two roommates (my husband and my sister) champion and criticize the many personalities on their other favorite reality shows. Note the plural. Aside from sitting through a season (ish) of Below Deck, I was often jettisoned to other rooms as my sister and husband began to shed their human suits to reveal their true snake forms, hissing that Wednesdays are “for the boys” and “don’t you have any writing to do anyway?”

Between multiple seasons of the nonsense reality series The Circle, some trial runs with Love is Blind (an obsession that has brought actual merchandise into our home in the form of gold-painted wine glasses, whose clinkings have me baring my teeth,) and the seemingly endless hours of Love Island, there’s been no shortage of nights where I am shunned so that my husband and sister can cackle and howl at the absurd reality drama.

Aside from Singles Inferno, that is, which has sunk its hook in me.

Season two is still reliably vain but has improved itself due to two very critical points:

— The “cast” lineup is infinitely more likable this time around, with chemistry not just between possible suitors but between the groups as a whole.

There are plenty of other reasons why Singles Inferno might appeal to a broader demographic, from Bachelor fanatics who dig the artificial spectacle to those who enjoy the stress level of Great Pottery Throwdown or Terrace House. The four hosts of the series — Lee Da-hee, Kyuhyun, Hong Jin-kyung, and Hanhae — watch the series along with the audience to provide commentary and highlight certain peculiarities of the contestants, a delightful feature every good reality should look into adopting.

While the luxury hotel stays entice those who fawn over the lavish lifestyle with its infinity pools, rented-out amusement parks, and possibly the most extensive menu in existence, the time on the island is also fruitful for those of us prone to decompressing via dialogue-free cooking vlogs. Whether at the beach or in the hotel, the food is an enormous sell for the viewers.

That said, it’s the cast and the particular challenge in episode eight that elevates the season above its predecessor.

It finds its pull in the dynamic between Choi Jong-woo and Shin Seul-ki — a sweet barista who works with his parents and a pianist whose paths run closer together than we’d first believed. Jong-woo’s determination and the perfectly played out story of his pining for Seul-ki hits its crescendo in the last few episodes, particularly the showdown in the pit as the men on the island are forced to face off to become one of the three contestants who can choose who they want to go with them to paradise. Knowing his greatest adversary was Kim Jin-young, an ex-UDT member who was fighting dirty, the sincere Jong-woo fought - arguably too hard — to secure a second-place win, which would ensure he’d get to pick Seul-ki for his first night off the island.

So much of reality television relies on the familiarity of its DNA — it’s predictable and telegraphed for broader consumption. When done poorly it becomes exaggerated and cartoonish. There’s no need for producers to create something that fools viewers into thinking we’re getting a peek into the real interior lives of people experiencing such separate ones than ours as we all know there’s a performative, scripted aspect to these shows, from American Idol’s early auditions to Below Deck Mediterranean, which clearly profits on an edit that paints main Stewardess Hannah as lazy (god help me for caring this much.)

All of this is to say that it’s rare for a moment of reality television to actually feel, well, real, and of all things Singles Inferno manages it because Jong-woo’s second place isn’t pulled off with bravado, or skill, but just sheer, stubborn, determination and dumb luck as Jin-young’s own enthusiasm bests him. There are nail marks on the guys’ chests and backs, their knees bleeding as they allow one another to breathe as they bake in this silly pit dug for the sake of entertainment. It’s shockingly raw, aided by the reactions of the hosts, who wonder when it will end and ask for an instant replay to determine whose ass hit the sand first.

Jong-woo and Seul-ki get their night to enjoy everything on that ridiculous menu and, having already shared tears together, get to paint the perfect little would-be love story. Single’s Inferno’s greatest magic trick isn’t convincing us that three pairs of contestants fell in love in under two weeks but in creating a narrative where we’re rooting for the inevitability of the impossible. In the end, as Jong-woo stands next to Seul-ki’s other suitors, Jin-young and Shin Dong-woo, he asks, “Would you like to have coffee with me?”

Of the three “couples” who left the island together, Jong-woo and Seul-ki, Choi Seo-eun and Jo Yoong-jae, and Kim Se-jin and Lee So-e, it’s the second that seems most likely to have survived past the cameras based on the magnitude of their chemistry. As we end season two, it’s difficult not to scour the internet hoping that all three have somehow bested the reality show algorithm. Such a lovely, understated story has been woven and we want viable proof that Jong-woo and Seul-ki somehow made it work.

When they made the judges cry to the point where they couldn’t even explain why as they waved off their tears with bewildered amusement, it was yet another testament to the show’s emotional engagement. It’s good writing, the kind that makes you forgive its existence on a show that shouldn’t have a script.