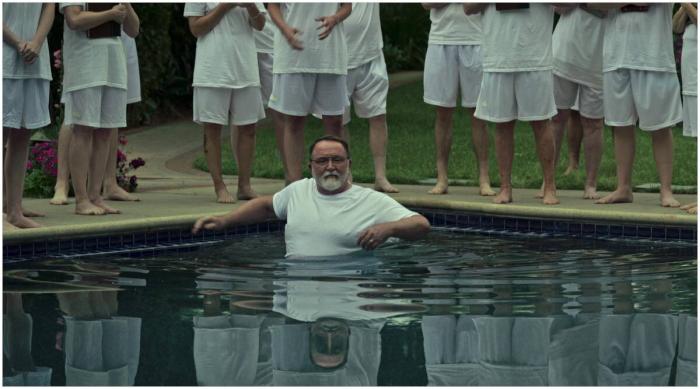 Our Father, the latest in a seemingly endless line of Netflix true crime stories, sets out its stall before the first image hits the screen. A line of text that mentions the recreation of scenes with both victims and actors. This might be seen as a way for director Lucie Jourdan to avoid the aesthetics of a documentary that simply becomes a visually dry series of talking heads, but the more that Our Father unfolds, the more these recreations — along with other formal decisions that surround them — become a method of turning the documentary into something more like a traditional horror film, as if this were the only way to make it fit under the Blumhouse banner.

Even before the narrative begins in earnest, and after this note about recreation, Our Father establishes its visuals through the lens of horror: images of babies on a board on an office wall; quotes from the Bible about having children (that will recur later in the film). They’re designed to create a feeling of dread, of the fact that we’re dealing with a monster. They succeed, and of course, they have to; part of Our Father hinges on the evil of the eponymous father figure — a fertility doctor who inseminated women with his sperm, women who thought that the child they’d raise was their husband’s, only to have that taken away from them.

This is a story that could, theoretically, be told like a horror film. But even considering the different perspectives available — the doctor, or his victims — it’s the latter that feels most compelling, and above all, like they present a story worth telling. The central problem for Our Father is a refusal to get out of its own way and simply allow this story to be told. The idea of finding empathy and telling the stories of victims becomes messily entwined with the formal trapping of horror that the film can’t let go of. In order to propel its narrative and reveal how expansive the acts of Dr. Cline are, Our Father returns to the image of a number going up, to count the number of siblings uncovered as having been fathered by Cline himself. Whenever it hits a new height, the number is punctuated by a low, guttural moan; something that, in the context of a film all about the violation of consent, leaves a bitter taste in the mouth.

There are moments where the idea of this being a horror story, ripped from the headlines, pays off. Liz White, one of the many mothers to Cline’s children, says of her pregnancy, “I thought it was a gift at the time.” This understated moment presents White’s pregnancy — and the shadow that Cline casts over it — as a kind of unwitting Faustian pact: she can have a child, but it will come at a cost that she may never understand. It isn’t just the stripped-back nature of this moment that gives it power, but the fact that it foregrounds the emotions of White and of others like her. The true horror in Our Father is existential: about the moment where life as you know it simply ends, and you somehow need to create something new from the shattered pieces of what came before it. These moments foreground what Our Father ought to be about: the stories of the victims.

There’s a moment of bitter irony when the siblings try to take Cline to court — in the end, sinking their claws into fraud around official paperwork — and a lawyer says to the camera that “what we’re really getting into is the inability of victims to tell their stories,” something that applies to Our Father itself, as much as it does to the events depicted in the film. When the victims are at the forefront, then not only is Our Father a more empathetic film but it succeeds in its strange desire to also be a horror. This shouldn’t be surprising. There’s a reason that a film like Halloween follows Laurie. No matter how morbidly compelling Michael might be in his monstrosity, it’s Laurie who matters, from both an audience identification perspective and a screenwriting one. It’s Laurie who matters, who changes, and who brings humanity to the horror that unfolds around her. The same is true of the siblings and mothers in Our Father, even more so given Jourdan’s desire to lean into horror in the telling of this story.

The question of how best to tell true crime stories is one that will be asked over and over again. The form seems to invite these different perspectives, from the morbid curiosity that seems to inform Joe Berlinger’s Conversations With a Killer shows for Netflix to the surge in fraud stories that seems to have defined TV in the first half of 2022. But these aren’t questions that can be answered simply through formal decisions, or creating a relationship with genre trappings. The question of why to tell these stories, as much as how, seems to be more pressing. Our Father doesn’t seem to know why it wants to tell the story; if it wants to present empathy for victims or create a character study of evil; if it wants to be a documentary or a horror. There are moments where each of these individual strands is effective — the meeting between Cline and some of his children is chilling for how it brings Cline’s darkness into real-world contact with these children living in his shadow — but so often they feel exactly like that: strands, which, if pulled at too tightly, could unravel everything around them.


← Review: 'Hatching' Is A Finnish Fairy Tale Of Most Fowl Play | Netflix's 'Lincoln Lawyer' Is Not Bad →