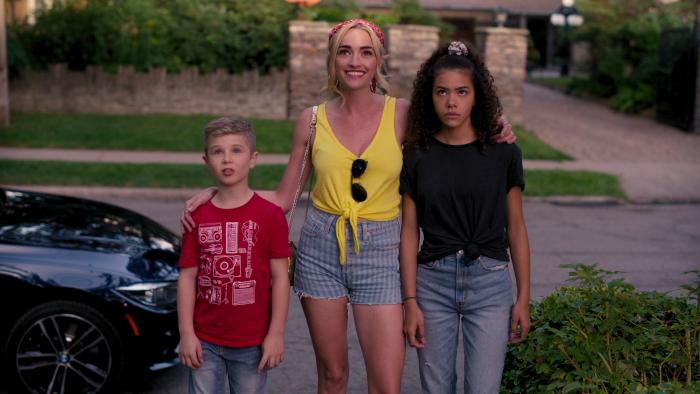 Netflix’s ‘Ginny & Georgia’ Review: What in the Stars Hollow is this Mess?

Like pretty much everyone who’s hit “play” on Ginny & Georgia, I went in expecting a show that was, at the very least, reminiscent of Gilmore Girls. The story of a sassy young mom and a wise-beyond-her-years daughter who are often at odds yet are still best friends all but guaranteed these two shows would be directly compared to one another. The writers anticipated this, opting to get the Gilmore Girls comparison done and out of the way early, with mom Georgia (Brianne Howey) declaring, “We’re like the Gilmore Girls, but with bigger boobs.” Clearly the brand of “edge” that supposedly differentiates this show from its predecessor was imported from the 90s.

For anyone who’s wondering how close these shows can possibly be, the answer is “very.” When Georgia drives her 15-year-old daughter Ginny (Antonia Gentry) and 9-year-old son Austin (Diesel La Torraca) to get a fresh start in the fictional town of Wellsbury, Massachusetts, everyone has to adjust to their new small-town life. Ginny, whose father, Zion (Nathan Mitchell), is Black—he’s the Christopher in this show—now has to cope with being in a predominately white school on top of already having a difficult time making friends due to her mother’s habit of constantly moving from place to place. Ginny is instantly befriended by Maxine (Sara Waisglass), the sort of hyper-quirky best friend who’s supposed to be totally wacky and unique because she loves true crime podcasts, has a blonde stripe in her hair, and loves Halloween. Ginny also finds herself in a love triangle with Maxine’s twin brother Marcus (Felix Mallard), the show’s Jess, aka, the classic bad boy mistake beloved by pretty much every film and tv show that revolves around teenagers.

Meanwhile, Georgia, who’s rather frank about using her good looks as leverage, cozies herself up to Mayor Paul (Scott Porter) who’s considered the Most Eligible Bachelor in town, which is a lie the show insists on feeding us considering that this guy right here fucking exists: 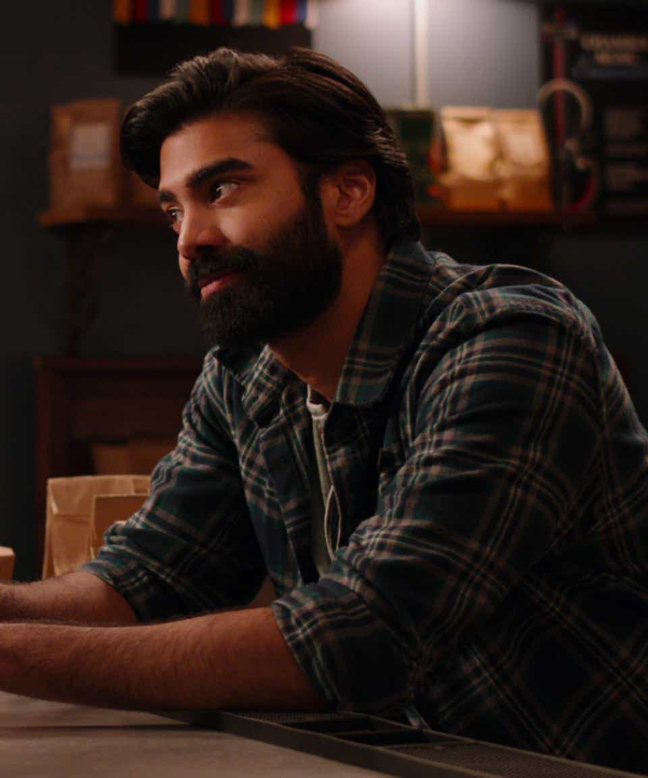 Joe (Raymond Ablack) here is the cantankerous owner of Luke’s Din—I mean, Blue Farm Café, which is apparently the only restaurant in Wellsbury. But instead of Georgia taking liberties and reaching across the counter for a pot of coffee, it’s wine instead. Georgia also manages to befriend Mayor Paul’s assistant, Nick (Dan Beirne), who’s this show’s Michel except he gets to actually be gay, huzzah! as well as her neighbor Ellen (Jennifer Robertson, best known for her role as Jocelyn on Schitt’s Creek), Maxine and Marcus’ mother. As Georgia starts reverting back to her criminal mischief ways, she finds herself having to navigate various obstacles such as the town nuisance, Cynthia (Sabrina Grdevich, acting as the show’s Taylor), along with insidious figures emerging from the past she’s desperately trying to run away from.

As you may be starting to guess, this show is very, very busy. It’s even interesting to watch at times. The eager but hesitant exploration of sex by these teenage girls, acknowledging the personal landmark of a first-time sexual experience while also not attaching their personal value to the act gives it a sense of honesty and vulnerability. Watching Georgia conduct her schemes is also entertaining, even if her ability to continuously evade legal consequences strains credulity. However, it all starts to get a bit much when paired with her “I’m not a regular mom, I’m a cool mom” bit that goes way too damn far (lady, why is your 9-year-old alone all the time?). Ultimately the show’s raw edges become exposed in the writing. It’s really noticeable during the voiceovers, when there’s many terrible attempts at recycling pearls of wisdom, like, “Life is a battle and beauty is a goddamn machine gun,” and “Clear eyes, open hearts, dumb fools.” The dialogue isn’t much better at times (more on that later), often pulling me right out of the show whenever one of its Gen Z characters would make an Elderly Millennial reference. Hearing an allusion to 2000s-era American Idol judge Randy Jackson’s catchphrase “That’s gonna be a no from me, dawg” made me feel like I had time-traveled.

One of the most cringe-inducing ways Ginny & Georgia manages to trip over its own feet is when it comes to the subject of race. A lot of the problems stem from portraying racism from the white gaze. It’s not surprising that Ginny, as a biracial girl in a predominately white town, would be subjected to a slew of microaggressions (with some not being the least bit “micro”). But without any sort of examination or significance to the story, it seems to only exist to cause harm for the Black character, rendering their psychological suffering as little more than collateral damage for the sake of saying “racism is bad, m’kay?” There are a few solid moments that happen, specifically when Ginny retaliates against her racist English teacher, as it ties into her evolving relationship with her mother, and when she makes the bad decision of allowing a white woman to run a brush through her hair (a truly scream-worthy moment) in an effort to fit in with her friends.

When all of this gets really frustrating, however, is when the show tries to demonstrate her struggle not in conjunction with but at the expense of the few other Black students in Wellsbury. While Ginny’s reflections on her biracial identity is an experience that some people share, the sentiment, “I don’t fit in with the white kids, don’t fit in with the Black kids” feels disingenuous when one of the Black students, Bracia (Tameka Griffiths), makes a blatant attempt to befriend Ginny, only to be completely rebuffed by her. Being neither biracial nor Black, I won’t pretend to speak with any sort of authority on what that lived experience consists of, but as a critic, I feel confident in saying that Ginny’s out-of-hand rejection of the Black students feels less like an exploration of a biracial girl’s insecurity than it does an unwillingness to give significant airtime to Black characters.

The show’s rock bottom has to be the fight between Ginny and her boyfriend Hunter (Mason Temple). The clip is already making the rounds on social media, which isn’t terribly surprising as it’s horrifying in its ham-fistedness. The fight originates from how racism can be experienced differently by Black and Asian people (Hunter is half-Taiwanese). This is a deeply complicated subject that deserves nuance and a skilled hand to make it a point of discussion. What we get instead is what Hunter angrily terms the “Oppression Olympics,” with the two lobbing race-based stereotypes at one another. She mocks his inability to speak Mandarin and he mocks her attempts to twerk (wtf) and how he’s never seen her “pound back jerk chicken” (WTF x infinity). It is a MESS of a scene and although some are coming to its defense by citing the fact that both of the actors in the scene contributed to the script that was also developed by two Black writers, it clearly did nothing to clear the bar of failure. There is really only one insightful moment when it comes to the matter of race, and that’s when Bracia talks about colorism and that, despite their shared struggle with racism, Ginny is able to move through the world differently than she, a darker-skinned Black woman, can. For a show hellbent on wading into racial issues, I dearly wish more of those moments were handled with that kind of honesty and care.

Overall, the show is simply exhausting. There is not a single life problem that isn’t superficially used to inject drama: self-harm, body dysmorphia, eating disorders, murder, drugs. It’s Euphoria if you took all the bite and cohesion out of it. In fact, the biggest problem with Ginny & Georgia (second to its clumsy handling of race) is that it wants to be every show. Because along with the obvious Gilmore Girls fast-talking whimsy, it’s also clearly desperate for the thoughtful cross-section of race and class that’s presented in Little Fires Everywhere, while also possessing the tonal camp of shows like Desperate Housewives. Between its identity crisis and the fact that the show, at ten episodes with a run-time of fifty-ish minutes each, feels overly long, getting through the season felt like a dramatic chore.

There are things that work here but they’re given so little screen time that it hardly matters in the grand scheme of things, though I’m willing to go on record to say I wish like hell this show was about Bracia and her friends, with a heaping side of Nick and Ellen. This matters little though as Ginny & Georgia is almost surely destined to have a second season. It’s a messy drama, which is a pretty reliable source when it comes to garnering views. Whether it’s worthy of garnering praise, however, is a whole other story.

Ginny & Georgia is available to stream on Netflix.

Kaleena Rivera writes about tv and film. When she’s not wondering if white Gen Z kids even know what the Cupid Shuffle is, she can be found on Twitter.