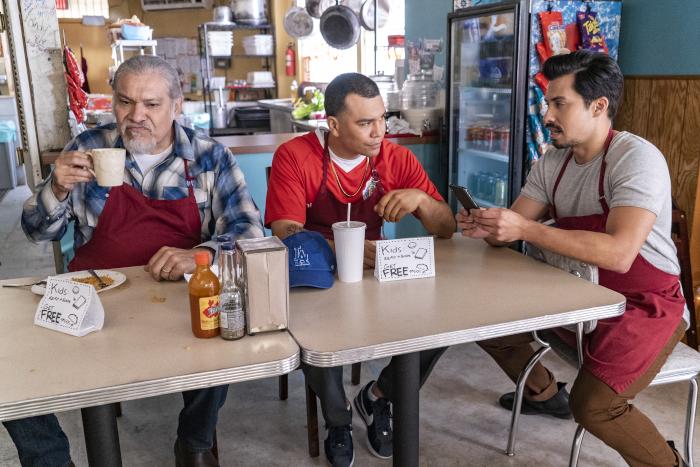 The opening scene of Gentefied sees a young Latinx man riding towards an elderly woman. He stops, reaches into his jacket and… pulls out a couple of books. The scene is brief and this man isn’t a major character. However, in one simple exchange, Gentefied manages to subvert a harmful stereotype that, in most other TV series where Latinx characters are portrayed, would’ve shown him to be exchanging drugs. Probably.

In fact, the Netflix series works a lot toward undoing stereotypes, all while building a story that centers the Latinx community and the effects of gentrification, a topic that is often referenced but rarely explored on television. Created by Marvin Lemus and Linda Yvette Chávez, and executive produced by America Ferrera (who also directs several episodes), Gentefied delves into the impact these changes have on Boyle Heights, a Los Angeles neighborhood, when improvements and changes threaten to push them out of their own homes and close their businesses.

The story follows the Morales family, headed by grandfather Casimiro, aka Pop (Joaquín Cosio), as they struggle to make ends meet. Mama Fina, the family restaurant, is going under, and Erik (Joseph Julian Soria) is trying to do the best that he can while feeling second best to Chris (Carlos Santos), his wealthier, culinary-school hopeful cousin who is far more gung-ho about change. 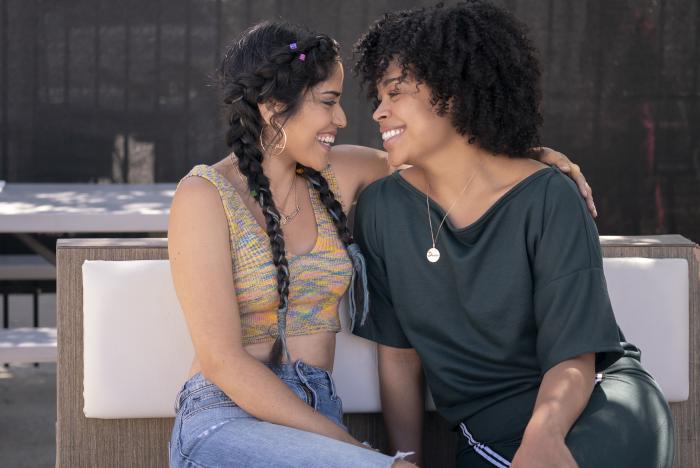 The series explores impossible scenarios that aren’t so cut and dry, toeing the line between the benefits gentrification seems to bring on the surface and the big-picture repercussions it has on everyone over time. The biggest example of how the series sets up these conflicts is through Ana (Karrie Martin), a struggling artist who is finally paid the big bucks she deserves to do what she loves. However, her employer, Tim (T.J. Thyne), is a white man who’s buying up real estate and instilling his financial dominance over local store owners.

Ana’s continued work with him is a major point of contention between her and girlfriend Yessica (Julissa Calderon), who wants to support Ana’s work, but is also wholeheartedly against what Tim stands for. Ana is faced with the challenge of carrying on with her work despite knowing the cost or figuring out a way to achieve career success without being a direct benefactor of gentrification. It’s a tough personal call for Ana and, perhaps most interestingly, Gentefied doesn’t have a straight answer, though it lays out the issues concisely.

A large part of the season is spent on coming to terms with change. If the inevitable is going to happen and the neighborhood is being uprooted, should Mama Fina’s stop fighting so hard and go with it? Should the Morales family ensure their survival at the cost of their beloved neighborhood? What happens if they don’t embrace the change at all and fight back? How can they be financially successful without harming the community? They’re all valid questions and the series delves into every scenario, deftly handling all of the answers with ingenuity, thoughtfulness, and an abundance of humor and charm.

Gentefied continues breaking boundaries by gently upending harmful stereotypes of toxic masculinity as well. The series touches upon the age-old question of what it means to be a “man,” all without coming to conclusions that send us back decades. This is central to Erik’s storyline, especially as he comes to terms with wanting to do right by on and off girlfriend Lidia (Annie Gonzalez) and their unborn child. Erik has a lot of pride, but he’s also not so stubborn that he isn’t unwilling to listen, to ease up on his own needs and insecurities in an effort to be there for his family in a healthy way. He doesn’t push Lidia to do things she isn’t comfortable with, even if it means he has to forego on the traditional life that he wants. It’s never “my way or the highway” and the series is stronger when Erik is able to push through with thoughtfulness and emotional strength.

Gentefied also tackles the themes of dual identity and what it is to be Mexican-American in the U.S. It touches upon the perception of identity from a variety of perspectives. No one struggles with this more than Chris, who doesn’t speak enough Spanish and is too out of touch with his community to be thought of as Mexican. However, he’s also too Mexican to be considered an American by his racist boss, who seems to have walked straight off the set of Hell’s Kitchen. He can’t win no matter what he does and it’s the dichotomy of being a part of two cultures while never completely fitting in with either that’s so relatable. The series smartly explores this storyline, at least for a few episodes, though it halts going much further than that after Chris finally stands up to his boss.

The issues facing the community work as an undercurrent throughout the season, touching all of the characters’ lives in distinct ways. The series expertly crafts storylines without minimizing the heart and humor of individuals and situations. Rather, they’re intricately connected, leading to one hell of a cliffhanger that is poignant and incredibly heartbreaking in its realism.