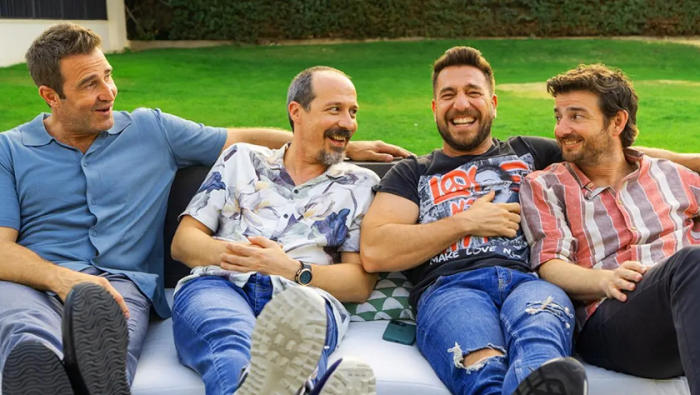 You Probably Don't Want to Watch a Show Called 'Alpha Males', But You Should

Everything I’m about to say about this show will probably make you not want to watch it.

It’s called Alpha Males (or Machos Alfa in its original Spanish), and it follows four cis, straight, white, middle-aged male friends, who find themselves adrift in a world experiencing—in the show’s own words—‘the death throes of patriarchy’. Unmoored from the certainties of the models of masculinity they grew up with, they now struggle to adjust to the new reality of empowered women, updated terminology, and strange new visions of what being a man might mean.

I can hear the retorts already. ‘Who asked for yet another show about men struggling with being men?’ ‘Do we really need another story centered on the perspectives of people who don’t know how to react to suddenly not having all the power in the world?’

It’s perfectly valid that some people might be instantly turned off by the idea, but get over that hurdle and you will find in Alpha Males a sensitive and funny ten-episode series that shines a light on how the patriarchy—and the various manifestations of toxic masculinity that it leads to—damages those it ostensibly favors as well as those it traditionally subjugates. Coming as it does from a country that has its own particular flavor of cultural machismo, it is extra worthwhile.

Directed by Laura Caballero and created by Caballero and her brother Alberto, alongside Daniel Deorador (all three of whom worked on iconic Spanish sitcom Aquí no hay quien viva), Alpha Males stars Gorka Otxoa as Santi, Fernando Gil as Pedro, Raúl Tejón as Raúl, and Fele Martínez as Luis—the four middle-aged friends at the story’s center, each undergoing their own crisis which leads them to reassessing their relationship with the world. Santi has been through a harsh divorce and is trying to navigate the world of online dating with the help of his teenage daughter. Pedro, a high-flying TV executive, is facing a crisis of confidence brought on by his redundancy as well as the appointment of a female replacement at work—not to mention his partner’s sudden success as an influencer. Raúl’s long-term partner, a very successful divorce lawyer, wants to try an open relationship—a fact that shakes Raúl’s world to the core, which some might consider ironic considering the fact that he has been carrying on an affair behind his partner’s back for a few years. Meanwhile, low-ranking police officer Luis has to contend with the responsibilities of having two children and the strain those have brought to his marriage.

A particularly refreshing thing about Alpha Males is that it does not neglect the women in the story. They feel as fleshed out here as do the men, and their needs and desires—as well as their relationships with the structures of modern Spanish society—are an integral part of the narrative. The key is that nobody is perfect here, regardless of gender, and everyone is doing what they can to navigate the complex and oppressive world of modern capitalist patriarchy. Though all of the leading players in Alpha Males are written and performed well, with strong characterization and believable development evident throughout, more than anything else it’s their relationship with the system as a whole that lingers after the show ends. ‘Traditional’ masculinity is experiencing death convulsions, and that’s leading to some spectacularly damaging phenomena as well as powerful rays of hope. The show makes sure to depict both, and it does this without lapsing into drama-killing proselytizing or self-satisfied posturing. There are not really any revolutionary or new insights here, but there don’t need to be. Occasionally, the plot or character development lurches forward in ways that threaten to take you out of the experience, but overall Alpha Males remains a funny, brisk, and relatable story with a human heart, and a solid 7 or 8 out of 10 deserving of attention.