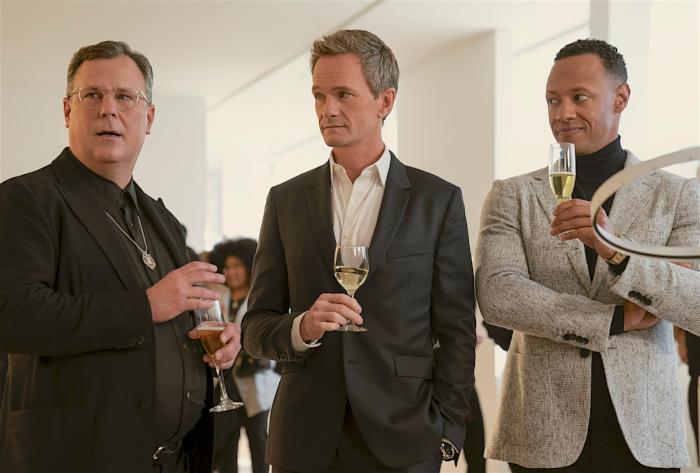 Very few things about How I Met Your Mother have aged well, particularly Neil Patrick Harris’s sex and status-obsessed Barney Stinson. Any saving grace the character is allowed in retrospect is due to the heart that Harris imbued him with and the fact that he was, frankly, very funny in the role, a livewire energy with just the right amount of charm to make the level of sleaze watchable. Since the end of that series, Harris has bounced around genres, with notable roles in A Series of Unfortunate Events, last year’s miniseries It’s A Sin, and Matrix: Resurrections. The latest, the relationship comedy Uncoupled for Netflix, is the closest he’s come to his How I Met Your Mother role and not because of the format but because of how unlikable the character is. This time, however, the charm is lacking.

Harris plays Michael, a hot-shot New York City real estate agent whose life is thrown off course after his partner, Colin (Tuc Watkins), announces his plan to leave him. Blindsided by the end of a 17-year-relationship (a number with a heavy significance it seems as it’s repeated a comical amount throughout just the premiere), the series follows him as he both tries to grapple with why and how what he thought was a solid relationship ended while he also explores the dating scene as a gay, 40-something-year-old man in Manhattan.

In and of itself, this is a fine synopsis. Developed by Sex and the City and Emily in Paris creator Daren Star and Jeffrey Richman, for all its talk of modernity and the plights of dating in the digital era, very little feels new in Uncoupled. Each character comes across as shallow and one note, and any revelation a character experiences, especially Michael, comes at the cost of episodes of miscommunication or the fatal flaw of television and film where one character doesn’t give another a moment to speak to clarify themselves, which would ultimately avoid any problems in the first place.

The atmosphere is stilted and insincere. There’s the sense that the script believes it’s being current and clever but it all plays as years out of date, from the reaction to using online dating apps for the first time (sure maybe you haven’t used them in the year 2022, but my god, you know what they’re about) and casual hookups to using millennial and snowflake as insults. Characters who aren’t in the immediate orbit, already thinly drawn, are stereotypes who hardly serve a purpose, from an Italian man on business to a would-be, younger nemesis. Even the friends are given their archetypes to hang their characterizations on.

Brooks Ashmanskas, Tisha Campbell, and Emerson Brooks are all serviceable as Michael’s three closest friends, but even they, with all of the scenes they’re in, don’t make much of a dent as we never truly see them from their worldview. There’s the running idea of Michael and his emotions being the dominant force in any and all conversations and it’s one that, unfortunately, isn’t leveled out in the script.

Marcia Gay Harden is Claire, a wealthy client of Michael’s, who shares a history of being left by her spouse, is drawn in big, bold, and hollow lines, forced to endure some of the broadest, unfunniest moments of the show. She’s an addition meant to parallel Michael’s experience. Had she been written with greater nuance or charm it might’ve worked. Instead, by keeping her cool and aloof, it holds her at a distance, making it so that she never amounts to more than a character written for the screen.

The worst offender, however, is Harris himself. He’s given the most to do, has the most screen time, and shares multiple different dynamics with other actors on the show, and still, his Michael is a charisma vacuum. There’s a smugness to the performance and it makes an already frustrating and selfish character all the more unlikable. While the show does try to reconcile with Michael’s faults, it never does so with enough gusto to fully endorse the idea that their protagonist isn’t the easy good guy despite being dumped. There needed to be a greater commitment to his character’s need for growth and challenges in the process.

Add to that spiritless direction, a personal general apathy for stories about affluent white guys in New York who are “struggling” in their million-dollar homes and who talk of their Tiffany-framed photograph and Williams-Sonoma bowls, and there’s little in Uncoupled worth recommending. I also remember the series had to drop a Latina housekeeper character due to complaints about the careless and stereotypical depiction of the character made by Mexican American actress Ada Maris, so it’s also a series out of touch with the times.

It’s a nothing show, another cog in the Netflix algorithm and without even a character to get invested in that keeps you watching past the point of it being rewarding. There’s no selling point to Uncoupled.