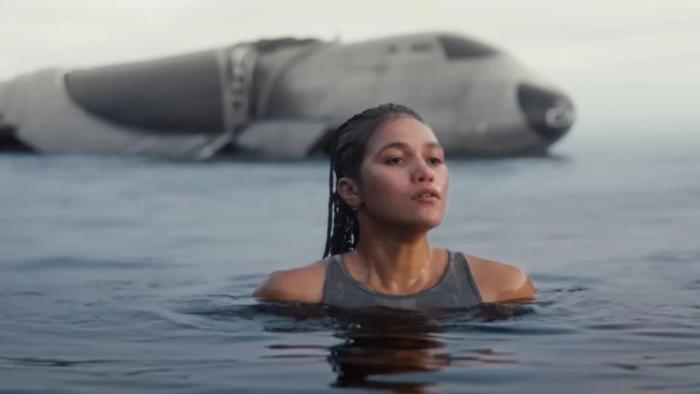 'Moonhaven' Is the Top-Notch Sci-Fi You've Been Sleeping On

AMC+ has an early gem in Moonhaven, a sci-fi series premised around a dying planet Earth and a Moon colony, Moonhaven, designed to develop both a technology and a society to save it—but a colony safe from the brutality and poisons of Earth. Three generations in, the colony is composed of utopians who have been raised to think of nothing but bringing their perfection to the suffering “Mother Earth.”

Earth is a polluted Blade-Runner urban hellscape, clearly devouring itself, with a populace of gas-masked inhabitants waiting for the slow, eventual salvation of future generations through AI. That autonomous, self-learning AI, called IO, designed and effectively rules the moon colony. Although there is human leadership, IO decides when the leadership comes and goes, as the intellectual property of a group called ICON.

“IO is fluent in the history of our mistakes,” says Indira Mare (Amara Karan), the human envoy of the AI. Those mistakes define humanity’s future. But IO learns by observing the Mooners, what Indira calls the best of humanity: People who have never experienced “true evil,” true corruption, and greed.

Moonhaven itself is a finely imagined and realized science fiction setting: it is a forested, bucolic expanse, a kinetic and bohemian Eden with a plethora of art and very-unspace-like wooden architecture. The show’s lead Moon character is Paul Sarno (Dominic Monaghan), a detective in a world where police are largely preoccupied with helping the relatives of victims heal emotionally from trauma. Together he and his partner Arlo (Kadeem Hardison)—- a cheerful dreamer — investigate the first murder in a long time in the moon’s history, a murder linked to an Earther pilot and combat veteran named Bella Sway (Emma McDonald), who is incidentally headed to the moon with Indira Mare herself as the Envoy’s pilot.

Bella is the show’s central protagonist, and she’s a fascinating and charming character—the kind of spunky, gives-no-shits kind of strong female protagonist it’s very easy to mess up, especially by trying too hard to make her both bitchy and lovable. She’s one of those capable, secretive, intuitive POV characters that works well both as lens and a distinct personality.

Slowly, the show builds and builds the stakes and complexity of the Moon and Earth’s relationship, one an increasingly reluctant savior and one reluctant to be saved. Change is a pressurized impossibility at every turn. Darker and darker twists emerge.

The setting is as fascinating as the story. The differences of language and cultural nuances in Moonhaven are precise and pervasive. It’s incredible worldbuilding, with the setting’s complexities and imperfections on display. There are design choices that feel novel but intuitive. Each small device and technology has been carefully imagined in a way that it’s very difficult not to admire. From costume design to interior decorating to music players to instruments, from social concepts to linguistics, Moonhaven is a true sci-fi vision.

Not to overstate things by invoking the great Le Guin, but the closest thing I could compare the rendered cultural difference to is the opening conversation in The Left Hand of Darkness, when the Earth-born representative of a galactic collective speaks with an official of a planet reluctant to join. The representative slowly begins to realize that even after years of study, he does not understand the person he is speaking with. A divide of logic and purpose as well as lightyears stand between them. The realization sets up the book’s mode of acceptance and possibility: different modes of being are at play simultaneously, and the audience has to be ready to recognize and expand with new perspectives.

Moonhaven accomplishes the best of science fiction without the weight of pretentiousness or self-importance. It’s honestly a treat. Some critical responses have been dismissive, but there’s always some innate silliness to sci-fi that makes it tempting to be cynical of the show’s high-concept aims. So yeah, it won’t be for everybody. But give it a shot.

The first season is now streaming on AMC+, with the first episode free with an Amazon Prime subscription.