'Monsters at Work' Tries to Recapture the Magic, with Limited Success

Monsters, Inc. was the first Pixar movie to really capture my attention. A Bug’s Life was cute but little more. The Toy Story movies, I’m afraid to say, left me cold. But Pete Docter’s Monsters, Inc. grabbed me by the heartstrings and never let go. I was 22 years old and a decade from wanting kids of my own, but watching Sully interact with Boo was the first time I thought there might be something to it. John Goodman and Billy Crystal played off one another perfectly. Steve Buscemi, Jennifer Tilly, and James Coburn (who passed away only weeks after Monsters Inc.’s premiere) played their parts with gusto. Nineteen years later the CGI is still gorgeous, particularly when it comes to Sully’s hair and the door storage action scenes. Nineteen years later there are still tears in my eyes every time Boo and Sully say goodbye. It’s a perfect movie. Monsters University tried hard to bring back the spark, but it wasn’t the same. Lacking the dynamic between Boo and Sully, the sequel relies on quips and a somewhat more mature storyline. It’s good, but it’s not great.

This brings us to Monsters at Work, Disney+’s television spin-off of the Pixar franchise. The series premiere begins immediately after Waternoose’s arrest, as Mike (still Billy Crystal) and Sully (still John Goodman) are placed in charge of Monsters, Inc. by government stooge Roz. Sully gets to be CEO, and Wazowski becomes Senior Co-President of Monsters, Inc. and Chief Executive Vice-Deputy Administrative Director of Comedy Resources Management, or SCPOMICE-VDADOCREM for short. It rolls right off the tongue. Things aren’t going well. The rolling blackouts continue as the utility company struggles to supply enough energy to keep the city going. Everything relies on their service, and their generators aren’t up to the task. They may as well live in Texas. 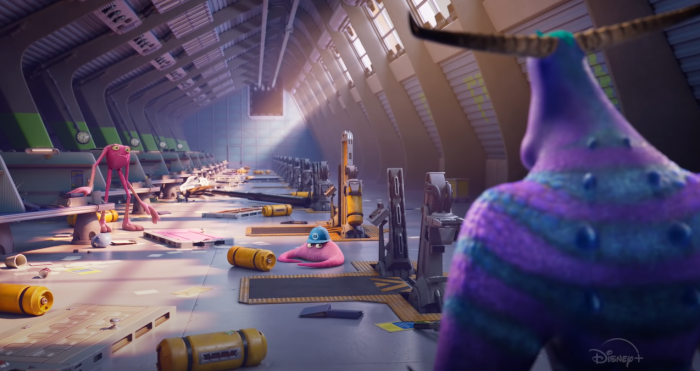 Into this hot mess walks Tylor Tuskmon, the top student in his university class and a recent graduate. He’s already been hired as a Scarer and comes in expecting to be an important part of the team right away. But Scarers are going the way of coal plant technicians and are to be replaced with Jokesters, not a natural strength for a monster who looks like the Minotaur had a baby with a purple cobra. Without children in need of scaring, Tylor gets put in MIFT, the Monsters Inc. Facilities Team. They keep the lights on and the toilets flushing. Like every Facilities department ever, they’re relegated to the basement, exposed ductwork, and pipes everywhere. There aren’t enough desks and everything is old. There’s Val (Mindy Kaling) as Tylor’s old classmate he barely remembers. She dropped out early and Tylor isn’t thrilled to find his college degree got him to the exact same place. Fritz (Henry Winkler) is the overenthusiastic department supervisor who’s all about THE TEAM. Cutter’s (Alanna Ubach) the tech who gets things done, Banana Bread (Dee Bradley Baker) talks only in fart noises no one in the department understands, but he brings in banana bread every day so he’s cool. And there’s Duncan (Lucas Neff, Mr. Jimmy Chance from Raising Hope) the assistant supervisor from Hell. He’s nitpicky, belligerent, and overprotective of his tiny little fiefdom. He’s determined to get Fritz’s job and has no interest in a college-educated hotshot stealing his thunder. I worked for a Duncan for over a decade and it damn near killed me, but I suspect his abusive managerial skills will be played here for laughs. And are there laughs?

…Kind of? That’s the best I can say. Each episode is barely 21 minutes long with another 5 minutes of credits, time that could be better spent on character development or plot structure, or basically anything. It isn’t terrible, and there’s a kernel of something there. Billy Crystal is still a pitch-perfect Mike Wazowski. John Goodman’s voice is thinner with age, to the point where it hurt a bit to hear. But he’s still Sully, goodhearted with little to do so far apart from giving a motivational speech. But Pixar’s trying to make a workplace comedy that appeals to both small children and their parents and so far they’ve missed the mark. Jokes about how much student debt Tylor accrued just to get where Val already is are timely but flat, and incomprehensible to the kids. I found Banana Bread’s constant raspberries funny for precisely 3 seconds, and I’ve got the emotional maturity of a ferret. Tylor’s fish-out-of-water story might be interesting if it were written for adults. Something could also be made of this boy, first in his family to graduate from college, relegated to a group of blue-collar technicians. If they’re trying to make the point that large enterprises rely on the hard work of the overlooked and underpaid, great. When the otherwise cult-like MIFT springs into action, they demonstrate why the company holds them in high respect. But so far the closest we’ve got to action is a malfunctioning door and a stuck nut. The animation is so-so; honestly, Sully’s hair in the original movie still moves better. 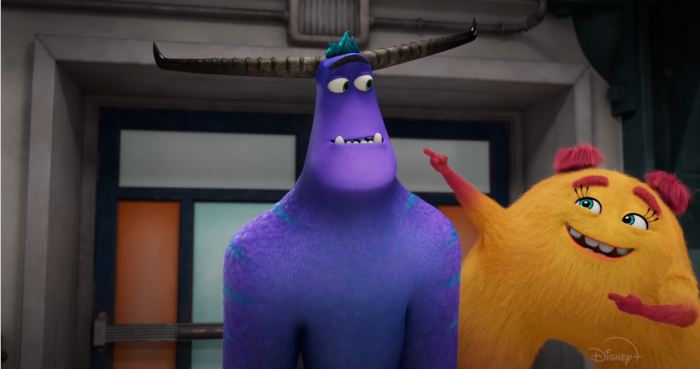 We’re only 2 episodes in. Hopefully, characters get fleshed out and something happens. As it stands I won’t even bother showing it to my kids. It’s great to see Mike, Sully, and Cecilia again, but the nostalgia isn’t worth it. Monsters, Inc. was something special. Monsters at Work may look like its inspiration, but it sure doesn’t feel like it.

← Marvel's Multiverse Gets Animated with What If...? | How Long Can the Newsletter Boom Last Before the Bubble Bursts? →