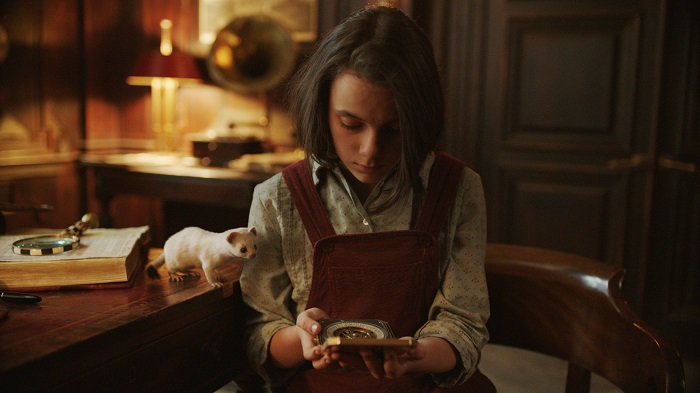 On ‘His Dark Materials,’ Lyra is Taken in by the Gyptians, Reads the Golden Compass, and Learns About Her Parents in ‘The Spies’

“You’re a remarkable girl, Lyra Belacqua,” Ma Costa says to her onetime charge in “The Spies,” the third episode of “His Dark Materials,” which once again burns through plot at an impressive rate. Lyra’s mother is revealed, and duh, it’s Mrs. Coulter! We learn that in what seems to be our world, Lord Boreal is tracking the same Stanislaus Grumman that Lord Asriel described as dead to the scholars at Jordan College! The Gyptians, united, move onward to the North, to finding the Gobblers and freeing their kidnapped children! And Lyra, who we’ve been told over and over again is special, shows herself to be so with her reading and understanding of the alethiometer, or golden compass! All it took was a few minutes puzzling over the device until she can frame a question in her mind and then retrieve the answer. Good for you, girl! 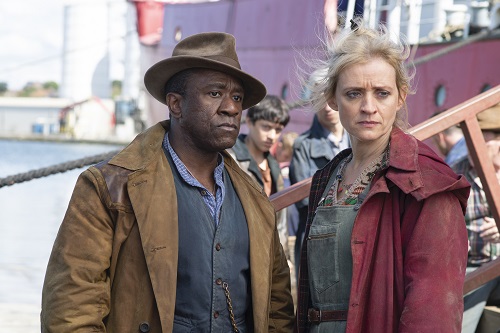 I will praise “The Spies” for this, actually: It continues to build out this world in what I thought was a very intentional way, and it was the first episode of His Dark Materials that I think did this really well. When I talk to people who haven’t read Philip Pullman’s books, they have tons of questions about the mechanics of the daemons, about who the Gyptians are, and about the motivations of the Magisterium, and I think a lot of those queries were answered during this third hour of the series. For the most part, the show resorts to using Lyra’s reactive personality as our entry into this world—think Ellen Page’s character in Inception, who basically operated as a vehicle for Leonardo DiCaprio’s exposition dumps—and that does still feel like a disservice to how Lyra is written by Pullman. But at the same time, the explanations she’s given by John Faa, Farder Coram, and Ma Costa—all of whom have various kinds of wisdom and power within the Gyptian community—fill in important portions of this narrative.

After being freed from the Gobblers by Tony Costa, Lyra is taken in by the Gyptians, and although she’s initially distrustful, they’re honest with her in a way that Mrs. Coulter wasn’t and that the Master of Jordan College couldn’t be. From Tony, she learns that the Gyptians live all around the country, not just in Oxford, and that they are coming together to fight the Gobblers. From John Faa, she learns that the Gyptians have a bond with Lord Asriel, who “has always respected our way of life,” but that she herself is “special on your own account.” From Farder Coram—who is played by Jeor Mormont himself, James Cosmo—she learns about why daemons change when children reach puberty, and how the animal your daemon settles on says something about your own personality and temperament. And from Ma Costa, she learns that Mrs. Coulter is her mother, a woman who cheated on her husband with Lord Asriel and who lived in shame for years for her indiscretion. Lord Asriel killed Mrs. Coulter’s husband to protect their daughter, and then stole their daughter back from a nunnery after the law placed her in the nuns’ care, and gave her to the Master at Jordan College to raise and keep safe. That explains why Mrs. Coulter is so obsessed with Lyra, and also why Ma Costa is so warm and welcoming to Lyra—she used to be her nurse. 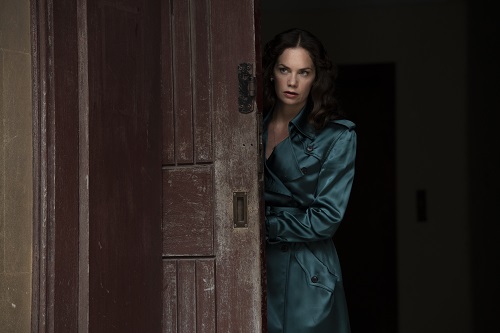 That’s a lot to process! And this episode keeps that Lyra/Mrs. Coulter bond at the forefront of everyone’s minds by giving a lot of screen time to each of them. Lyra’s time with the Gyptians shows some welcome feistiness to her personality, from that kitchen sparks scene with Ma Costa to her sassy retort to Tony Costa about his hair slick to her mixture of fear and exuberance when she successfully reads the alethiometer and learns that spy Benjamin De Ruyter is dead. And while Lyra is growing more confident and knowledgeable about herself, Mrs. Coulter is unraveling. We finally see true joy in this character this episode with her trashing of Jordan College and her sneering assertion of power over the Master, as well as her decision to send the illegal spy flies to track Lyra and her glee when one of them actually comes back. With the backstory given by Ma Costa regarding her expulsion from polite society after the reveal of her affair with Lord Asriel, we get a greater idea of who Mrs. Coulter is, and how atypical it is that the Magisterium trusts her at all, and how desperate she must be to hold onto that authority and to the Gobblers. And so while what Mrs. Coulter is actually doing remains a secret, we have a more detailed grasp on the character herself, and I appreciated that. The show needed to sell Mrs. Coulter as Lyra’s primary enemy, and I think “The Spies” helped move that along.

“The Spies” episode title refers to Benjamin and Tony, of course, as they disobey Farder Coram’s directive, break into Mrs. Coulter’s penthouse (Lyra couldn’t warn them about the Golden Monkey’s secret passageways throughout the apartment?!), and retrieve a list of all the children the Gobblers have taken before Benjamin kills himself rather than be tortured by Mrs. Coulter. (Benjamin’s panic and terror as the golden monkey held his bird daemon, and the way that Mrs. Coulter’s and the golden monkey’s attack moves mirrored each other, was very well done.) But I think “The Spies” refers to Lyra at this point too, doesn’t it? Her ability to read the alethiometer, intuitively and without the volumes and volumes of books it requires, is a power that no one else in the world has. With the right question, she can figure out anything that anyone is doing—Mrs. Coulter, Lord Asriel, or the Magisterium itself. And would the golden compass work in another world? Maybe. I’m sure Lord Boreal would like to find out.

+ Ruth Wilson and Clarke Peters were really perfect in that scene at Jordan College: Her snarling threats were very golden monkey-like, and helped further the connection between that character and her still nameless daemon, and I just love Clarke Peters in everything, so I really appreciate his weary and wary version of the Master. Plus, you know, he’s not wrong. He kept Lyra safe for 12 years and Mrs. Coulter couldn’t do it for what, like, two weeks?

+ I’m being sarcastic about the two weeks timeline in the preceding bullet point, but His Dark Materials is not a very good show in terms of communicating lengths of time. It is very much like Game of Thrones in that way, and that low-key drives me crazy as a storytelling vaguery.

+ Tony and Lyra recognizing each other would have held more power for me if the show had better incorporated her popularity with other kids at Jordan College. I still don’t know why that aspect of her identity wasn’t kept for the show.

+ You probably could guess this, but yes, I am on the side of “scholastic sanctuary.” And although I am still skeptical that this show will go as hard in the Magisterium = the Catholic Church messaging of Pullman’s books, I think that the Mrs. Coulter/Master scene and Lord Boreal’s conversation with Fra Pavel did a good job making the power of that entity more clear.

+ Yes, Stanislaus Grumman/Col. John Parry is played by Fleabag’s Hot Priest himself, Andrew Scott. And for book readers, now we know what Will looks like! He’ll be played by actor Amir Wilson! (Although blah blah blah you know I don’t love how the show is handling the reveal of other worlds blah blah blah.)

+ Mrs. Coulter’s description of “tired old men talking a tired old way about tired old things” - umm, is she talking about my review of Midway?

+ I liked that John Faa quoted a portion of a specific law to the Magisterium when they boarded Gyptian boats in the search for Lyra, because I thought that connected back to his comment about Lord Asriel always advocating for them, and I would like to think that Lord Asriel would make it a priority to help craft laws that would undermine the Magisterium at every opportunity. However, the Magisterium also ignored Faa quoting that law, which also tracks with the power dynamics at play.

+ Lord Boreal getting up into that guy’s face at the Magisterium, who was trying to eavesdrop on his conversation with Fra Pavel, was very intimidating and also pretty hot. I’m sorry! I’m weak!

+ As a cynical old jerk, I sort of snorted at Ma Costa’s “You’ll be whatever you want to be. Your path. That’s your choice and yours alone” to Lyra, but honestly, tween/teen me would have been overjoyed to have an interesting adult figure say that to me. So that was actually a nice reminder that this was a book series primarily written with children in mind, not just grumps like me. 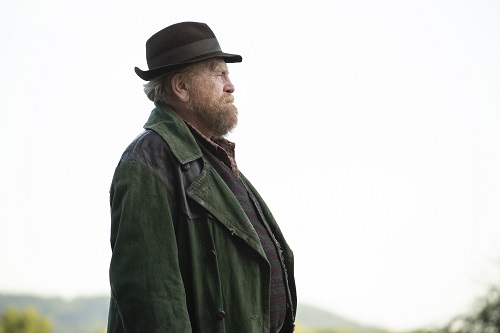 + Here is how Pullman describes Sophonax, Farder’s daemon, in his Dark Materials prequel The Book of Dust:

His dæmon, a large cat with fur of a thousand beautiful autumnal colors, stalked the corners of the study before leaping gracefully to Coram’s lap. Ten years after this evening, and again ten years after that, Lyra would marvel at the coloring of that dæmon’s fur.

+ File Boreal’s hacker saying “Maybe you acquire [a daemon] when you cross over” into your mind for further use.

+ “I betray my family for no one” was pretty dope; RIP, Benjamin.

+ Why would Pan doubt Lyra’s ability to read the golden compass? I didn’t care for that, and it was again sort of a weird pivot away from their relationship in the books.

+ I was pretty amused by Boreal’s “Are you out of your mind?” when he realized Mrs. Coulter had sent the spy flies after Lyra. Ma Costa describes them as “a bad spirit with a spell through its heart,” and those are the little details I loved about Mrs. Coulter in Pullman’s imagining of the character: That her line between love and hate is very, very slight. Once you grasp that about Mrs. Coulter, all of her relationships—with Asriel, with Boreal, with Lyra, with the Magisterium—make a good amount of sense.

+ Next week: Trollesund! Witches! The polar bear Iorek Byrnison! The first role ever in which I’ve disliked Lin-Manuel Miranda! See you then!

← Spoilers: Who is the Killer in Netflix's 'Earthquake Bird'? | 5 Shows After Dark: 'This Is Us' Fourth Season Fall Finale, 'Emergence' on ABC, →