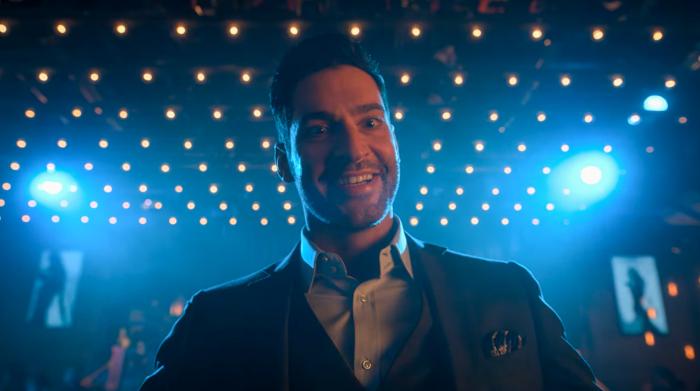 The problem with trying to write a review of Lucifer Season Five, Part Two, is that it’s the television equivalent of spun sugar. It dissolves in the mind like cotton candy on the tongue, leaving only a vaguely sweet memory. I’ve seen every episode of the show at least once within the last 12 months. And yet trying to recapture the specifics leaves me feeling like a raccoon wondering where my delicious treat went.

That’s not necessarily a bad thing. We don’t watch Lucifer for its philosophical underpinnings or plot structure. We watch it for the mindless entertainment value and pretty, pretty cast. And none are prettier or more entertaining than Lucifer Morningstar, the Father of Lies, Prince of Hell, Red Dragon, Old Scratch himself. When we last left Lucifer, he and Amenadiel (D.B. Woodside) were about to lay a Biblical smackdown on Michael (also Tom Ellis because, duh, evil twin), voted Heaven’s Hottest Hunchback three millennia running. Why? Well…

See, Lucifer is pissed at Michael because he kidnapped Chloe (Lauren German, aka “the weakest link”) so he could convince her that Lucifer’s newfound invulnerability — discovered when Chloe’s ex Detective Dan (Kevin Alejandro) shot Lucifer at Michael’s instigation — means Lucifer no longer loves her. And Amenadiel wants to kick Michael’s ass because Michael got all up in his head about his baby Charlie with Doctor Linda (Rachel Harris, who is somehow 50 freaking 3 years old) being mortal, plus Charlie got sick which made Amenadiel freeze time in a moment of parental panic. The archangel Michael did all this because he’s an angelic Dawn Summers, whiny and petulant because their sibling gets all the attention. Maze (Lesley-Anne Brandt) is on his side because she feels manipulated and betrayed by Amenadiel, Lucifer, and the universe. And things are about to get Old Testament when lo and behold, God (Dennis Haysbert, slumming it) arrives to bring the family much-needed affordable car insurance reconciliation. Meanwhile, Ella (Aimee Garcia) feels betrayed because her boyfriend turned out to be a serial killer, Chloe looks perplexed, and Dan’s freaking out. 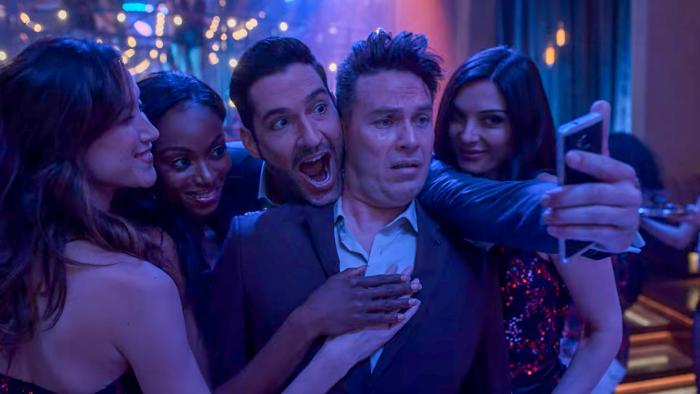 Honestly, thank God (or Dennis Haysbert) for Kevin Alejandro this season. Often wasted as the straight man or Doubting Thomas of the series, Dan’s panic at finding out the world is a much stranger place than he thought makes the first four episodes of this latest batch a lot of fun. Kevin Alejandro does a fantastic job making Dan’s mortal terror both believable and, most of the time, pretty funny. It’s not every day you find out that not only is God real and kept a tally of every misdeed, but you also screwed his estranged wife. It doesn’t even take into account his failed assassination of the Devil, who isn’t exactly what one would call forgiving. 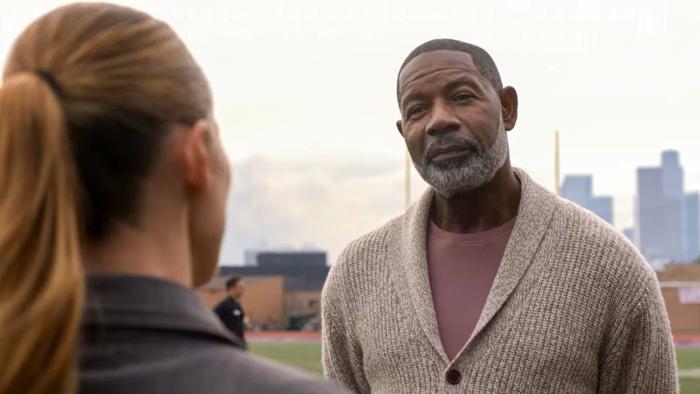 But the show isn’t called Daniel Espinoza, apart from one glorious episode. So what’s up with Lucifer? Well, his dad is in town. God wants his sons to stop fighting and, perhaps, to make up for some of his past mistakes as a Father. It doesn’t go well; Lucifer’s daddy issues are literally Biblical in nature. As if that weren’t enough, it turns out God is losing his memory and control over his powers. This leads to exploding detectives and, worse, the dreaded musical episode. Now, I get they’re de rigueur at this point. If your show involves supernatural entities, eventually they will make you sing. But the thing about musical episodes is they require actors who can, well, sing. Tom Ellis can sing, as he’s demonstrated many times. Rachel Harris can sing. Guest star Debbie Gibson can sing. If they’d left things there it would’ve been fine! But Garcia, Brandt, and Alejandro get performances too, all toeing the line between funny and uncomfortably awkward and occasionally falling off. Maze’s performance of Bad To the Bone tries so hard to be sexy that it’s absurd, quite the accomplishment given how stunning Lesley-Anne Brandt looks simply sitting in a chair. And the less said about Scarlett Estevez’s attempt, the better. She has done a wonderful job as Trixie for the past 5 seasons, cute and plucky without being obnoxiously precocious, so it feels cruel for the writers to give her a musical number she can’t match. 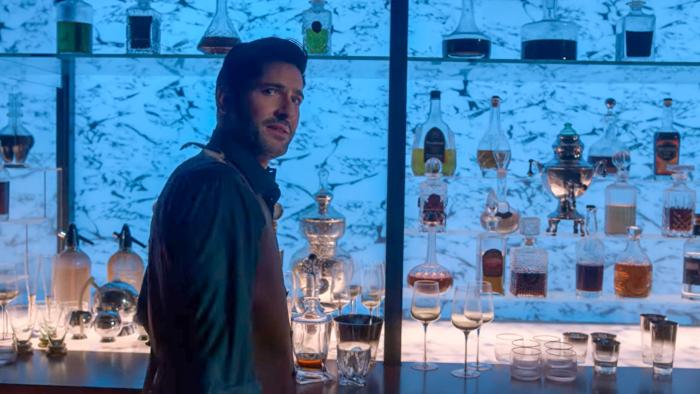 It’s a shame because the writing, in general, feels like an upgrade from previous seasons. Lauren German’s Chloe finally, finally realizes that Lucifer makes every case about himself. She finally serves as more than a sounding board and audience stand-in, and it’s a significant improvement. It goes without saying that Dennis Haysbert makes a phenomenal deity, particularly when he’s allowed to do more than stand there looking benevolent. The anguish in his voice as he tells Lucifer about his loss of control will resonate with anyone who’s felt their mind or body slip. Tom Ellis does a remarkable job as the son whose invincible father suddenly isn’t, a role many of us find ourselves in as our parents reach their senior years. He looks like a man feeling the ground wash away from beneath his feet. His Michael, on the other hand, crosses too far into camp. An archangel can only snivel so much before it gets tiresome. I understand we’re supposed to dislike the odious little toad, but there are limits. Dr. Linda remains the often consulted but rarely listened to voice of reason; Amenadiel is the new father overwhelmed with responsibilities at home and facing a daunting promotion at work. Unless Lucifer takes it, or Michael does. Inbar Lavi returns as Eve, tempting as a crisp apple, and Maze continues to kick ass without bothering to take names in her hunt for connection. Lucifer and Chloe actually have a few grown-up, adult moments as a couple. 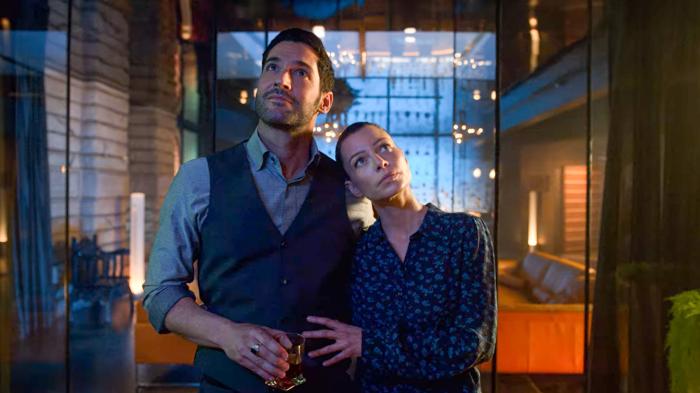 All in all, it’s a solid bunch of episodes, though after Daniel Espinoza: Naked and Afraid they all feel a little lackluster. If you’re a fan of the show your opinion isn’t likely to change. If you’re not, well, you aren’t likely to start a show on season 5, so you better catch up. The sixth and final season is still to come, most likely late 2021/early 2022. Maybe I’ll even remember some of season 5 by the time it arrives!

← Review: 'Starstruck' on HBO Max is Bridget Jones in a Reverse 'Notting Hill' | Soderbergh Brings Together a Rogue's Gallery for 'No Sudden Move' →