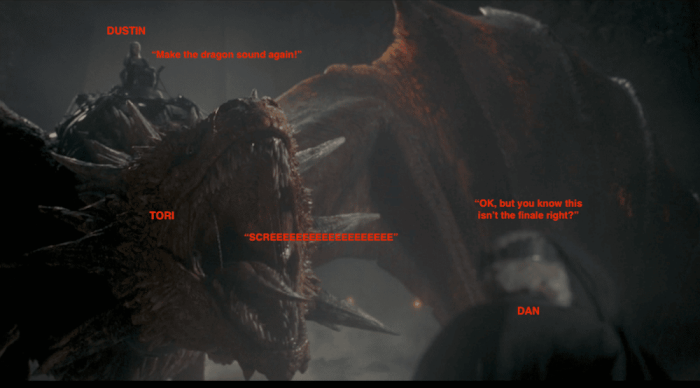 Hello faithful listeners! ‘Tis I, Tori Preston, one of the co-hosts of Podjiba and specifically one of the “not Dan” ones. As you may recall, Dan is holed up in an undisclosed location doing [redacted] because [redacted], and though he was able to dodge his handlers for an hour in order to join us on the pod, I’m helping get this bad boy off the ground and into your ears this week. In my role as “not Dan” I’ve been tasked with editing (or “editing”) our podcast, and I also get to write this here article about our episode, where I’m supposed to tell you what we talked about and maybe provide some time codes to help guide you. Only I, uh, forgot to write the time codes down? So instead I’m gonna rattle some things off from memory and we’ll make it a game, like a scavenger hunt! The list below is not in chronological order, and includes one (1) event that did not occur during the recording. Check off what you hear when you hear it, and see if you can spot the lie!

Ready? Ahem… This week on Podjiba:

— I present my mixed feelings about the current love triangle on Kung Fu in the return of Tori’s Kung Fu Corner!

— We are diversifying our elemental chats with FIRE TALK, a spin-off of our beloved fan-favorite WATER TALK!

— Dustin also embarks on a would-be epic installment of Dustin Explains Television Presents: Dustin’s Five Minute Free For All, only he fails to get through all 50 episodes of television he watched in the last week so it’s a bit of a letdown, really.

For those keeping tabs at home, you’ll notice that the thing that didn’t happen during the podcast is Dustin saying he’s quitting La Brea. He told us that after we’d stopped recording, so it’s a lie on my part saying it’s in the episode … but more importantly it’s a lie on Dustin’s part because you know he won’t be able to stay away from that show for long. He always comes back. He still watches Riverdale, after all!

Podjiba! The only television podcast where #DustinLies on and off air. We’ll be back next week, or maybe in a couple of weeks, it all depends really on Dan’s [redacted] schedule and how willing Dustin is to let me coup this show out from under him like Alicent with a child to promote. Find out wherever fine podcasts are available, or even right here!