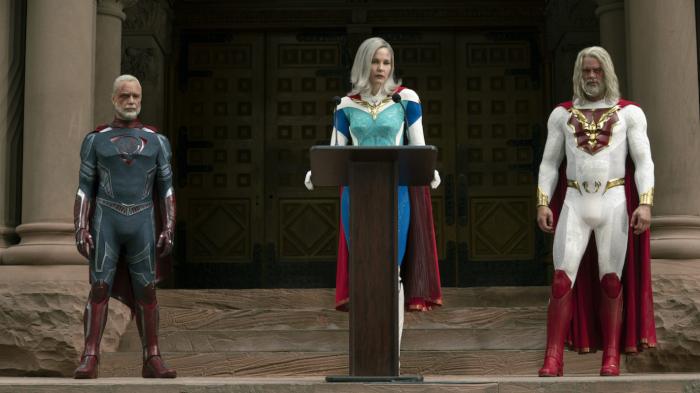 Full disclosure: I knew next to nothing about Jupiter’s Legacy before I started watching it, aside from it being the umpteenth superhero comic adaptation released over the last year or two, of course. Now that I’ve seen it, I still can’t quite tell you what it’s all about. All I know is that it’s a hot mess of shocking proportions, with so little cohesiveness that it’s hard to figure out what’s salvageable in this heaping jumble of ideas and story direction.

Based on Mark Millar’s comic series of the same name, the series stars Josh Duhamel as Sheldon Sampson, a superhero who goes by the name of The Utopian. Grace (Leslie Bibb), Sampson’s wife of sixty years (no, that number is not a typo), is Lady Liberty, while their son Brandon (Andrew Horton) is Paragon. As you can see, subtlety is not this show’s strong suit. They’re part of a superhero team known as The Union, who seek to save the world while keeping to The Code, a set of ethical guidelines with few rules but contains little thought toward changing times. The missing component of this family of do-gooders is the Sampson’s daughter, Chloe (Elena Kampouris), who has felt stifled and abandoned by Sheldon’s brand of Christianity-rooted heroism. She rebels by being a hard-partying model, who refuses to utilize her abilities for heroic means. Although Brandon seems more well-adjusted on the outside, he’s undergoing almost as much inner turmoil, but instead of rebelling like his sister, he pushes himself to try to reach his father’s standards while giving little thought to his own.

There’s much more to the story than this, but the heart of it is family and duty, as well as the ethics of taking a life. All of this could be pretty interesting, except that between the visions, zombie hallucinations, dual timelines, an obstinate dedication to drawing out basic information like how their powers came to be (you will be waiting the entire season, I assure you), and some terribly uneven acting, it all gets lost in the sauce.

Yet somehow, none of this is as in-your-face bad as the wigs. 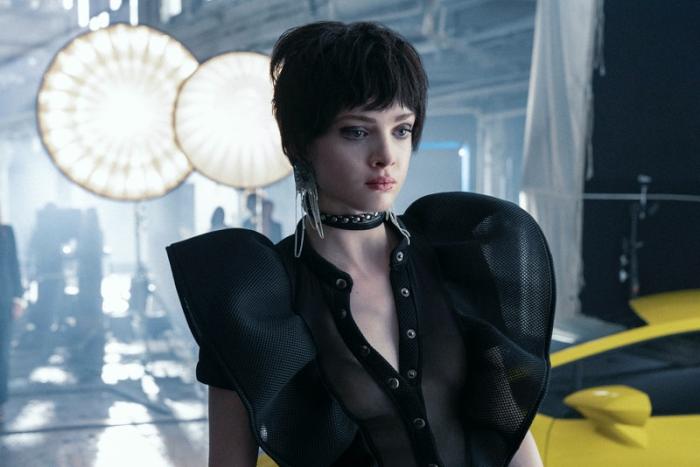 Dear God Almighty. Was there a budget crisis in the hair and makeup department? Inquiring minds want to know.

Despite it only being eight episodes, it feels like an eternity. Part of the problem is the show’s reliance on flashbacks to convey information. It’s constant, with the majority of the episodes switching back and forth every five minutes (not hyperbole) between the present day and the chain of events that happened in the 1930s that led to the origin of The Union and their powers. The story takes us from The Great Crash of 1929, on through the Dust Bowl, and out to stormy seas in pursuit of a vision, with little more than a pocket watch and intuition as a guide.

None of it will matter.

The entire thing plays like a drunk Damon Lindelof hastily scribbled some random thoughts on a bar napkin before taking an Uber home only to wake up the next morning, groggily discover it in his pants pocket, chuckle, and toss it in the trash. The story structure is already choppy with the ever-present whiplash past/present switch; adding in random elements that seem to be imbued with meaning, only to have it amount to a shrug, only served to leave me frustrated beyond belief. It feels half-baked, like a draft that needed more workshopping that somehow made it to the screen as is.

The storyline revolving around the present isn’t any better. Most of the drama revolves around superhero in-fighting, with Chloe’s dramatics taking the lead. Between her hostility toward the expectations of being a hero—which could be interesting in the hands of a good writing team, but manifests here with huffy sighs and staredowns so corny that I half expect Kampouris to turn to the camera and chirp “You’re watching Disney Channel!”—and her anger at her holier-than-thou father, she sucks up most of the oxygen in the room (along with drugs; she’s basically a superhuman Mia Wallace). It leaves little room for Horton who, as heir-apparent Brandon, only gets to switch to a few emotional settings. Character-wise, Bibb gets the most to do here, but it’s not enough to stave off the boredom brought on by a story that’s trying to do too much without doing the work of bringing it all together. As far as Duhamel goes, I honestly feel bad for the man. He’s trying so hard to navigate all of the character beats, but the script calls for so many antics that he settles into either dourness or utter hysterics, with neither one seeing any real success.

I try to find the good in everything I review. Contrary to popular belief, the overwhelming majority of critics don’t do this line of work out of meanness or a desire to cut others down; they do it because they love the art form. With that said, Jupiter’s Legacy is enough of a mess that I can’t recommend it to anyone in good faith. Everyone involved deserved better than this, with the exception of whoever had final say over those wigs and declared, “It’s FINE.” Between the incoherent plot and writing so inconsistent that supernatural elements are left unexplained (looking at you, silly meth-fairy dust) but scenes that are playing out directly in front of our faces are explained by the performers—“Look at them…they killed each other” as the camera pans to a pair of skeletons, each holding a weapon lodged into the other—it felt like an absolute chore to watch. If you’re in the mood for some superhero fare, I invite you to look elsewhere, as there are more than enough offerings right now (some of which are incredibly well done!) to please just about everyone. But the only legacy you’re going to find here is nothing but one of disappointment.

Kaleena Rivera is a tv and film writer. When she isn’t wondering how long Blackstar’s (Tyler Mane) makeup took, she can be found on Twitter here.