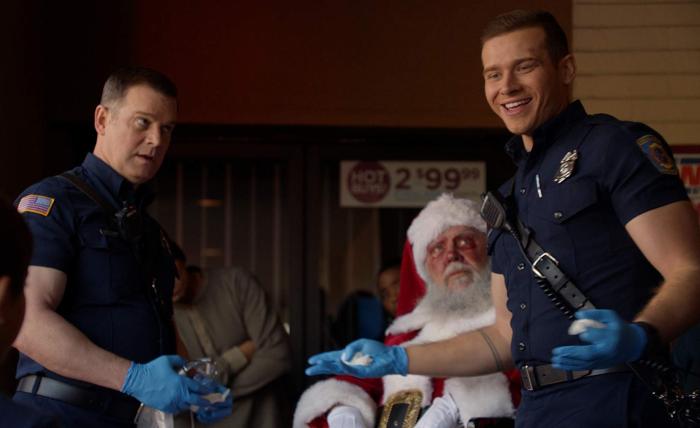 It’s that festive holiday season once again, which means our favorite network shows are entering their mid-season hiatuses … and naturally, 9-1-1 ending 2019 with a Christmas-themed episode full of good cheer and (checks notes) heart-warming rescues from plane propellers. So you know, business as usual!

You know it's serious when Bobby requests every tool. #911onFOX pic.twitter.com/eA1ffoktfF

But first, let me address the elephant in the room: No, Bobby doesn’t have cancer. We were all waiting to see if his brush with toxic radiation would have any lasting effects on our dear captain, and just like every other cliffhanger this season, the answer is a big fat NOPE. He’s fine! All of his tests came back clear! That incident amounted to a mild bit of drama followed by an almost immediate return to the status quo. Instead, the episode revealed that it’s another character whose fate is on the chopping block thanks to a tumor … Athena’s ex-husband, Michael! It’s clear something is up with him since he spends the entire episode getting weirdly emotional, sleepwalking across town to crawl into bed with Athena (?!), and eventually pitches himself straight through a plate glass window during a dizzy fit. He tells Athena that he’s just sleep-deprived, but by the end of the episode, he confesses to Bobby that doctors have discovered a brain tumor, and he’ll need to see a specialist after the holidays.

Does this mean he’s dying? On the one hand — I hope not, because Michael has always been a delightful supporting character, and one of the show’s strengths has been exploring Athena’s evolving family dynamic and in particular her relationship with her ex. Of course, it might be the right time to write him off the show precisely because Athena has remarried, and it’ll be an easy way to put her through the emotional wringer. After all, you know Angela Bassett could stoic the hell out of a funeral episode. Not helping matters is the IMDb page of Rockmond Dunbar — the actor who plays Michael — which has him listed as starring in an upcoming TV show called Revenge Wars. That could be a sign that his time on 9-1-1 is definitely coming to an end and he’s moving on, but considering there is almost no information available about Revenge Wars (I couldn’t find a broadcaster, a showrunner, or a premiere date anywhere), I just don’t know how seriously to take it.

And speaking of not knowing how seriously to take something, let me quickly tell you about Maddie’s “exposure therapy” last night. You see, there was this weird side tangent where Maddie tried to come to terms with her feelings about killing her ex-husband Doug, and it involved retracing her steps to the spot where she fought him in the woods, reliving her terrifying abduction along the way. It all culminated in her basically telling the trees about how she’s going to forgive herself for surviving or something? It was so rushed and weird, y’all — but also, her entire storyline has been weird this season, starting with her stalker/vigilante stint. In fact, this season it’s often felt like her character is porting over from some other show entirely — a Lifetime channel thriller instead of a Fox procedural. Which is a shame, because as much as people liked to joke about how Jennifer Love Hewitt had the unenviable task of replacing our beloved Connie Britton’s Hair (we miss you still, bae!), the show actually delivered an often surprising exploration of domestic abuse and trauma through her character last season. It was often sensationalized, sure, but it also trucked in believable, nuanced emotion. I don’t know why the show has gone the complete opposite direction with Maddie this season, but I’m still rooting for her to get some substance. Maybe after the hiatus!

Anyway, enough about the characters and onto the cases!

Miracle On The Tarmac
I wasn’t kidding when I said there was a plane propeller rescue. It all starts with an overloaded baggage cart that goes haywire. A handler jammed a set of golf clubs against its gas pedal, causing it to drive out onto the tarmac and spin around in circles, spilling suitcases everywhere. Another handler hops in a different cart and rams into the first one, stopping it in its tracks and saving the day. Up until this point, the situation is clearly inspired by this video that went earlier this fall, in which a catering cart with a jammed accelerator cause mayhem at Chicago’s O’Hare Airport.

Of course, the cart is only the jumping off point for 9-1-1. The real emergency is what happens after, as the heroic baggage handler stands up to bask in the cheers of the onlookers… only to get sucked into the engine of the nearby plane when it unexpectedly starts! The twist? HE SURVIVES, INTACT! It turns out those pesky golf clubs got sucked in first and jammed the engine before it could injure him too seriously.

I’ll be honest, I figured this part of the episode must have been a complete fabrication, and it mostly is, except that I did find a story about a U.S. airman who got sucked into the engine of a jet fighter during a launch check back in 1991. He survived because a particular quirk of the design meant that there was a space for his body to get wedged before it hit the fans — and because his helmet went in first, alerting the pilot to cut the engine before his body was endangered.

The Most Literal Blue Christmas Ever — Or The Real Doctor Manhattan?!
Bobby’s team is called out on another scary situation, in which a woman wakes up to find herself blue. Like, literally, completely, unexpected all Smurfed out. What happened was that she had a terrible toothache, and to deal with it she used a topical numbing gel — but like, a LOT of it. Tubes and tubes of benzocaine were in her trash, and she experienced a fairly rare reaction to it. The blueness is called cyanosis, but the cause is a blood condition called methemoglobinemia, in which the iron in a person’s blood changes to a form that doesn’t bind as well with oxygen. Under-oxygenated blood is darker, and since this is now spread through the entire body, if gives the skin a bluish tint. It sounds kinda fun and funky, but it basically means your cells are suffocating. This is a known and treatable condition, but the connection to benzocaine was likely inspired the case of a 25-year-old woman from Rhode Island with a toothache and blue skin, which was reported in the New England Journal of Medicine earlier this year.

“I saw Mommy spraying Santa Claus”
Finally, I suppose I should mention the case of the woman who pepper sprayed a bunch of rude shoppers — and a mall Santa! — during the start of this week’s episode. Sure, it was inspired by a real incident, but it also was hardly surprising. Black Friday is hell, this is known. The only reason I’m bringing it up is because it led to the best moment of the night, as Buck reassured a group of worried children that Santa wasn’t, in fact, dying… 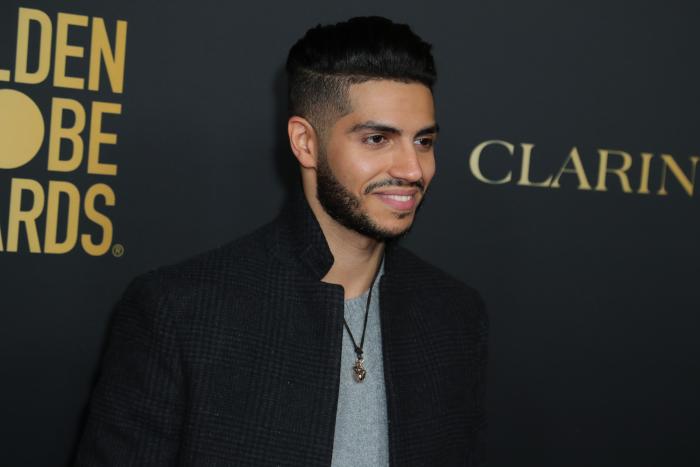