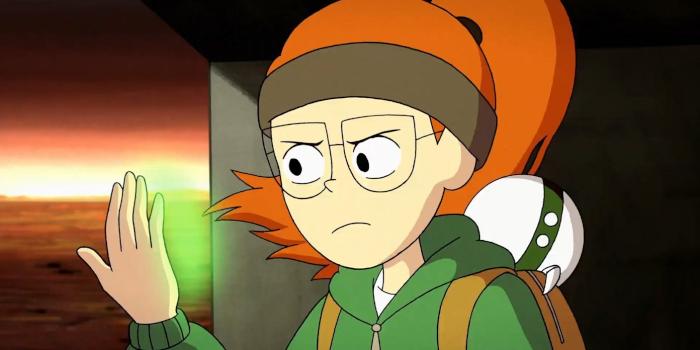 'Infinity Train': The Best Science Fantasy Series No One is Watching

It would be easy to summarize the HBO Max series Infinity Train by comparing it to any number of sci-fi and fantasy properties. However, I don’t feel the need to since showrunner Owen Dennis has given us something so wholly unique that to try to rattle off every comparable IP—of which there are many, not because this is a pastiche, but because the world he’s created is so layered — would give it an air of the conventional when it’s anything but.

The series opens with a young teen named Tulip who’s been having a difficult time adjusting to her parents’ recent divorce. After an argument with her mother, she leaves home and as she walks into the nearby woods, a speeding train emerges from the trees. When she approaches, it comes to a stop. Once Tulip steps aboard, she finds herself in an entirely different world. Each train car is its own thematic setting, which can be the size of a mere room to an entire sprawling landscape. A single red door is the only passage between each world and often requires some sort of puzzle to be solved before it will allow a rider to move on to the next car. To make Tulip’s situation even more alarming, she now has a random number inscribed in her right hand. It’s glowing green and appears to be doing some sort of countdown. What happens when it reaches zero remains to be seen.

Infinity Train boasts a star-studded cast the likes of Kate Mulgrew, Ben Mendelsohn, Lena Headey, and Bradley Whitford. I’m also morally obligated to tell you that Ernie Hudson plays a corgi king. Yes, a royal (and deeply noble) corgi who wisely rules over a kingdom of corgis. It. Is. Adorable. Though it’s intended for kids, the themes the show engages with transcend age. From confronting your personal failings and rectifying past mistakes, to betrayal and psychological trauma. It’s a deeply sophisticated and stylish show, and while some of the themes are emotionally mature, I believe it’s fine for kids 8 and up. If they’re very sensitive, I would take caution with season 3, as it gets very intense, with several scenes involving murder, attempted and otherwise (nothing graphic as it occurs off-screen, but still potentially rough for young ones).

The animated anthology series originally aired on Cartoon Network, only to later be picked up by HBO Max for its third season, which aired this past August. Each episode is approximately 11 minutes in length, which means that at 10 episodes per season (with each season being its own self-contained story), it wouldn’t be too difficult to watch all 3 seasons in a single day. I highly advise that you savor it, however, because at last check, the fate of the show is up in the air and at risk for cancellation. Though there’s no loose ends, Dennis has ideas for more seasons. Between all the possible worlds and various denizens (the creatures residing on the train), there are easily years’ worth of stories to be mined here. I would love to see it continue, and I hold out hope that as more people begin accessing HBO Max, word will spread on this deeply imaginative and charming show.

All three seasons of Infinity Train are available to stream on HBO Max.

Kaleena Rivera is a writer. You can find her peer pressuring people to watch Infinity Train on Twitter.