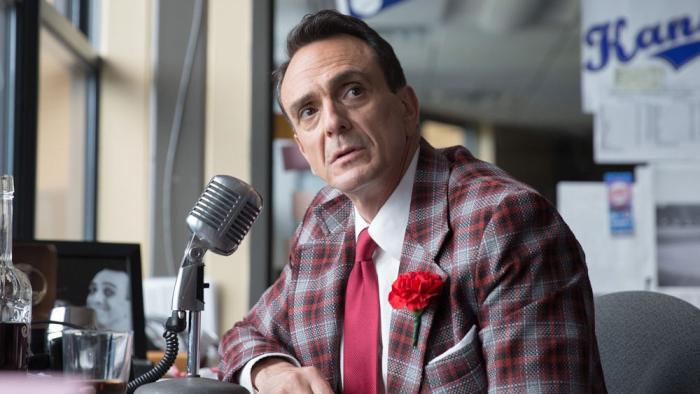 IFC's 'Brockmire' Is 'The Good Place' For Broken People

Here’s the easiest way to tell if you’re the kind of person who would enjoy Brockmire: if you don’t laugh at the following exchange, you won’t like the show.

Brockmire - You ever made eye contact with someone while they stuck a finger farther and farther up your butt? And you don’t know how much more you can handle, but they do?

Joe Buck - I was born in Florida. Of course, I’ve had a finger in my ass.

And in case my previous writings have not made it clear, I’m very much the kind of person who enjoys that.

Brockmire, whose fourth and final season premiered on IFC last night, is super great. It might be the funniest show on TV, but that’s only because not even Seth Meyers is funny enough to overcome the news right now. But, as my rewatch of the first three seasons over the past few days has reminded me, Brockmire is also ungodly dark and depressing at times. Touchingly dark and depressing, not unbearably so, but still dark and depressing. For those of you who haven’t watched the series yet (and you should, it’s available on Hulu and at only twelve hours can be knocked out over a couple of days if you really put your mind to it), you should either duck out or prepared yourself for spoilers.

Because what we really need to talk about is how Brockmire is like The Good Place for broken people, and that makes it a better show. See, I love The Good Place. Love it. Think it’s great, and one of the most clever shows ever. But it’s a Mike Schur show. Which means that even when a show deals with the four main characters literally being in hell, everything is kind of nice. Pawnee never had any of the meth problems that an actual small town in the midwest would experience. Everyone at Dunder-Mifflin came out alright despite recessions and divorce and, you know, working for a total buffoon (who turns out wasn’t actually even a buffoon because this is a nice place). Even Peralta and the other cops don’t have particularly bad calls to respond to even though the deal with murder on a daily basis. Everything is nice, and that robs the show of the weight needed to make an impact with me.

Brockmire’s got weight. A shitton of it. The first season eased us into it by playing Brockmire’s on-air meltdown after catching his wife cheating and subsequent descent into alcoholism and suicidal tendencies as a source of comedy. (Seriously, if you haven’t watched the opening of the series, you really, really should.) Brockmire was figuring out how to work his way back into the baseball world, how to face down his past, and how to make Amanda Peet fall in love with him. (If you can figure out the last one, please pass along said information). Season two took all of those hopeful feelings and urinated all over them in an alley in New Orleans. Without Jules (Peet) around to make him want to become a better person, Brockmire becomes a much worse person. And after he loses his shot at calling in the big leagues again, he begins actively destroying relationships and trying to drink himself to death. And the worst part is how painfully funny the show still is in the middle of all that depressing. I’ve literally got no idea how they do it except that series creator Joel Church Cooper is maybe a wizard. Or some kind of high-level magician. Either way.

All of which explains why the show is great, but not why it’s The Good Place for broken people. Which is where the truly phenomenal third season comes in. See, having finally actually, maybe hit rock bottom near the end of season two Brockmire decides to finally get sober in order to repair his relationships. The good news is, he does. The bad news is, being sober really only helps to point out all of the tedious, daily tasks required to become a better person. And he just keeps working on trying to determine what he owes to others. Only instead of a kooky afterlife and Sex on Wheels Demon to help him through it, he’s got a fabulously bitchy sponsor (Martha Plimpton), a new on-air partner (Tawny Newsome), and the resolution of a thirty-year feud with a rival announcer (JK Simmons) that’s so absurdly touching, I swear to god, I’m tearing up right now thinking about it. Without the “niceness” of a Schur show, we get the brutally honest fact that at the dead center of humanity is the infliction and endurance of pain. Brockmire the show is great specifically because Brockmire the character tries and fails repeatedly to do right. To be good to the people around him, to make himself less selfish, and to become a better human, and he has to do it all without a Chidi. But luckily, because this is still a show based in harsh related, humor, and Tampa, FL, he does have a one-hundred-year-old giant turtle named Clemenza to help him out.

Or at least, he had Clemenza until last night’s episode pitched us (yes, that was punintentional) ten years into the future. I don’t know exactly when the episode was written, but given that I’m writing this post from my apartment while essentially on lockdown, the predicted future near apocalypse with its rising temperatures social unrest and a somehow even less tolerable Arizona, it felt pretty accurate. And, as Brockmire explains to his college-bound daughter (oh, right, yeah, Brockmire has a daughter now. Don’t worry about it), everything is mostly terrible.

New York is now just a flooded playground for the one-percent of the one-percent. The Bronx is now Brooklyn, Brooklyn is now Manhattan, Manhattan is now Dubai. And darling, the worst part? The worst part is Staten Island is still just Staten Island. That thing is a civic black hole that the light of gentrification and human decency can’t penetrate.

See? Do you see how great this is? Brockmire spent an entire season dealing with his demons in order to get and stay sober, to get his career back, to raise his daughter well, and he’s still an asshole! Being good, being a truly good and decent person who works hard to maintain his relationships, isn’t about being “nice.” It’s about continually trying to be the best version of yourself because you owe it to those around you to not make their lives worse in an already terrible world. Brockmire has overcome his addictions and most of his demons so that he can be the best person he can be for the people who love him. It’s just that the best person you could be sometimes is still a giant asshole. I mean, you didn’t even mention Queens, Brockmire. You dick.

← Twitter Reacts to the Canals of Venice Getting Clean Because of Coronavirus | 'On My Block' Season 3: We Need to Talk About That Ending Right Now →