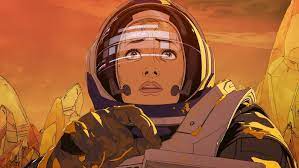 'Humans Are the Actual Worst!': 'Love, Death, and Robots' Season 3

Love, Death & Robots is, as always, tremendous. Season three is a series of dreams that unfolds with a kind of absolute possibility. I’m never tired of the soft interlude between one episode and the next, when the potential for the following imaginative leap is gently waiting behind the credits.

For those just discovering this dreamscape of a series: it’s frankly some of the best of what sci-fi can be. That is, it gives us an elsewhere in which to imagine our own mode of being—a radically different set of rules that can include anything from sentient planets to robot anthropologists to murderous sirens. Each episode is an animated short, each roughly ten to twenty minutes long, that plunges the viewer into a fresh reality, with all the concise elegance of a masterfully told short story. If my admiration is shining through, it’s because it’s hard to contain. What else has this kind of imaginative scope—this let-it-loose creative freedom meets time and resources—of Love, Death & Robots?

Patrick Osborne, of 2014’s adorable Feast fame, opens this season with a vision of post-calamity Earth, via a lark of a scientific expedition across Earth, through the ruins and scattered bones of humanity’s various modes of apocalypse, from survivalist camps to libertarian sea-nations to cannibalistic nuclear bunkers. This exploration is all conducted by a trio of lovable and macabre robots, reveling over the destruction of the species that in turn allowed their own mechanized civilization to rise. Human skeletons lie in telltale tableaux, explicating the various frantic, horrific, and inhumane ways humanity tried to cling to life. The robots laugh. “They were mean to robots and then robots killed them!” “Humans are the actual worst!”
And it goes from there.

Some gems of the season include Emily Dean’s “The Very Pulse of the Machine” and series producer David Fincher’s “Bad Traveling”—two vastly different stories of space exploration, both powered by brutally beautiful tension.

Fincher’s much-anticipated episode, only the second in the new season, shifts tone rapidly to a grotesque and nightmarish horror story of the high seas on a distant planet. “Bad Traveling” is a psychological standoff between a monster of the sea and monstrousness within the human crew. Cue the Independence Day-style alien puppeteering of corpses. It’s more classic psychological thriller than anything else, and I loved it.

Dean’s “The Very Pulse of the Machine” is tailor-made to my nerdy English major heart. An astronaut is trapped in a grueling odyssey for survival on Io, one of the moons of Jupiter. But a simple quest for survival becomes a hallucinatory venture of wondrous possibility, swirling with Romantic poetry and unforeseeable horizons, “voyaging through strange eons of thought, alone.” It’s gorgeously dreamlike, with the strange, instinctive dream-logic carried delicately into a roughly fifteen-minute run.

Throughout, the season rests on a preoccupation with power—specifically masculine, militarized power—and its abuses for the sake of convenience, or simply of business as usual. In Jennifer Yuh Nelson’s (of Kung Fu Panda!) brutal “Kill Team Kill” episode, a brass-tacks American military team embarks on a brutal warzone journey via simplistic animation that brings to mind comic book pages and GI Joe cartoons. The sci-fi emerges in the sudden appearance of a mechanical CIA-engineered bear-monster. War-machine-massacre horror unfolds, following the Whedonesquely funny crew of white men that seems to run on inexorable humor, including some pointedly distasteful “Jihad-Joe Killing machine” jokes. The vignette is a display of pointless slaughter in the name of more and more advanced technological weaponry.

“Mason’s Rats,” one of my favorite of the season, follows a similar tack, tracing the shifting sympathies of a futuristic Scottish farmer whose rat infestation has begun to exhibit “an acceptable level of tool use”—e.g., has evolved into a small ramshackle civilization in his barn. Mason meets the rats with an increasing scale of violent extermination machines as the rats wage a hopeless war for survival. “The Swarm” tells another story of human hubris in the face of a foe they do not understand, while the season finale, “Jibaro,” depicts strange dynamics of sexual violence and military might, tumbled on their cliched heads. “Night of the Mini Dead” features a helpless U.S. military and a global wave of nukes. “In Vaulted Halls Entombed” introduces a maddening cosmic horror that shatters any perceived might the highly trained soldiers facing it might have foolishly assumed.

All over this season are stories of militarized failures, familiar structures of power confidently deployed and then destroyed. Besides simply being damn good storytelling, this new season speaks to a sense of helplessness in the face of intelligence too strange or new to be readily understood. Fear breeds a response of force over and over again. Humanity tries to reassert its power, its reason, its dominance.

This is undoubtedly a reductive response to a dynamic, genre-breaching, boundary-pushing series. It’s almost as if it’s a deeply nuanced series that should be watched and appreciated on its own terms. But I can’t help thinking of the insanity of bullets, bombs, and military preening in the face of an enemy that couldn’t care less—say, a virus spurring a global pandemic.

And as always: The series relies on gore to an extent that can be stomached largely because of the animated nature of the visuals. Dismemberment, bodies shredded by bullets, grotesquely distorted corpses…you get one or more in just about every episode. While the level of gore can sometimes read as flippant, it’s deployed to great impact and is certainly effective in distinguishing Love, Death & Robots from a jaunty action-movie spectacle.

All-in-all: another triumphant season of a treasure-trove anthology.

But boy, it sure is something to have this fantastic sci-fi anthology generating income for the same streaming platform that repeatedly promotes stale, whiny comedians trying to proffer transphobia as “edgy” humor year after year. So yeah, humans are the absolute worst.


← Demonic Pooh and Piglet Will Go on a Rampage in 'Winnie the Pooh: Blood and Honey' | The 'New Amsterdam' Season Finale Was a Bleak, Chaotic Mess →