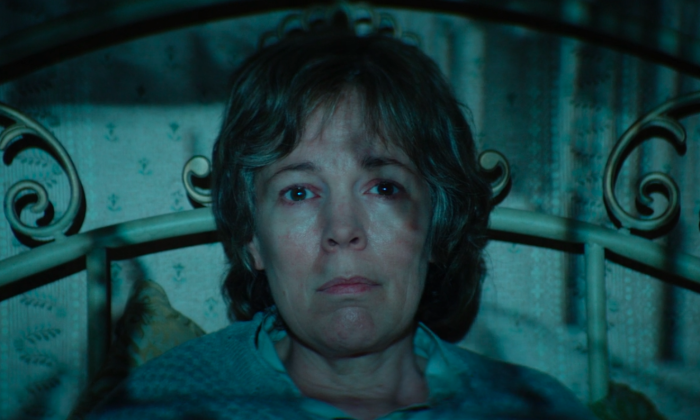 The most direct way to comprehend the thrust of HBO’s Landscapers, the true-crime drama which revolves around the 2014 murder conviction of Susan & Christopher Edwards, is to read the text that bookends the opening and closing of the series: “To this day they maintain their innocence.” Although the series has all the hallmarks of the endless true crime entries that precede it, what with being based on a highly-publicized crime complete with eager investigators and unfurled secrets, the four-episode series is far more concerned about the lovers at the center of this crime, specifically, their tremulous hold on reality and dependency on one another. For director and series’ co-creator Will Sharpe, facts are ancillary to the literal production of the Edwards’ claim of what exactly happened the night of the murders and their downfall. It’s less about getting to the bottom of the crime as much as it’s an attempt to understand the perspective of these unlikely criminals.

The series opens with the British couple residing in France. Their life appears quaint though financially strained, as Christopher (David Thewlis) has had trouble finding work. Despite their money woes, Susan (Olivia Colman) is unable to resist indulging in her love of film memorabilia, especially anything to do with Gary Cooper. Though a touch eccentric, the two couldn’t seem any more normal, which is why the discovery of Susan’s parents buried in the backyard of their former home becomes instant news fodder. When the Edwards return to England in a misguided effort to clear their names, cynical detectives pounce on the inconsistencies in their heavily-rehearsed story, ultimately leading to their trial and subsequent conviction.

Besides the double murder going unnoticed for fifteen years—on what would have been his 100th birthday, Susan’s long-dead father received a notice from the U.K. government to assess his retirement benefits, which is what spurred their flight to France—the most peculiar aspect of the investigation is the seeming gentility of both suspects. As we see on the show, when the excavated bodies of Patricia and William Wycherly (Felicity Montagu and David Hayman, respectively) make the evening news, there’s no discussion of going ‘on the lam’ or any of the other old-time colloquialisms so commonly found in the classic films Susan so adores; instead, Christopher constructs a courteous email declaring their intention to return to England for questioning. After the arrest, Susan uses the provided phone to contact the attorney coming to represent her and once finished, offers a chipper, “Sorry to keep you,” to the awaiting officer. Some of this ‘golly-gee-whiz’ feels completely genuine, but there’s a performance to it that gets cut off once investigators begin knuckling down on their individual stories, especially when Detective Constable Emma Lancing (Kate O’Flynn) smells blood in the water and cleverly employs manipulation tactics to unsteady them and make them increasingly more defensive over time.

As with many great dramas, it’s in this shift that things begin to get cooking. As the Edwards become aware of the noose tightening around them and the police draw more and more conclusions, the events surrounding the murder and eventual coverup become a literal performance. Christopher’s composed account is told on a set piece fashioned after a pub draped in red and filled with extras, most of whom are donning full face masks. But as police begins to tie the various threads of the case together, the production shoe winds up on the other foot with Lancing leading both partner and suspects, performers all, onto the bedroom set and literally directs Patricia and William as she conveys what she believes likely happened the night of the murder. It’s an absorbing depiction of the way investigators and suspects vie to create scenarios (which, unfortunately, rarely ever pans out well for those who are innocent) that are most likely to be believed by a jury. Although I found Susan’s descent into her fictional cinematic interpretation of events to be a little overdone—the western sequence in the final episode feels a bit like padding for time—it does serve to remind viewers that despite the way the authorities take control of the narrative that the Edwards insist on, Landscapers is Susan and Christopher’s story, through and through.

Probably the least surprising feature of the series is just how good Colman and Thewlis are as the codependent couple. Colman, in particular, is sensational as people-pleaser Susan, whose trauma and loneliness is a natural fit for Christopher, a man who wants nothing more than to occupy the role of protector. Thewlis’ work is cut out for him here, playing a man who possesses misplaced arrogance and nebbishness in equal measure without him ever feeling like a joke. It’s hard not to feel touched by their relationship, despite the unhealthy nature of it all. They love one another desperately in the way that any two people who feel adrift in the world do, making them see one another through clouded lenses. Susan perceives Christopher as a brilliant man, her protector, when in reality he’s not half as clever as he thinks he is, at times possessing an almost shocking lack of self-awareness, whereas he sees her as a hapless victim of circumstance, a wan damsel in distress. Despite Christopher’s repeated insistence of her being “fragile,” when the notion is presented to Susan at her lowest point—especially in regards to her now-altered perception of her marriage—it’s then that we come to the realization that she’s made of sterner stuff, even if it’s awash in misery.

Some may object to Sharpe’s compassionate portrayal of the Edwards, though I feel compelled to point out that compassion is not exoneration. We can feel sorry for these two people and wish for justice to be done simultaneously. With so much of the focus on Susan and Christopher, this is much more of an actor’s showcase than it is a plot-driven drama, which could leave some viewers feeling underwhelmed. Although this would have been better served as a two-hour film, Sharpe’s vision and writing, along with fellow writer-creator Ed Sinclair (who is also Colman’s husband), present a sad tale of two wrong-doers separated by the law and their own unwillingness to concede to the truth.

Kaleena Rivera is the TV Editor for Pajiba. When she isn’t wondering if it’s even possible for Olivia Colman to give a less than stellar performance, she can be found on Twitter here.


← 'The Witcher' Season 2 Review: Netflix Brings On The Extended Witcherverse | The Last Golden Girl Goes To Her Rest: A Tribute to Betty White →