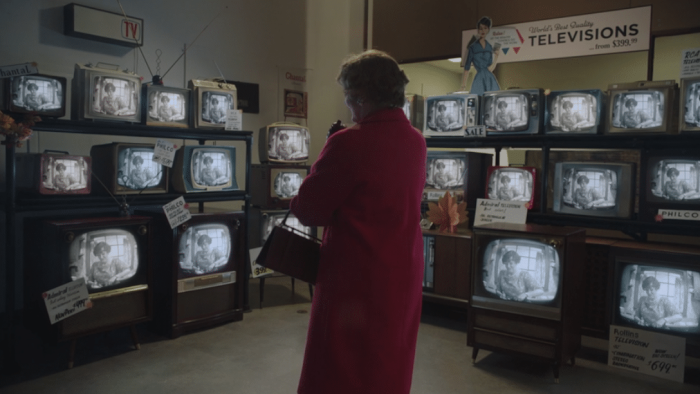 HBO's 'Julia' Is A Delicious Lesson in Determination

It’s almost impossible to watch HBOMax’s new show, Julia, without comparing Sarah Lancashire’s (Happy Valley) performance as the famous chef to Meryl Streep’s portrayal of her in Julie and Julia. Streep’s performance, as wonderful as it is, was more of an impersonation of Julia Child. This show is grounded in the un-glamourous reality of a middle-aged woman mired in self-doubt and fear as she attempts to carve out a place for herself on American television and in American homes.

Julia begins in Boston after Paul and Julia’s time in Europe has ended and “The Art Of French Cooking” has already been published. Paul, played by David Hyde Pierce (Frasier,) has retired from diplomatic service and spends his time in his studio painting. Julia works over the phone on her next book with Simone Beck (played in a brief appearance by Isabella Rossellini) in Paris. When Julia is invited on to the local Public Television show What Am I Reading to discuss her cookbook, she decides to do a demonstration and brings along a pan, mixing bowl, whisk, and a cartoon of eggs stashed in her purse. This shocks and charms the associate producer, Alice Naman (Fear The Walking Dead’s Brittany Bradford), and the studio executives are caught off guard by the unexpected popularity of her appearance on the show.

When Julia becomes determined to host her own cooking show, Alice quickly becomes her champion at the studio while all of the white, male executives cast doubts on the endeavor. Julia is too big, too ugly, her voice is too weird. Cooking is women’s work. Who would watch this show when they could be producing high-brow panel discussions about current events? The idea works its way all the way up to the president of the television station, Hunter Fox (Robert Joy, who you may know from CSI: NY or the million other roles he’s played over the course of his “Oh, it’s that guy!” career.) The Big Boss loves it; now it’s a go. Julia Child just needs to figure out how to make a TV show now, even though she’s never owned a television. 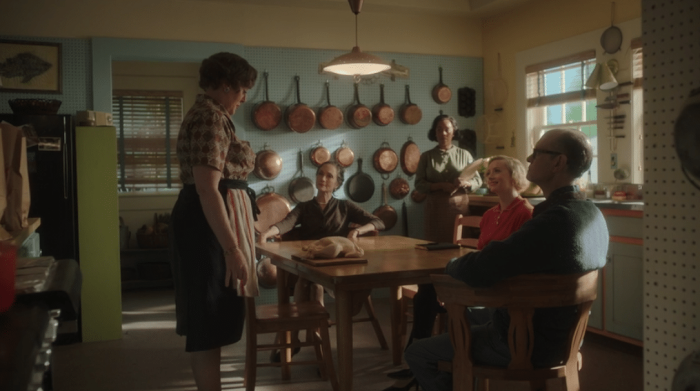 Over the first three episodes currently available to stream on HBO Max, there’s a great ensemble of actors cast as the real-life people who helped — and hindered — Julia’s career. Bebe Neuwirth is editor/reviewer/cook/family friend Avis DeVoto. In the Knopf offices, where Julia’s cookbooks were published, Fiona Glascott (young McGonagall in the Fantastic Beasts films) plays Judith Jones, an editor who nurtured Julia Child as well as many other famous chefs over the course of her 50+ year career, including James Beard. Judith Light (of Who’s The Boss fame) is the stately and tough-as-nails, chain-smoking Blanche Knopf.

Fran Kranz (Cabin In The Woods, Dollhouse) is the executive producer at the TV station who is reluctantly brought on to produce The French Chef. Despite all of his reservations, he is ultimately charmed by her recipes, going so far as to bring home a copy of her cookbook for his wife. James Cromwell shows up as Julia’s father, who disapproves of everything, from her marriage to Julia parading herself around on television. So undignified!

There’s a very strong juxtaposition of the men in Julia’s life who cast doubts on her abilities and the group of women she assembles who prop her up throughout the episodes. None of the men in her life believe in her—not even Paul, who has to be tricked into thinking that Julia having a show is HIS idea. Meanwhile, Julia has surrounded herself with women who not only see her value but are inspired by her to pursue their own goals. In the early ’60s, women having their own goals was kind of a new thing, remember. There were a lot of unhappy, under-stimulated housewives who benefited from Julia’s unconventional, unfussy, and sometimes unseemly public life. 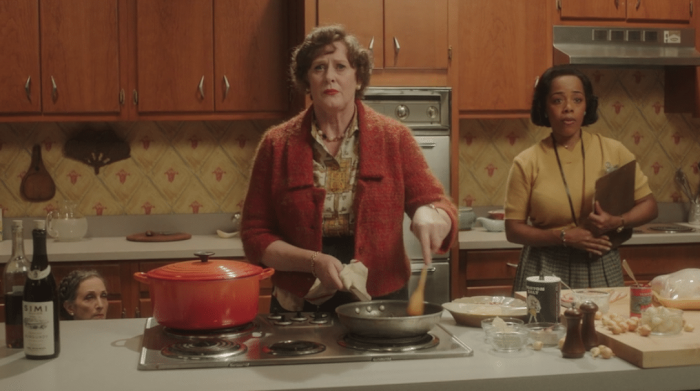 Lancashire brings a lot of pathos to the character of Julia Child. I don’t know if, in real life, Julia was this sad about never having children with Paul. She is portrayed as someone who is grieving as she begins to experience symptoms of menopause in the first episode. She presents herself with false bravado and self-assuredness in all of her meetings with the television production team, shielding herself behind beautiful plates of desserts, only dropping the facade in private conversation with Avis and Judith at various times. Even her sense of humor is used as a defense mechanism when necessary. She’s acutely aware of the reasons why the executives don’t think her show will be popular, going so far as to shame them for it a little bit:

“One of the advantages of looking like me is that you learn at a young age not to take no for an answer.”

Her fear and discomfort at being in front of the cameras for the pilot results in an episode that goes over like a lead balloon. But it also gifted us with the infamous line, “If you’re alone in the kitchen, who is going to see” when she sends a piece of raw chicken flying across the set.

This is a show about taking a leap of faith and faking it until you make it. Even when she wasn’t sure that she could pull off The French Chef, Julia threw all of her energy behind it and even financed part of the production when the TV station’s budget was presented as a challenge. 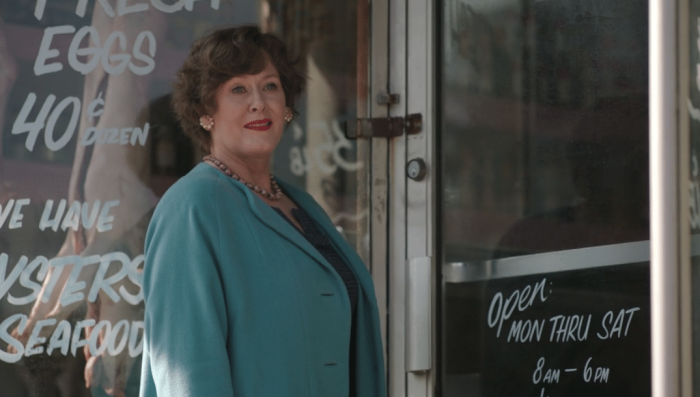 Overall, I think the performances here are strong and they’ve done a lovely job with costumes and set design. Sarah Lancashire is talented and expresses so much emotion with one look; it’s heartbreaking at times. She and David Hyde Pierce bring a lot of nuance to the private moments between Julia and Paul, so there’s some love story here too for those of you who need more than beautiful food to keep you interested.

The first three episodes of Julia are available now on HBOMax and new episodes are streaming on Thursdays.

← Hulu's 'Girl from Plainville' Has Nothing New to Say, but It Says It Well | The Daily Wire Announces It Will Take On Disney →