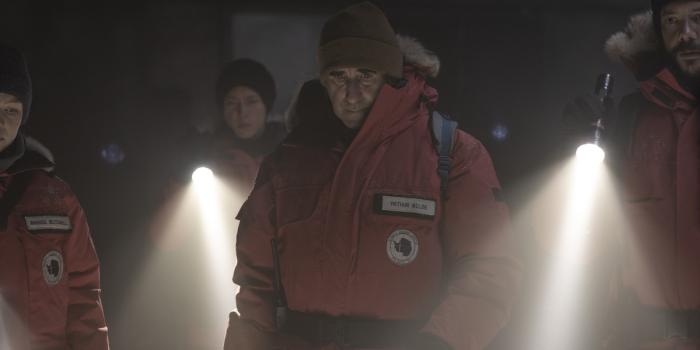 HBO Max's 'The Head' Review: Just Set Me Adrift on an Ice Floe

The trailer for HBO Max’s The Head sets up an interesting, if not entirely new, premise: over the course of Antarctica’s brutal and sunless winter, a small research team is holed up in a station as they continue their pressing work. However, once spring arrives and the relief crew flies in as planned, they are horrified to discover most of the team is either dead or missing. When a survivor turns up, the mysterious and violent events that occurred over that terrible winter are slowly revealed.

Comparisons to John Carpenter’s The Thing are inescapable—so much so that the show itself acknowledges it by having the team sit for a viewing party as a sort of ‘winter tradition’— but I will immediately disabuse you of the notion that there is any sort of creepy-crawly to be had here (aside from those of the human variety). This is a one-hundred percent whodunit, complete with misdirection and further questions in light of new evidence. Told mostly through flashbacks, the initial mystery is engaging. Unfortunately, that tension peters out early, leaving little more than an overly complicated mess trying to disguise itself as an intricate thriller.

With the season only being six episodes long, it’s easy to assume it’s in service of brisk, economic storytelling. By the time I got halfway through the season, however, I came to the realization that the roughly six hours allotted is probably still too much, as all of this could have been done in four or five. There’s a significant amount of background information distributed in that time, especially as things come to a head. Except, as it turns out, hardly any of it matters, not in terms of the mystery nor characterization. Aside from Commander Johan Berg (Alexandre Willaume), the lead investigator who is also desperately trying to locate his wife, fellow researcher Annika (Laura Bach), hardly anyone else’s motivation is fleshed out. Most of these people exist as alarmed set pieces, so much so that when we see how each meet their end, it’s surprisingly unmoving. And when they manage to do things that directly impact the plot, there’s little to no reasoning behind it. I found myself continuously asking “but why did X do X?” It’s this same absentmindedness that leads the series to also dole out various elements that also have absolutely no impact on the story—the show’s title itself being a perfect example of this—serving only as a talking point to ingest in the moment, never to be thought of again.

As far as the larger “who did it and why” goes, all the major questions are pretty much answered. However, it does little to allay the frustration felt at the dozen or so inadvertent questions that arise, especially in regards to survival and how the timeline works, since there isn’t enough material to fill out those six months (the flashbacks seem to take place over the course of a few weeks, max). The show’s conclusion fails to rise up and meet the tension that it so skillfully doled out in the first few episodes and features a last-minute reveal that actually elicited an “oh, come the FUCK ON” from me. And yet, the most disappointing facet has to be the writers’ half-hearted attempt at navigating gender inequality when it comes to the professional realm, especially in regards to scientific research. When presented with the opportunity to confront the ugliness of it, the writers make the infuriating decision to use it to service and uphold a man’s standing instead (this is purposefully vague as it’s a major plot point).

This show left me angry and frustrated, especially since there was some real potential there. Some people might be able to look past its faults and simply lean into the tension and thrills that it does manage to provide. Personally, I think the severity of its flaws is enough to advise you to figure out a better way to spend six hours, especially when you include the additional time and brainpower lost to figuring out all of its logical inconsistencies. And if you’re really, really hard up for a good thriller set in a frozen, isolated setting…well, John Carpenter’s The Thing is always available to rent.

The full season of The Head is available to stream on HBO Max.

Kaleena Rivera is a tv and film writer. When she isn’t checking out still shots of Álvaro Morte’s exposed forearms, she can be found on Twitter.

← Review: 'Sator' Will Reveal Itself When It's Ready | Impeachment #2 Open Thread →