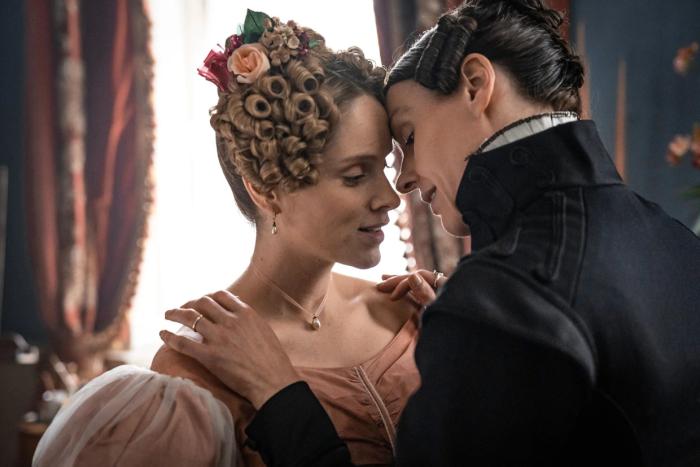 Rejoice, all ye fellow queers (and everyone else who likes good TV): Sally Wainwright’s still got it.
Wainwright’s prestige period drama Gentleman Jack wrapped its second season last week on the BBC with its customary measure of charm, wit, sex, and heart. Although Americans will have to wait for the final two episodes on HBO—sorry—it is extremely easy to see why the show remains so beloved.

Gentleman Jack is based on the diaries of Anne Lister, played by Suranne Jones, an upper-class gender-bender in 1830s Halifax. The historical Lister kept meticulous, encrypted journals (in a cypher she invented herself), and those diaries give a portrait of an endlessly fascinating person: an amateur doctor, an avid traveler and explorer, a brutal and shrewd businessperson, who existed in a time when the vocabulary to describe her gender identity was still nearly two centuries away.

In the show, Lister appears as a force of nature: out-talking, out-planning, and out-walking just about everyone who shuffles up to challenge her, all while wearing her customary top hat and skirted black suit. As in the first season, the show’s rendition of Lister is an exhilarating character study of an all-around remarkable person, at times brutally practical, always breathlessly kinetic, and frequently less-than-perfectly self-aware. In one scene, after firing a rude groom, Lister tells him to get off her property in twenty minutes or she will shoot him for trespassing—which leads to a half-frightening, half-humorous extended sequence in which she rushes through the passageways of her manor house with a loaded pistol, a detail which seems to slip her mind as she’s distracted by half a dozen other tasks.

The show’s brand of humor is finely honed and genially consistent, a patient, character-based comedy that relies on precise beats and timing: characters break the fourth wall to make exasperated eye contact with the camera, and the show develops a language of small, knowing gestures—signaling wordlessly for more wine at dinner, or a determinedly disapproving death-stare from a judgmental old neighbor.

Taking up more of a presence this season is Anne Walker (Sophie Rundle). In the first season, Walker appeared as a lovely but stifled object of affection and pursuit for Lister—not least because of Walker’s financial holdings. In season two, Walker is refreshingly alive, still tinged by shyness but far more self-possessed and in command of her own destiny, if still battered by a possessive and exploitative family. Walker is Lister’s wife in all but name: what they have is “as good as a marriage,” as they both insist repeatedly. They give each other as many legal protections as possible, fashioning a binding partnership while maintaining the—unconvincing—pretense of being two respectable, landed social companions.

If season one was about Lister’s pursuit of both Walker and social status, then season two is about the couple carving out a place for themselves to be happy and secure in their unorthodox marriage. That means confronting Lister’s former flame and festering feelings, Walker’s almost unbelievably patronizing and awful extended family (except, well, it is the 1830s), and financial and social traps in Halifax.

The show is remarkable for the materiality and unglamorousness of how it depicts the lives of these historical women—a depiction facilitated by the thoroughness of Lister’s journals, in which she recorded everything from atmospheric pressure to the time it took her to walk from one part of Halifax to another. That means a precise accounting of money, and the show’s emphasis on financial wellbeing and management is startlingly refreshing. It’s a reminder of real people, living real lives embedded in economic systems and changing markets. And rather than boring the pants off an audience, Lister’s aggressive and astute accounting is another lively aspect of her commanding character study. Even if you can’t exactly keep up with the figures being thrown around shadowy Halifax accounting offices, the tone and force of Lister’s persona comes through crystal clear.

The financial battles are part and parcel of Lister and Walker’s struggles to assert themselves as a legitimate, established couple—to themselves as well as to others—as Walker’s family picks apart at what is rightfully hers. The couple lives a shared life built on love and confidence, rather than law, and in such a rich character portrayal, that continual threat and precariousness makes already fascinating people even more absorbing.

What makes this portrayal of a powerful queer woman so rewarding to watch? For one: she isn’t a purely inspirational archetype. Lister retains her complexity. Her force of will is as much a stumbling block in her private and public life as it is an advantage. I’m personally pretty tired of Milk-esque storytelling, the heroic oppressed queer figure who rises above it all. Lister does “rise above it,” as she writes famously in her diary. But she’s also silly, aggravating, and often has all the subtlety of a locomotive. We know who we’re rooting for, but Gentleman Jack isn’t inspo-porn of the heroic, historical queer icon overlooked by history. Rather, it’s a tremendous and complicated character study that has lost none of its heart, charm, or momentum in stretching to a second season.