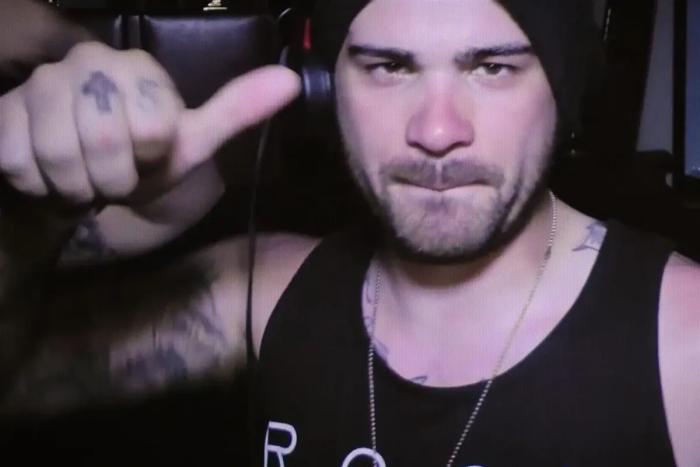 Gather 'Round and Laugh at Dumbass Grifter Hunter Moore, 'The Most Hated Man on the Internet'

While Moore claimed all the photos were submitted to his site by vengeful exes and he was just platforming (so he didn’t feel bad at all), what he was actually doing was paying a hacker to steal intimate photos from women and men’s phones and computers. And as icing on the shit-cake, Moore cheerfully linked the victims’ social media and personal details to these nude images and egged on his little cult of Twitter losers (who also enjoyed lighting their pubic hair on fire and punching strangers when Moore dared them to) to “destroy” these “[derogatory expletive of your choice].” (Whatever it is, it was used at some point).

The website destroyed lives, driving one victim to attempt suicide and many others to completely withdraw from the world. A kindergarten teacher was kicked out of her classroom with no idea that she’d been hacked or posted on the site. One sex worker, who actually did submit her photos intentionally to the site for some free publicity, discovered that Moore had linked her Facebook profile—complete with images of her two small children—to her porn. When she asked Moore to take the images of her children down, he proceeded to exploit her for months for further explicit content to the point where she lost custody of her children.

I was highly apprehensive about setting out on this true crime saga. My real fear was that Netflix had actually paid this asshole to make an appearance in the doc or that they would reproduce these stolen images for millions to absorb. Thankfully, they didn’t. The images shown, the show states clearly, are not the images from the site but rather images shared with consent to mimic the appearance of the site. Moore does not get a word in edgewise (finally). The Most Hated Man on the Internet is instead a 3-hour payback saga as folks stand up to Moore and eventually take him down.

The hero of this story is Charlotte Laws, the mother of one of Moore’s myriad victims. Charlotte Laws is the kind of person who made a name in the ’80s and ’90s talking her way into celebrity parties and VIP events, then going on talk shows about it. That is to say, she isn’t someone who’s easily dissuaded. Laws, by the 2010s, was a mother with a profound bond with her daughter—such that when her daughter’s stolen intimate photos were posted on IsAnyoneUp, Charlotte was the first person her daughter called.

What follows is a frightening and ultimately cathartic crusade by Charlotte against Moore, a campaign that draws in reporters from The Village Voice (whose headquarters he said he’d burn down) and Rolling Stone, an ex-Marine, and the full force of Anonymous, the FBI, and Anderson Cooper. Throughout, Charlotte is unstoppable. Death threats mount. The police essentially laugh her off. And she continues to do the investigative work that ultimately lights the fuse which burns Moore to the ground.

The Most Hated Man on the Internet is about a dark time in the naissance of widespread internet usage, about the trolls who erupted from the “scene” of the aughts with the baffling idea that they were beyond society’s control … because they’d chosen obedience to a cult instead. They wield the internet and its lack of regulation as a weapon. Interviewees—including an FBI agent trying to investigate and prosecute these crimes—repeatedly emphasize that there were no legal protections at that time against terrorizing people online with nonconsensual intimate images. Platforms not generally being responsible for the content they host is still a major tenant of law that allows sites like YouTube and Twitter to continue to function, where copyright law doesn’t rear its head and cause content removal.

But the show is also a frank look at the easy misogyny of these trolls and their gleeful free reign on the internet: their ugly, frivolous destruction in the name of a leader looking for his next grift. It’s a frank, direct condemnation of the kind of herd mentality that drives people to champion assholes who think they’re above repercussions because they simply don’t give a shit. And it all unfolds about four years before the 2016 election. Do with that what you will.

This three-episode true-crime series is part social crusade—raising awareness of the scope of this kind of crime and its impact—as well as a lovely jaunt through Moore’s dumbass downfall and a chance to offer this asshole all the disdain he deserves. The docuseries does its job in terms of telling the story, but hopefully it will also do its job in ensuring that Moore remains the laughingstock he’s made of himself.

Naturally, Moore is now back on Twitter saying how 60% of the documentary is BS and the media doesn’t want you to know the truth. It sounds like the familiar refrain of a cornered man-child who’s exactly as pathetic as he seems.


← The Kind of Friends You Should Have By Age 30 | Review: Gen Z Takes A Beating From The Whodunit Hands of A24's 'Bodies Bodies Bodies' →