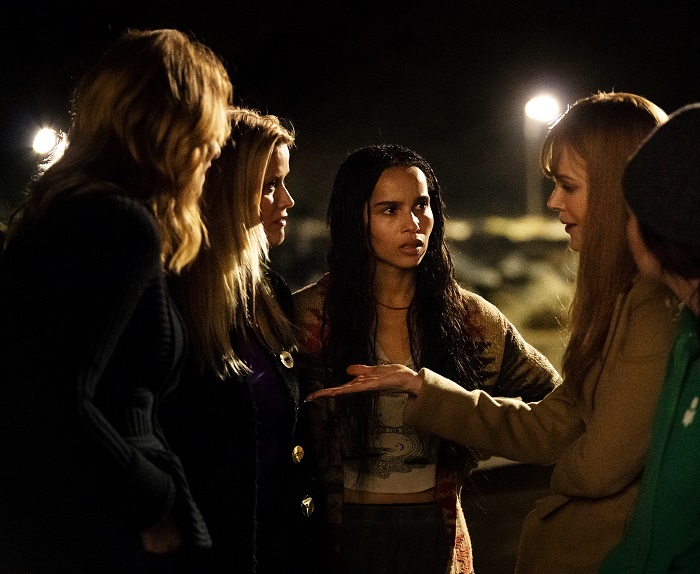 The second season of Big Little Lies wraps this upcoming Sunday, July 21, and I think we can safely assume this is the end of the series. I mean, I hope so! Stories can end! But also, we’ve heard as much from the HBO executive Casey Bloys. From a piece over at TVLine:

“I love this group of people - I would do anything with them,” HBO president Casey Bloys maintained to TVLine earlier this year when asked about Big Little Lies’ renewal prospects. “But the reality is, they are some of the busiest actresses working in Hollywood. We have deals with some of them — Nicole [Kidman] is doing her next show [The Undoing] with us. I just think it’s not realistic.

“Look, if they all came to me and said, ‘We worked out all of our schedules!’ - then sure,” Bloys added with a laugh. “But I just don’t think it’s realistic.”

Does this sync up a bit with what we anticipated from the ending of last week’s penultimate episode, “The Bad Mother,” in which Celeste asked the family court judge to let her question her mother-in-law Mary Louise? It sure does! Ever since it was revealed this season that Perry had a brother who died under somewhat mysterious circumstances, and ever since Mary Louise told Celeste that the death led to her divorce from her husband, who bounced out of Perry’s life, we knew it would come up again. We knew it. David E. Kelley is too soapy of a storyteller to drop in a nugget like that and just walk away from it.

But what else can we expect from “I Want to Know”? I have a few questions, and I’ll share them with you here. I have absolutely zero guarantee that any of this will happen, so if this all turns out wrong, oh well! Although I do receive advance episodes for these recaps, I haven’t gotten the one for “I Want to Know” yet, and sometimes HBO doesn’t make those screeners available for season or series finales (it didn’t for Sharp Objects). I’m going in just as blind as anyone else. Let’s pontificate!

SOME SPOILERS FROM SEASONS ONE AND TWO OF BIG LITTLE LIES AND THE NOVEL UPON WHICH IT IS BASED FOLLOW, FYI 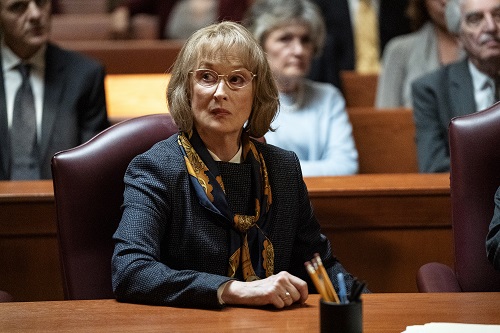 + Was Perry responsible for his brother’s death? In the book version of Big Little Lies by Liane Moriarty, we learn that Perry would use his cousin’s name, Saxon Banks, when he was up to no good. In the show, we know that it was Perry’s brother Raymond who died when he was 5 years old, and that his death is what broke apart the family. What was Raymond’s cause of death? If it was a car accident, was Mary Louise driving the car? If it was some sort of neglect — like Mary Louise went somewhere and left the boys alone, and something happened that killed Raymond — was she held responsible? There is something here that caused the dissolution of the family and the overwhelmingly toxic bond we see Mary Louise had with Perry, and if it exists, I think Celeste gets it out of Mary Louise, and I can’t imagine an outcome for this show in which Mary Louise actually gains custody of Josh and Max over Celeste. I don’t think this show is that bleak.

+ What if Corey IS ACTUALLY a cop? I’ve seen some theories floating around that claim Jane’s aquarium coworker and potential love interest Corey is actually Perry’s half-brother OR another son of his, but I can’t see either of those things coming true. Perry did not spread his junk all over all of Monterey! I mean, I am assuming he didn’t! That storytelling would be too convenient! What I’m more curious about is whether Corey is actually a cop, because although we see him tell Jane that he was pulled in for questioning by Detective Quinlan, why did she only go after him?

Maybe he is actually a police officer, or, an informant of some kind, despite his insistence to Jane that he’s not. I understand that spouses are protected by certain privileges, but why not target any of the husbands? Nathan, Gordon, and Ed have all voiced that they sense something different about their wives since Perry’s death. And for Gordon in particular, why not bring him in and offer him some kind of deal if he shares what has been going on with Renata? The show suggested that Detective Quinlan helped engineer his arrest by the FBI; why not throw her weight around here in another way?

+ Is Bonnie done confessing? My greatest frustration with this season is how it has stretched out what was a tidy ending for Moriarty’s novel into a season-long mystery about Who pushed Perry Wright? when we all KNOW who pushed Perry Wright. I sincerely believe this season would have been stronger if the investigation wrapped up within the first episode or two and THEN the drama with Mary Louise started, because she was still hellbent on having custody of those kids, irrespective of what her son did. That would have worked better for me — we could have still had these character explorations, still go into Madeline’s and Ed’s problematic marriage, still bring in Renata facing bankrupcty, but make those subplots the primary details of these women’s lives, not just that they’re covering up what should clearly be a self-defense case. I don’t get it! 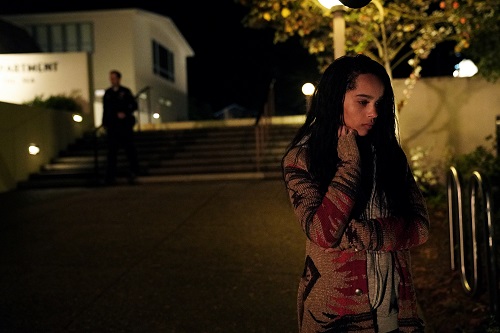 But anyway, back to Bonnie: We saw in “The Bad Mother” that Bonnie came clean to her mother Elizabeth about how her years of emotional and physical abuse shaped Bonnie into a woman who is driven by self-hate and resentment, and there was a suggestion of Bonnie admitting that she doesn’t love her husband Nathan, or at least isn’t fulfilled by their marriage. In addition, we got some fakeout scenes during Celeste’s testimony that depicted Bonnie standing up in court to confess something. Do we think she’ll come clean to Detective Quinlan? Honestly, I could see this going either way. I think on the one hand, this second season has demonstrated that Elizabeth was one of the primary drivers of Bonnie’s life, and calling her on her shit seemed pretty integral to Bonnie’s identity. But on the other hand, we’ve seen that Madeline still doesn’t trust Bonnie, and Bonnie’s had a lot of dialogue this season about “the lie” and how it’s going to destroy everyone. So this is a toss-up for me! But if Bonnie DOES tell the truth, I’m curious about how the show will handle the ripple effects of that — would Celeste then have perjured herself, because she said during Ira’s questioning that Perry slipped? Or, could Celeste claim that she didn’t see what actually happened, and she didn’t know that Bonnie had pushed Perry? I don’t know! As I mentioned in my recap for Sunday, I don’t think we’ve seen Bonnie and Celeste have a one-on-one conversation alone yet this season, but I would hope that if Bonnie does confess, we at least see that exchange first. 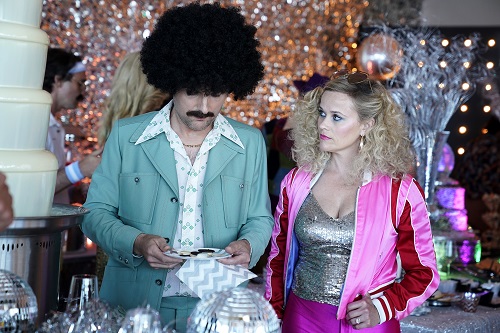 + Does Ed cheat on Madeline, and if so, does it matter? I’ve been low-key irritated that the last two episodes of the season have devoted a not-insignificant amount of screen time to Ed and his flirtations? dalliances? with Tori, the wife of Theater Director Guy who Madeline cheated with. From the very beginning of this season, when Ed sees Tori in the grocery store after her breast-enhancement surgery, it’s been clear the show is building toward something. Is it Ed getting revenge on Madeline for years of feeling insignificant by sleeping with Tori? I mean … I guess that could happen? It’s certainly something that would probably drive Madeline crazy, and also push Ed down toward the scumbag levels that Nathan seemed to occupy before he and Madeline got divorced, and I don’t know what it would actually contribute to this story. Is it just another way for the show to further it’s “No man can be trusted” agenda? (Don’t get me wrong, I’m MISANDRY ALL THE WAY, but I’m not sure this show needs that from Ed.) If Ed DOES cheat, does it rattle Madeline so fully that she asks for a divorce, finally pushing her character forward as a solo player? I’m not sure!

+ What songs are part of the finale? As a reminder, for the season one finale “You Get What You Need,” we were heavy on the Elvis because of the themed school fundraiser: “It’s Now or Never,” “Treat Me Nice,” Conor O’Brien’s version of “The Wonder of You,” and Zoë Kravitz’s cover of “Don’t,” plus Ituana’s cover of “You Can’t Always Get What You Want,” Daniel Agee’s “How’s the World Treating You,” Crosby Still Nash and Young’s “Hopeless,” and Agnes Obel’s “September Song.” I’m embedding Neil Young here because I like him and you can’t stop me!

+ And finally: Will Renata ever be rich again?! I leave you with my favorite gif from this season.

And my favorite outfit: 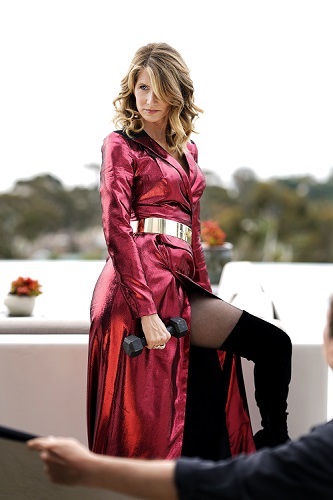 Your turn! What are your predictions for how Big Little Lies wraps up? Meet me in the comments!