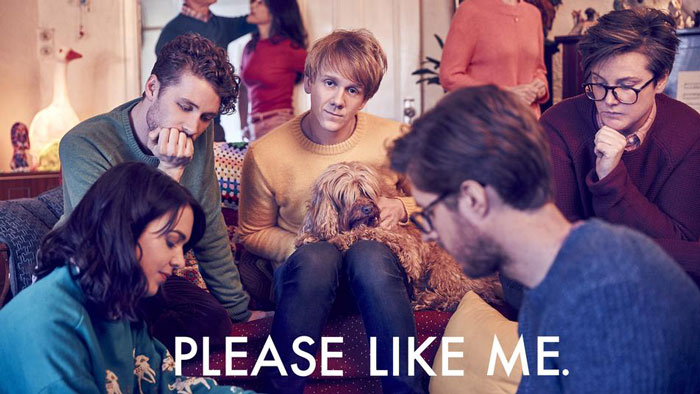 Last week I discovered the joys of Josh Thomas’s bittersweet and bright Everything’s Gonna Be Okay. However, as only three episodes are currently on HULU, I was frustrated by hitting a wall of wanting more and having to wait for a new ep to air. Thankfully, this isn’t Thomas’s first dive into the complicated comedy of growing up. Under Hulu’s recommendations, the streaming service for once suggested something actually relevant instead of Family Guy and South Park, shows which I haven’t watched voluntarily in years. Hulu offered Thomas’s Australian precursor Please Like Me (2013-2016), which plays as a perfect sister series to Everything’s Gonna Be Okay.

Beyond both being created by Thomas, the two have very similar DNA. Both series star the affable Aussie as a twenty-something gay man trying his best to care for his family in the face of trauma and tragedy. In Everything’s Gonna Be Okay, Nicholas (Thomas) parents his orphaned half-sisters following the death of their shared father. In Please Like Me, Josh (Thomas) is the chief caretaker for his bipolar mother, who is struggling with suicidal thoughts in the wake of her divorce. Yet despite these deeply dark setups, each series strives to find the funny through observational humor, awkward moments, and defiant exuberance. Each also features a lovable family dog, a very hot and deeply game boyfriend for its male lead, and cathartic moments given oomph by pop music, like dancing to the thwart grief of losing a father or singing Adele to pay tribute to a beloved rooster.

Finally, the episodes of each series tie to the personal passion of its central protagonist. In Everything’s Gonna Be Okay, Nicholas is an entomologist, who keeps beetles and tarantulas in terrariums. As such, the first three episodes boasted names like “Seven-Spotted Ladybug,” “Greenbottle Blue Tarantula,” and “Giant Asian Mantises,” referring to a bug that proved a prop in a pivotal moment for one of its heroes. In Please Like Me, Josh is a dedicated foodie, so every ep has a culinary name, like “Beluga Caviar,” “Truffled Mac and Cheese,” and “Burrito Bowl.” Once more, the title ties to a key scene, in this case where food is the grounding prop in a moment of remembrance, joy, or devastation.

The major difference between the two series is the protagonist’s starting point in his adulting journey. Everything’s Gonna Be Okay introduces Nicholas as an out-and-proud young man who has a vocation in entomology and a plan for his future with a job awaiting him back in Australia, which is derailed when he learns of his father’s terminal cancer diagnosis. So, the series focuses (so far) on Nicholas learning to be a parent to his half-sisters. As such, Please Like Me could be viewed almost like a spiritual prequel, as its characters aren’t nearly as far along in figuring out adulthood.

We also witness this young man, who is long coddled by his father’s money and his friends’ devotion, learn to stand on his own through discovering a vocation and a sense of autonomy. Along the way, there are hijinks and heartbreak, frustrations and friendship, and an awe-inspiring array of scenes that feel sitcom savvy while being breathtakingly authentic. The show manages to weave humor into taboo topics like suicide, HIV testing, rape, and abortion, while never mocking the potential trauma of these moments. There’s a frankness to their depictions, but also a refusal to give in to the bleakness of it all. So, when Nannette’s Hannah Gadsby shows up to play a bestie to Josh’s mom, it seems just right. She blends perfectly into this warm world of smart yet struggling characters, who are so charming and familiar you just want to hang out with them on and on, snacking and snarking. My only complaint about this series is that it ended, and with a cruel abruptness that left me wanting more. Thankfully, there’s Everything’s Gonna Be Okay for that.

Whether its an argument about bread, an emotionally fraught first-time, or a bumbling yet beautiful sing-along, Josh Thomas finds humor in the moments of life where we are so fragile we fear we might break into a million little shards, never to be repaired. Sometimes the characters do break, and so do we - into giggles, into smirking laughter, or ruthless guffaws, or into tears. Within his shows, Thomas recognizes the deep well of sadness that swells within the human heart and reflects his comedy from it, exploring the awkward social interactions, messy arguments, and abrupt moments of bliss that feel like miracles.