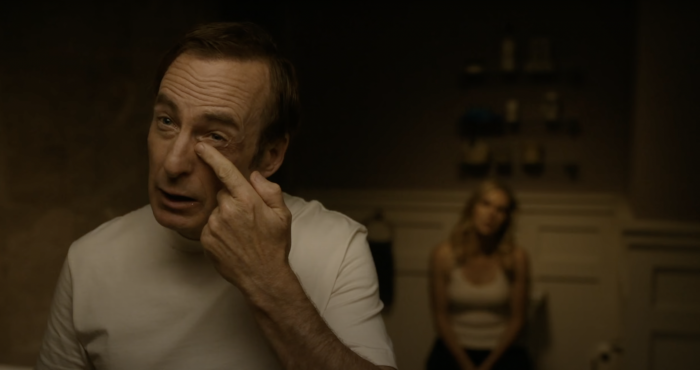 As the saying goes, “just because you’re paranoid doesn’t mean they’re not out to get you.” Peace has never been in ample supply in the world of Better Call Saul, but with Lalo’s whereabouts still unknown, it’s impossible not to be on edge. Kim, whose desire to feel an ounce of security against Lalo coming back is only outweighed by her need to protect Jimmy from the knowledge that he’s alive. Meanwhile, Gus is a man who’s rapidly fraying around the edges, on the verge of becoming unhinged. This isn’t the calm, collected man we came to know so well on Breaking Bad, and it’s hard to tell which version of him is more unsettling to be around.

Much like Jimmy, Howard has been able to reside in a similar state of blissful ignorance, unaware of the danger that’s being posed to his livelihood. That is, until Cliff Main finally confronts him. Though Howard doesn’t know the extent of Kim’s involvement in the scheme, he immediately wisens up to the fact that Jimmy’s behind it. Unfortunately for Howard, even if Jimmy and Kim’s scheme ultimately fails, the damage to his reputation is almost certainly permanent. No matter what sort of defense Howard comes up with, unless he displays incontrovertible proof that it’s all a smear campaign, Cliff is only capable of suspicion thanks to his unfortunate personal experience with addictive behavior. Despite the direness of the situation, Howard canceling his work engagements for a week seems rather extreme until we discover exactly how he plans on confronting Jimmy: a good old-fashioned boxing match.

Though it’s easy to assume that neither Howard nor Jimmy have much in the way of pugilistic expertise, it’s hard to convey exactly how deeply awkward it is to see these two middle-aged men engage in such a gawky display of masculinity as a means of hashing out their resentment for one another. It’s especially groan-worthy seeing Jimmy, who initially laughed off the prospect of getting in the ring only to agree for who knows what reason, prance and crow like a fool. Unsurprisingly, Jimmy gets his clock cleaned (his fast-talking ways probably got him out of scrapes 95% of the time and Howard’s in damn good shape) with a one-two combo of a punch to the gut and a well-placed uppercut. Both men know this isn’t the end of it, however. Howard’s hired a P.I. to keep tabs on Jimmy, while Jimmy, now sporting an unprofessional, though admittedly tough-looking, bruise on his face, steels himself for the next step. It seems we were wrong to assume that character assassination was the end game, thanks to Kim’s cryptic, “Because you know what’s coming next,” to Jimmy.

It’s unlikely we’ll find out just what it is before the upcoming midseason break, much to my sadness, but at least we see the return of Francesca (Tina Parker). Jimmy’s certainly happy to see her, though the feeling isn’t really mutual. “Where’s Ms. Wexler?” she asks almost immediately upon arriving, and you can almost feel her bewilderment at the news of their marriage. Between the shoddy office space and an even rougher clientele, Francesca is half out the door until Jimmy ponies up more pay, along with some say in the decor. I imagine the office that we know so well from Breaking Bad will take quite some time to be fully realized—though I imagine Francesca’s bulletproof glass goes up sooner rather than later—but if I was a betting woman, I’d say there’s a good chance we’ll see how Jimmy acquires the oh-so recognizable Statue of Liberty inflatable statue we’ll later see on the roof.

It’s a day for meeting up with former employees, it seems. Kim has arranged a pleasant sit down with Viola (Keiko Agena) to catch up and offer a chance to explain her abrupt departure from Schweikart & Cokely. It has all the appearances of being nothing more than a social visit until Kim steers the conversation towards who’ll be overseeing the mediation process. Once Viola gives up a name, Rand Casimiro, a glint appears in Kim’s eye. How this Casimiro fellow will fit in their plot is still unknown, though the mechanics of it will probably involve Jimmy playing dress up once again—when Kim and Jimmy talk in the bathroom later that night after the fight, Kim shows a picture she found of Casimiro (Jimmy, on his substantial handlebar mustache: “That’s a lot less face to cover.”). This scheme of theirs seems to grow more intricate, not to mention theatrical, with every hour. It’s a fact that Kim undoubtedly luxuriates in; her criminal mischievousness is aimed at ‘The Man,’ while she reserves the majority of her goodwill towards underserved populations. “Sometimes I question all of it,” Viola tells her, completely unaware of the unethical lengths Kim is going to in order to make all of this happen. “But you make me feel better about the law.” At this point, I don’t see how Kim Wexler manages to not be disbarred by the series’ end, and the disappointment of decent associates like Viola is going to be almost as painful to watch.

But that’s a hurt that may or may not come in the future. For now, it’s enough that we revisit the fallout from the finale of season four when Mike was forced to kill poor Werner Ziegler. It seemed unlikely we’d come around to that storyline again, but when the camera centers on a lovely middle-aged woman sitting alone in a German bar, it’s obvious that the woman is Margarethe (Andrea Sooch), Werner’s beloved wife. The real surprise happens later, however, when a movie star-handsome American sidles up to the bar and orders a martini. The mystery of where Lalo’s been is now solved. Seeing the newly-widowed Margarethe confide in this villain is tense enough, but after she turns down the chance to invite him in, not yet ready to take on a lover so soon after the death of her husband, seeing him break into her house is dreadful, especially when she unexpectedly returns home. Her death, upsetting as it would have been, seemed almost assured. I harbor no belief that Lalo found it easier to slip away through that small, inconveniently placed window rather than shoot the Widow Ziegler and pose it as a home invasion gone wrong. Why he didn’t kill her is yet another mystery—perhaps a rare moment of compassion? Unlikely, but still—and one that will surely go unsolved. Whatever it may be, it was a relief to have Margarethe still alive when the credits finally rolled.

Amazingly, there’s only two episodes left before the midseason break, a fact I find both relieving and maddening. On one hand, I’m thankful there’s more Better Call Saul to look forward to, but on the other, it means that whatever fireworks happen in the next two episodes (and with two relatively quiet episodes preceding it, means it will certainly be explosive), will take almost two months to understand the full breadth of the repercussions. Will Lalo and Gus’ long-awaited showdown finally happen? Especially now we know Gus finally has some sort of plan to deal with him. We know Gus makes it out alive (and Lalo, well, presumably not) but the tension lies in how exactly it’s all going to play out, which is a testament to Peter Gould and Vince Gilligan’s ingeniousness. Before that, however, it’s likely that Lalo will wreak more havoc, presumably on the unsuspecting young men who worked with Werner, the “Junge” inscribed so beautifully on that slide ruler memento that Lalo studied so intently before the episode’s closing.

Kaleena Rivera is the TV Editor for Pajiba. When she isn’t digging into the details of that boxing scene (fun fact: Patrick Fabian was trained by Luis Moncada, best known as one of the Salamanca twins), she can be found on Twitter here.