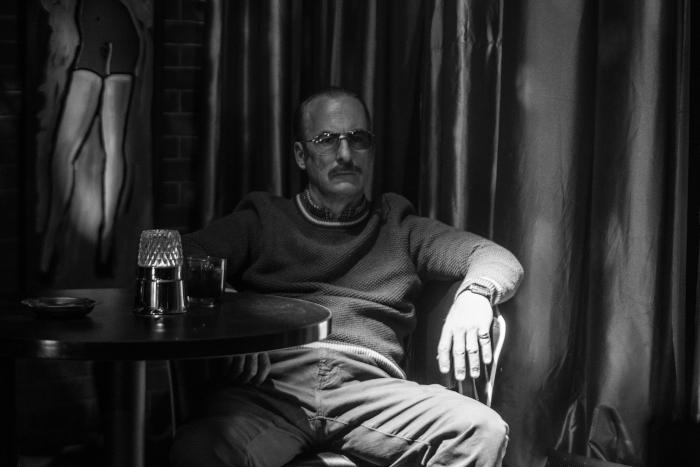 At long last the window of time between the Saul Goodman era and the Gene Takovic period has narrowed. All it takes is one look at a colorized Saul yelling, “¡Yo soy abogado!” in the back of a moving vehicle to tell us exactly what incident we’ve come upon in media res. Though the memory of just how Saul Goodman became Walter White and Jesse Pinkman’s lawyer—a character first introduced in the second season episode titled “Better Call Saul” for those keeping track of the tidy parallels between the two series—is a notable one for Breaking Bad fans, the journey through Better Call Saul has enhanced our perspective on the proceedings considerably, from who Lalo is (just because the man is gone doesn’t mean he can’t continue wreaking havoc in death) to the surprisingly emotional origin of “put a dollar in my pocket.” Years later yet Kim’s influence on Saul remains.

This should surprise no one; we’ve long assumed that Kim’s absence would be the major fault line in the shifting plates of Saul’s life. But when Gene finds out from Francesca that Kim made contact, his wonderstruck, “She asked about me?” makes it clear that Kim is never far from his mind despite the amount of time that’s passed since their all-too sad breakup. We’re no closer to closure, either, considering the daring decision to show Gene conduct a screaming match on the payphone sans audio, leaving it a mystery as to whether or not it was even Kim on the other end of the line.

Whatever the details of that conversation may have been, it’s enough to send Gene, already long weary of his brief stint as a law-abiding Cinnabon manager, down a darker version of the well-trod path he normally takes, i.e., playing the role of confidence man, whenever life doles up a serving of pain. But his increasing anger and resentment is causing the Slippin’ Jimmy persona to fray around the edges a bit, starting first with his abrupt treatment of Marion; her sitting alone at that kitchen table reminded me all too much of when Jimmy accepted Irene’s broken heart as acceptable collateral (for a time, at least) during his first major swing at the Sandpiper settlement. But unlike Irene, Marion has teeth, and it will be interesting to see if her growing suspicion comes back to bite Gene on the ass.

The bigger indicator of Slippin’ Jimmy’s downward spiral has to do with the specifics of the con itself. With Gisele, Viktor isn’t much of a menace beyond the large bar bill and at least one occurrence of law-related chicanery (the Mesa Verde blueprint), but Viktor on his own, motivated by little more than an addict’s desire to self-medicate, is a hazard. I doubt even during his seediest dealings with Marco that either man ever went low enough to drug and rob marks blind. Of course the term “robbery” is inadequate to describe the outcome of Gene’s scheme, as it’s almost certain that the photos Buddy (Max Bickelhaup) takes of each man’s credit cards and other documents are distributed among identity thieves, a scenario infinitely worse than simply losing out on a few hundred dollars in an isolated incident. It’s as lucrative as it is distasteful, and soon Gene’s socking away whatever he doesn’t spend on sex workers and toys from Saul Goodman’s heyday.

Little ever goes to plan for long, however. It’s one thing for Buddy to refuse to rip off a mark that’s dealing with cancer and quite another for Gene to return back to the scene of a crime in mid-progress. But this series, indeed, the whole Breaking Bad universe, often hinges on people being incapable of leaving well enough alone. Nevermind that even Gene himself felt sympathy for this man while he sat next him—the old Jimmy McGill shining through, because despite his love of a shortcut he was capable of an immense amount of empathy. But as far the new Gene Takovic goes, sob story or not, he means to see this through. Jeffie, keen on maintaining his newfound lifestyle, even if it amounts to nothing more than just being a toady (Pat Healy’s substitute casting may have felt abrupt but the pathetic quality he brings to Jeff is absolutely paying off), is still willing to help, though even he’s smart enough to know it’s far from the brightest idea they’ve ever had.

Why feel bad for a man with cancer? Gene knows better than most that a cancer diagnosis doesn’t preclude someone from being a bad person. In fact, one of the greatest monsters he’s ever encountered happened to be a man battling a cancer diagnosis. But the takeaway from the Walt and Jesse cameo (neither Bryan Cranston or Aaron Paul feel like they’ve skipped a beat despite how long it’s been since they occupied either role; the fact that they’ve aged is apparent though it’s one I found easy to overlook) isn’t that a desperate high school chemistry teacher became a monster, it’s that Saul Goodman had a hand in that monster’s creation. Left to his own devices, Walter White would still be the architect of his own destruction, but the far-reaching nature of that destruction is at least partially at the hand of Saul and his willingness to mold “170 pounds of clay” simply for the sake of making money.

Now jump forward a few years later and his current aim is to once again profit off of a sick man, only this time it will be in a way that won’t benefit that man in the slightest. As the seasons have led us closer and closer to the end of the series, it’s been tempting to imagine how Saul may eventually find his way to something resembling redemption. But now that we’re here, it’s becoming increasingly more obvious there’s little chance of anything going right for him, especially since judging by the promo for next week, this criminal detour he’s on is about to go very wrong.

Kaleena Rivera is the TV Editor for Pajiba. When she isn’t breaking her head trying to figure out when mark #1 looked so familiar (answer: Devin Ratray famously played Buzz McCallister in Home Alone, though he’s appeared in a number of projects since), she can be found on Twitter here.