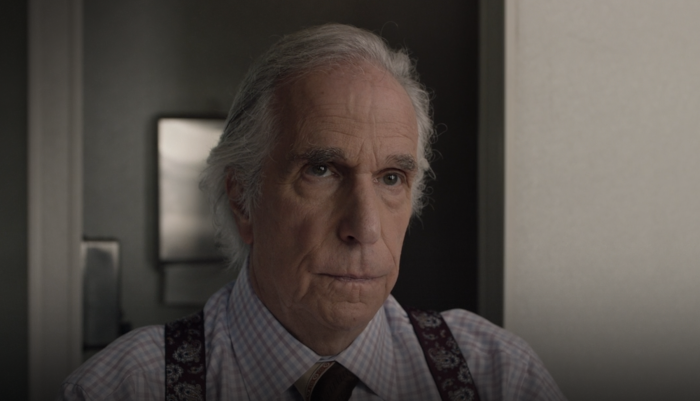 (spoilers for season 3, episode 3)
In film and television, vengeance is often depicted in a cool or righteous light, as opposed to something largely empty of meaning or utility. This week on Barry, we see multiple revenge plots begin to emerge, and despite best efforts to stop them, there seems to be little anyone can do to halt the oncoming flames of greed, fury, and violence, despite the immense cost that will inevitably be paid.

Barry’s terrible path to redemption has Gene over a barrel, even if he wouldn’t imagine their ‘arrangement’ in those terms. He’s all too happy with the way things are shaping up, to the point that he finds Gene’s lack of gratitude rather dismaying (“Look, we’ve both done terrible things in our lives, but we’re helping each other make up for it. You know? I mean…you’ve got a line. You’re welcome.”). Gene, however, is quietly living a nightmare, his mind mostly on Leo and his grandson, though we’re provided a brief moment of comic relief when a former PA turned showrunner calls Gene out on the time he threw hot tea in his face after a slightly bungled breakfast order. Gene, who’s better known for his historic ill-treatment of various cast and crew over the years than he is for his acting prowess, struggles to remember the incident.

At the plant nursery, the Chechens are surveying the damage from the Bolivians’ retaliation, and NoHo Hank tries to pass off the bullet-riddled damage as nothing more than the work of “neighborhood kids being chodes.” Rather than risk anything happening to Cristobál, Hank decides to deploy “The Patsy,” which has been the entire reason for keeping Fuches housed in Chechnya. Fuches, who’s looking much better than he did when we first looked in on him in the premiere, seems to have settled in nicely. Too nicely, actually. It seems that the life of a goat herder beats out watching college football on TV (also comes with bonus shepherd’s crook). So when Hank calls to say he’s clear to return to the U.S. he’s not keen on the prospect. But at the first mention of Barry’s name, Fuches outright blanches. As far as he’s concerned, coming back isn’t a remote possibility. There’s too much to live for and for the moment, Fuches is choosing life. Hank’s ace in the hole is a bust, and he’ll have to come up with another way to prevent the growing war between the Bolivians and Chechens.

It’s the day of Sally’s big press junket for Joplin, and co-creators Bill Hader and Alec Berg have zero hesitation showing how soul-sucking the process can be—I actually flinched at the, “Who do you think should be the next Spider-Man?” question, as it reminded me of far too many real life interviewers that fish for soundbites and clicks by steering the conversation towards comic book films. “I’ve never answered the same questions so many times in my whole life,” Sally groans, now learning firsthand how mentally grueling the rigamarole of showbiz success can be. Her young co-star Katie is also along for the ride, but only in the metaphorical sense, as she’s quick to turn down Sally’s offer to literally ride with her and Barry to the premiere in the wake of his abusive tirade in the writers’ room. In a clumsy attempt to dismiss Katie’s negative perception of Barry, Natalie only winds up painting a clearer picture of his poor emotional and mental health, which serves only to alarm her even more. But as Katie discovers, the pressure to keep quiet about interpersonal wrongdoing in show business is a lot to bear. When an interviewer asks her about Sally’s relationship, she manages to summon up the energy to lie about it in an effort to preserve her job and Sally’s reputation, a move that I strongly suspect she’ll attempt to undo rather soon.

Prepping for the day’s shoot on Laws of Humanity, Gene’s fear abates just long enough for resentment to fully set in. Their lines echo their real life circumstances all too closely, and finally compels him to ask exactly what transpired with Jance. Even though Gene can be a self-absorbed curmudgeon, intelligence is in no short supply, and only takes a few key pieces for him to put the puzzle together: Fuches acted as Barry’s mentor, and Gene’s casual decision to share Barry’s unhinged confession, what he had first taken as nothing more than a semi-interesting original monologue, in front of Janice was what allowed her to solve the case, leading to her death. Understandably, Gene feels responsible for it all, but Barry registers little aside from his need to get them both back to The Plan, and for Gene to simply get over it (telling the man whose life you ruined, “Meeting you changed my life for the better,” is an impressive lack of self-awareness).

The Bolivian and Chechen leadership are both eager to strike back at one another. Cristobál is trying desperately to convince Fernando that it’s worth walking away from L.A., and almost brings himself to believe he may just take the men home after a conciliatory meal at Johnny Rockets. Meanwhile, Batir (JB Blanc) has grown increasingly impatient and wants to strike back at the Bolivians with any means necessary, even if it means buying a makeshift bomb off of the dark web to plant in Cristobál’s house. Obviously, this won’t do for Hank, and after unsuccessfully trying to divert Batir’s fury towards Fernando, he tries one last Hail Mary: hiring Barry to kill Fernando in a last ditch effort to take the fight out of the Bolivians with minimal bloodshed. Barry quickly replies no (because of course Hank relayed this via text) but when he picks up his now-ringing phone expecting Hank on the other end, he’s surprised to discover it’s, in fact, Fuches on the line.

The most shocking thing about this episode is the relative calm these two men display for one another, both of whom have located a resigned placidness in their individual circumstances. It’s interesting to watch Fuches pull the same gaslighting tactics on Barry by offering an apology that’s obviously intended solely to compel Barry to offer one of his own. But once Barry makes it clear that any sort of reconciliation is impossible, the conversation begins to grow hostile. Fuches’ words are mostly intended to hurt Barry, but they contain the one truth Barry’s desperate to overlook: there’s no getting past what Barry has done to Gene. As we see on the set of Laws of Humanity, Gene certainly hasn’t. Despite his unspoken status as a hostage, Gene’s infamous temper rises to the surface. When Mark-Paul Gosselaar, occupying the lead role of Hugh Manity (an exceedingly awful pun), sets the scene in motion, Barry walks in and delivers his lines. Gene goes off script and ends up sucker punching Barry in the face before yelling at him to stay away from his family. It honestly wouldn’t be a surprise if that take makes it into the episode’s final cut. As he runs away from set, Gene is shaken by the realization of what he’s just done, but Barry is too withdrawn over his plan falling apart to feel any anger yet. Instead, he goes back to what he knows, which is being a killer for hire. He calls Hank back to tell him he’ll take the job and kill Fernando. Hank and his men are elated—Akhmal (Turhan Troy Caylak) yelling, “Yes! Gang gang!” is a hilariously jubilant cry when you consider it means he’s no longer responsible for handling the bomb—but Batir is less than thrilled. Between Hank’s eager willingness to work with Barry again and his reticence to attack Cristobál means things aren’t adding up anymore. Even if Barry is successful, it looks like Hank is about to trade one problem for another.

As the episode draws to a close, we’re reminded that the opposite of vengeance is forgiveness as Ana (Marika Dominczyk), the lovely property caretaker who’s become close to Fuches, relays a fable about a group of wronged farmers who lose their souls for the sake of vengeance. It’s an instructive cautionary tale, but it falls on deaf ears (“The Vengeance Army thing, how long did that take him to put together?”). Fuches’ previous peace is gone, replaced with nothing more than an ego-driven need to remind Barry that he’s the person who made him the killer he is. There’s an unsettling “if I can’t have him, no one can,” quality to Fuches’ possessiveness of him, as we’re reminded when he derisively alludes to Gene as Barry’s “best friend.” It’s also a pathetically empty urge; here’s Fuches, turning down his own version of heaven, a life that by most definitions is perfectly lovely and worth living fully, simply to make a point that was utterly forgotten until he made that call. Ana tries to make him understand the story’s message, but Fuches, face awash in the red glow of the nearby fire, is no longer giving any thought to his soul or the happiness he’s only just recently found.

We already know a fourth season of Barry is on the way, but with this season rapidly descending into increasingly hellish mental spaces—to the point that it’s hard to remember that this show is largely touted as a comedy—it’s likely that few of these people will make it out alive. It seems the one way to guarantee as much suffering as possible is for each of these men to actually succeed in seeing their ill-thought plans all the way through.

No biz like show biz advice:
“You don’t want to be the real you in the wrong way”

NoHo Hank’s two cents of wisdom:
“You’re not a blimp on his radar, okay?”

Kaleena Rivera is the TV Editor for Pajiba. When she isn’t imagining what a “Cake Boss” Avenger would be like (bless Sally’s impressive ability to avoid such a huge cultural behemoth), she can be found on Twitter here.


← Twitter Users Ponder Their Favourite Road Movies | Mike Myers 'The Pentaverate' Is Not Why Netflix Is Cratering, But It Sure Doesn't Help →