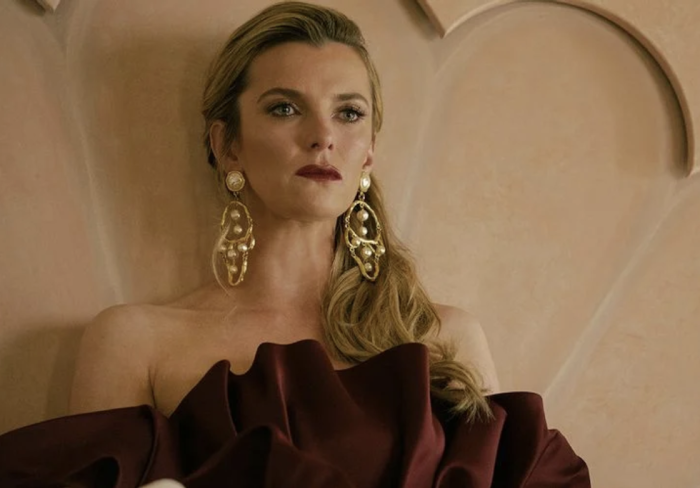 Apple TV’s 'Roar' Is More of a Whimper

Allegories don’t need to be subtle in order to be good. The “The Monsters are Due on Maple Street” is one of the bluntest instruments in the history of TV, but also one of its most effective; at once embracing — on the surface — the supernatural leanings of a typical episode of The Twilight Zone, before subverting them at the last minute. What makes it, and The Twilight Zone more generally, so effective, is that it understands when to lean into the supernatural and when to shy away from it; when the monster is otherworldly or something all too human. It’s striking that one of the best episodes of Roar — Apple TV+’s new anthology series — is the one that is, from concept to execution, with all of the politics in-between, the least subtle.

“The Woman Who Was Kept on a Shelf” stars the iconic Betty Gilpin as Amelia, a former regular on the child-pageant circuit, who later becomes a model, before finding a new life as the trophy wife of her millionaire husband. Nothing about this sentence screams subtlety; in fact, all it does is scream. But that’s OK, because “Shelf” is Roar at its most self-assured, showing with the most clarity exactly what it wants to be. The strangeness of “Shelf,” and of the show more generally, works here because the whole world is just as off-centre as Amelia and Harry (Daniel Dae Kim). Whenever she describes her new role in life, it’s met with bemusement but not shock, a shrug of the shoulders, and the sentence “well, whatever makes you happy.” In knowing what it is, “Shelf” allows the blunt politics of Roar to feel smart, a remedy for an uncertain world. From the fairytale opening of the episode — “once upon a time, there was a little girl” — to the simplicity of its core message, that Amelia doesn’t need to choose between beauty and brains, “Shelf” creates a world that is itself a kind of Twilight Zone, one that’s like our own but not quite, as if it missed a few key steps on the march towards progress.

So when Amelia finally comes down from the shelf — the fall briefly extended to become the kind of abyss that normally exists in dreams or nightmares — and bursts into an elaborate dance routine down the street, on the beach, and into the water, there’s something genuinely liberating about it. Coupled with the fact that she says to a bemused pair of strangers that she’s never been to the beach before, “Shelf” paints a portrait of a woman who has literally had some of the pleasures of life denied to her because of the way that she’s perceived, and the way that perception might have been internalized. That it’s a commentary on objectification simply turns Amelia into a kind of capital-O Object feels smart rather than an oversimplification. This simple line drawn between real theme and supernatural exploration also appears in “The Woman Who Ate Photographs,” which uses the photo-phagia of Robin (Nicole Kidman) as a way to explore not only the dementia of her mother (Judy Davis) but the uncertain space that her life is entering, the idea that she’s “not a daughter anymore” and “almost done with being a mother.”

When Robin eats a photo, she briefly embodies the memory documented by the image; it’s more of an escape from her uncertain situation than it is a powerful moment of nostalgia, and the way she comes crashing down to earth is more striking than her brief disappearance into the past. But still, it captures the uncertainty of memory: its imperfections, and how easily it can slip away from us.

The same, unfortunately, can’t be said for all of the episodes, which struggle with balancing the strange and the everyday. Roar ends up getting off on the wrong foot with opening episode, “The Woman Who Disappeared.” The eponymous disappearance of Wanda Shepard (Issa Rae) happens when she’s midway through a meeting with a bunch of well-meaning white studio executives who have plans to adapt her memoir into virtual reality — they call it an “exercise in empathy.” But the disappearance itself comes out of nowhere — a few seeds seem almost planted in the episode’s opening act; an algorithm not recognising her, a booking canceled out of the blue. Whether or not it’s the presumption that her experiences exist to be empathy exercises, and her disappearance is a result of that being taken from her; or if its a reflection of an uncertain identity — as Wanda herself says, “I don’t know who I am” — is unclear. This is a problem because Roar tries to leverage the uncanny as a way to make real-world commentary, and when that strange version of our own world simply jolts in and out of frame as it does in “Disappeared,” then, no matter how good the intentions, the execution is never able to stick the landing.

The problem of Roar might just be the curse of inconsistency that always follows around anthologies. But this feels like something more serious than a case of variable quality, and instead something more existential for the show itself. On an episode-by-episode basis, Roar seems to almost turn into a slightly different show — there are moments where Wanda’s life almost feels like the VR of her memoir adaptation, veering towards hard sci-fi but pulling back — and the one-line concept of most of the episodes (in which an abstract description of what a woman does is simply followed by the word “literally”) don’t quite land. Like Wanda herself, some of them simply flicker in and out of appearance. And while this might lead to some individually strong episodes or powerful moments within them, it means that Roar is never quite as full-throated as it might want to be.


← In This Week's 'Riverdale,' Tabitha Tries to Save Martin Luther King, Jr. and Drinks a Milkshake Out of the Holy Grail | 5 Shows After Dark: 'Preaching Evil' Premiere Peacock, 'This Is Us' on NBC →