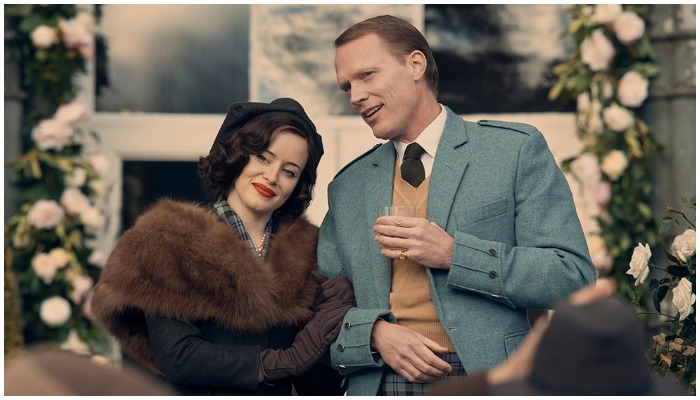 As Margaret, the Duchess of Argyll (Claire Foy, excellent again in the role of a woman who navigates the gulf between public and private life with uncertainty, self-assurance, and anger), is driven to court, she hears people — mostly other women — shouting at her through her car window. They call her a “hussy,” a “slut,” and maybe most pointedly, say that she’s a “wife and mother.” This scene — the opening of the three-episode miniseries — isn’t exactly subtle in what it says about the role of women and what it means to be thrust into public life, but it is telling. It’s a way of letting A Very British Scandal — an anthology-esque continuation of the wonderful 2018 series about Jeremy Thorpe — set out its stall, thrusting its key themes to the forefront immediately. This isn’t going to be a subtle show, but maybe it doesn’t need to be.

It’s in moments that are literally brutal in their lack of subtlety that Scandal is most clear about what it wants to do, and how far it’s able to go in order to condemn that. If, of course, it even wants to. When her marriage to Ian, Duke of Argyll (Paul Bettany) is basically over but they haven’t yet divorced — for any number of reasons: her adultery; the fact that he only stays married to women until they can be drained of their money; or that these two simply bring out the worst in each other — Ian attacks Margaret. On top of her in bed, hands wrapped around her throat, he bellows: “What is the point of you?! What are you FOR?!” And for Ian himself, the answer is simple: she’s there for money (the post-narrative title cards inform us that a few weeks after the end of his marriage to Margaret, he married an American heiress), but for Margaret herself, the question seems uncertain, something that also echoes into the show itself.

One thing that Scandal isn’t all that interested in doing is picking up Margaret, or offering a version of the story that’s all that sympathetic to her. Of course, through contemporary eyes, this decades-old case — and all of the violence within it — is clearly something informed by ingrained institutional misogyny. But the show doesn’t use its modern perspective as a way to bluntly point out what was — and in some ways, still is — wrong with the ways in which women are perceived in public life. Instead, it uses Margaret’s story as a microcosm for not only these problems, but wider ones around class, expectation, and the roles that women might be expected to play. After her father’s funeral, Margaret is ambushed by former friend Maureen Guinness (Julia Davis), who insists that Margaret give Ian everything that he wants, because “it’s not just your flapping fanny out there for the world to see. It’s all of ours.” Maureen thinks that Margaret’s behaviour is dragging down the upper class into the mud — insisting that the majority of the population look up to their ilk because “we’re not like them.” — and Margaret’s response is telling and damning in its simplicity: “perhaps we should be dragged down.”

For all of the scandal surrounding Argyll Vs. Argyll, the marriage and its dissolution don’t seem like the most telling aspects of the world that Scandal takes place in. Instead, it’s the way that the women interact with each other, from the tension that always exists between Margaret and Maureen, to the way that Margaret — in the early days of her marriage — refuses to believe it when one of Ian’s former wives says that he’ll simply leave her by the time she runs out of money. By casting a net beyond this marriage, Scandal is able to show a world in which any kind of power and favour that women might have experienced as something deeply precarious: there’s always another wife on the horizon; always a reporter or photographer waiting to bring someone down. It’s surprising that the show cares so little about what happens to these women once they’ve fallen.

This isn’t to say that it’s callous, or relishes in the way that Margaret is raked over the coals — in court, in the papers — and those post-story titles also insist that this was “the first time a woman was shamed by the mass media”, and it’s this act of shaming, rather than the aftermath of it, that Scandal is most animated by (I almost expected a fourth episode, a kind of post-court wrap-up, like the end of Impeachment). The show seems to understand the ways in which Margaret is trapped; from the way that she’s perceived both in the headlines and because of them — with a very striking moment where Ian uses a cigarette to burn out her face in a newspaper image — to the way Ian says “to the public, this will always be about your innumerable, flagrant infidelities.” And one of the most fascinating, slightly tragic things about Scandal is that it’s unable to offer a cure for these ills; that all it can provide is a diagnosis: about the biases of institutions, about the reach and abuse that so often stems from powerful men.

When tensions flare in their marriage — oscillating between violence, passion, and neglect — Margaret asks Ian not to treat her like his other wives. As this story unfolds it becomes clear that Margaret, no matter her status, stature, or allure, is unable to break free of being one of his other wives or, in the eyes of the public, simply being another adulterous woman. That’s what makes the show so powerful in its lack of subtlety; the fact that, whether Maureen wants it or not, Margaret has been dragged down to a baser level, and her whole social class has gone down with it. The trial reveals the violence and alcoholism of Ian as much as it does the adultery of his wife. But in the end, the thing that matters is where institutional sympathy lies, and Margaret being labeled “debased” and even having a “queer perversion” by the judge creates a vicious, echoing cycle between the violent exclamations of the women who greeted Margaret on her way to court, and the reality of life beyond it.

All three episodes of A Very British Scandal are available on Prime Video.