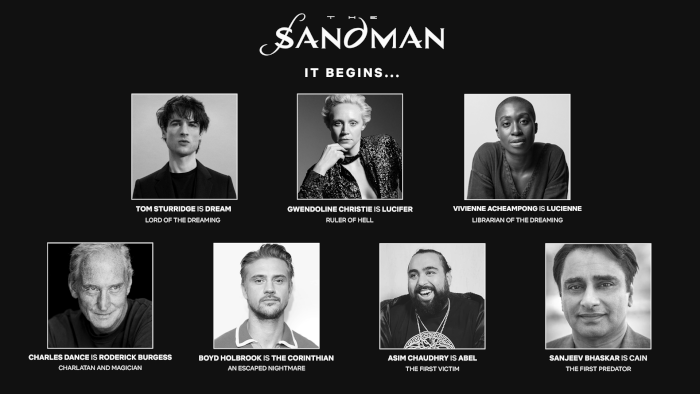 Four months after dropping the news that shooting on the long, long, LONG awaited Sandman television series has begun, Neil Gaiman and company decided to send the internet into a tizzy on an otherwise mild Thursday afternoon by throwing down the list of performers tapped to bring his iconic creation to life.

You have all waited so patiently, so here you go. It's time to announce things. It's time to name the Dream Lord. And several other people…

This news has, unsurprisingly, led to much flailing, especially seeing as how fans of the source material [raises hand] have dealt with so many attempts at adapting the source material since the ’90s and onwards into the new millennium when it was basically accepted that the possibility of an adaptation was nothing more than a pipe dream. Then in 2013, seemingly out of the blue, it was announced that there was going to be a feature film that was going to be—this part feels like a fever dream but I know this happened, I WAS THERE—directed by and starring Joseph Gordon-Levitt. This project fell through with the ever-so neutral “creative differences” cited as the reason, and fans quietly put away their dream cast lists. There was a moment a few years later when it seemed like the film adaptation may yet again rise like a phoenix from the ashes, only to wither away on the vine yet again. At this point, this seemed like it just wasn’t meant to be.

I clearly underestimated the power of money because lo and behold, a union was formed between two titans, Warner Bros. and Netflix, for a deal for television rights in 2019. While the news made some waves, it was relatively muted because like the world’s most obnoxious off-and-on relationship, we’ve been here before. It was only last October that Gaiman, in the most casual fashion possible, made it clear that, no, for real, this was ACTUALLY HAPPENING.

Oh, we started shooting on Thursday. Dr John Hathaway has brought a book from the museum in which he works, to Roderick Burgess. But you're right, it's going to be time to announce some casting soon. https://t.co/goXqhEZHgi

So without further ado, here are the confirmed cast members thus far:


So Morpheus, aka Dream of the Endless, is Tom Sturridge. Let's just say that he's perfect for the role. pic.twitter.com/LxnHglxLLp


I’m not terribly familiar with his film work, though I did see him in his 2013 Broadway run in Orphans. Honestly, my first thought was “so young!” but apparently he’s thirty-five. The man just so happens to be equipped with a bit of a smooshy babyface. I’m still having a hard time shaking off James McAvoy’s pelvis-rumbly interpretation of Dream from the Audible adaptation, but Sturridge deserves a fair shot and if Gaiman says he’s gonna kill it, I believe him.


Casting Lucifer was a delight. I'm so very glad that @lovegwendoline is the Ruler of Hell in Sandman on @netflix. pic.twitter.com/YnxXUy9S5T


This is the casting news that made me lose my shit. Gwendoline Christie is such a playful performer. She’s going to knock this out of the park.


In Sandman Roderick Burgess is more than just a charlatan and a magician. He also blackmails people. And he captures the Lord of Dreams, while trying to do something else. He's Charles Dance… pic.twitter.com/gr96rv3ofe

Seeing as how Burgess is basically Tywin Lannister if he was a magician and head of a secret order, calling Charles Dance to see if he’s available was the sensible thing to do, really.


This is a photo of Boyd Holbrook. It is not a photo of the character in Sandman that he will be playing, the Corinthian.

For those who are wondering how I can tell, it's something about the eyes. pic.twitter.com/9Izn3Bq4Tb

Honest to God, no shade to Boyd Holbrook here, but this is the kind of “nice-looking white guy” look that translates very easily to “serial killer” (that’s a good thing here!). Once they get those chompers on that face, dude’s going to be terrifying.


One of my favourite changes from the Sandman comic. Our Lucien has become a Lucienne, and @vivacheampong brings the wise librarian of dreams to pointy-eared life. pic.twitter.com/2eLyBM14GC


Aside from Christie, this is the other casting news that has me very excited. Lucien, now Lucienne, is the librarian of the Dreaming. I suspect Vivienne Acheampong is going to bring some much-needed levity to these proceedings.


Cain is the first murderer. He is Abel's brother, locked in a monstrous double act. He's going to be played in Sandman on @netflix by @TVSanjeev. pic.twitter.com/RJtPdLmU88


I love it when comedians are cast in dark roles. I’m ready to see Sanjeev Bhaskar bring the fury.

Asim Chadhry is Abel in the @Netflix Sandman. He's @AsimC86 and he's hilarious and tragic. pic.twitter.com/pzdsKaU9uI

Oh man, Asim Chaudhry, you’re going to make me laugh and feel terrible about it at the same time, aren’t you?

The first season will be an adaptation of “Preludes & Nocturnes.” Notably, the most heavily anticipated casting news, the role of Death, hasn’t happened yet. Presumably, it’s because the showrunners like to watch fans wriggle in anticipation like anxiety-riddled worms on a hook. Well played, you lot. Worry not, for it probably won’t be long before we get the second round of cast news. In the meantime, let’s dream cast, shall we? (no pun intended, I swear!)

← Did The MCU Condition Their Audience To Not Accept Change? | 5 Shows After Dark: 'Search Party' Fourth Season Finale HBO Max, 'Mr.Mayor' on NBC →