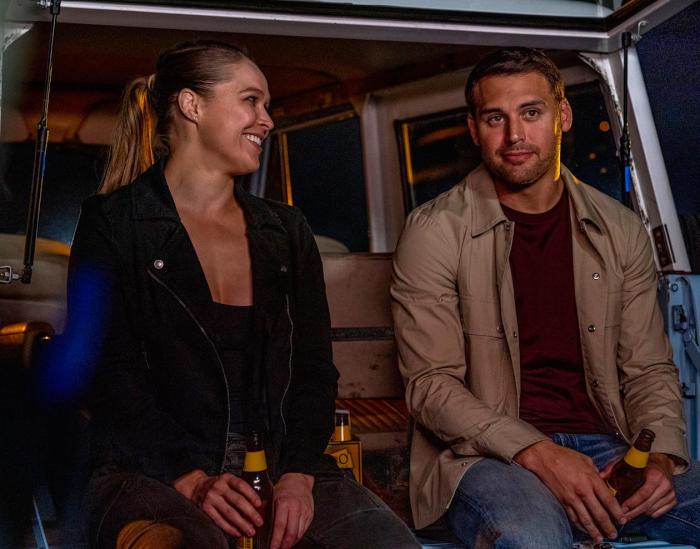 '9-1-1' Recap: Guess Who Joined An Underground Fight Club This Week?

Well, nothing is going down quite the way I expected on 9-1-1 this season — and mostly that’s turning out to be a very good thing. The biggest surprise of last night’s episode was that Buck’s ill-advised lawsuit was settled, and the show won’t have to drag that storyline out any farther. Which is great because I couldn’t have handled too many more scenes like that messy arbitration hearing. Buck’s lawyer raked Bobby and all of his colleagues over the coals in an effort to prove that Bobby was discriminating against Buck by not allowing him to come back to work due to his medical issues. And while that does lead to a hilarious admission that Chim was back on the job a mere month after getting that rebar jammed through his skull (he’s a fast healer, OK?!), it’s also largely pointless because — as Bobby points out — technically Buck hasn’t been fired. He still has his job! He’s just on medical leave!

So yeah, the lawsuit was dumb — but the city still offered Buck a multi-million dollar settlement to keep the thing out of court. And Buck, true to form, continues to whine because he didn’t want money, he just wanted to go back to work (which maybe he should have thought about before he burned all of his bridges with this lawsuit…). So somehow he turns down the settlement and the LAFD brass decide to give him his job back anyway. It’s all resolved too neatly, except for one crucial reveal: Bobby was given the chance to transfer Buck to another station and he turned it down, because that would be too easy. Better to let Buck deal with the repercussions of his actions, and try to mend the relationships he’s hurt. Like his relationship with Eddie! Poor Eddie, and poor Christopher. Part of this lawsuit process was not being able to talk to his colleagues, which meant that Christopher missed his favorite babysitter and Eddie couldn’t call Buck to bail him out of jail when he was busted for assault (he punched a guy over a handicapped parking space).

Instead, Eddie calls up Bosko (Ronda Rousey), and after bailing him out she finally fulfills her entire purpose as a special guest star: she takes him to a FIGHT CLUB! Yup, 9-1-1 let Rousey fight some dudes, and then later Eddie goes back because he’s hooked on this brutal emotional outlet (and I’m hooked on watching him fight, so really everybody’s a winner here). So, what is this show going to do with Rousey now that she’s kicked some ass, and Buck is coming back to the station? I for one was convinced the writers were setting up a romance between Bosko and Eddie, but apparently I was reading it all wrong. In an interview with The Wrap, showrunner Tim Minnear straight up said that Bosko was only there to introduce Eddie to the exciting world of underground punching, and that “We’re not setting up a love match here.” Phew!

An all-new episode of #911onFOX airs next Monday at 8/7c. pic.twitter.com/p7U8pORofH

In the midst of all this Buck nonsense, however, the show decided to tackle the issue of racial profiling and police brutality, and since Angela Bassett was involved it was predictably excellent. It all starts when her ex-husband, Michael, is pulled over for expired tags while driving their kids home. Michael starts out polite but things escalate — and when the ensuing confrontation wakes up Harry in the backseat, the junior officer is so spooked he almost shoots the boy. Michael is furious, Harry is traumatized, and May has the entire encounter recorded on her phone, ready to release. The question is: what should they do? Athena initially tries to empathize with the officers, pointing out how scary those traffic stops can be, but she does some digging on her own and realizes the senior officer has a history of racial profiling complaints. She also knows that even if she files a complaint herself, nothing will happen to him because ultimately nobody was hurt. So instead, she makes her point in a very Athena way — by tailing him until she can catch him drunk driving, then pulling him over for a lecture on how it feels to be harassed by a cop and treated like a criminal. Meanwhile, Michael also has a lecture up his sleeve for Harry: how to be a Black man in America. He gives practical tips like moving slowly, not reaching for things without explaining his actions first, but ultimately Michael is teaching his son that sometimes dealing with the cops has nothing to do with right or wrong and everything to do with keeping himself safe… from people who have the same job as his own mother. Worse, the problem is even larger than just dealing with the police — that you don’t have to be different to be treated different, and this is a reality Harry will have to face as he gets older. I was impressed by how effectively — and fairly — the show handled the subject by focusing on how dangerous it is to be a cop, and how dangerous well-meaning cops with a serious bias can be to the community. These weren’t men out for blood or ruled by hate, and yet they still allowed an innocent traffic violation to escalate into violence. They did not do their jobs well, and it could have ended in tragedy. In a show that usually deals with the most extreme viral news scenarios, it wisely chose to allow this situation to remain in a familiar grey area — which served to underscore how truly terrifying it was, simply for being so commonplace.

As for the emergencies, the episode kicks off with a 9-1-1 call from a “rage room” (think an escape room, only instead of escaping you just use a sledgehammer to bash stuff). Two women booked a room to work out some frustrations, only for one of the women to realize that the other one was secretly sleeping with her husband — which isn’t a thing you want revealed to a person holding a giant hammer! Bobby’s team has to rescue the cheater from a barrel she has closed herself in for safety, and while I couldn’t find any news stories with this exact scenario, there is steep rise in stories about rage rooms opening over the past few years. It’s almost like we need more outlets for our anger lately? Hmmm. HMMMMMM. The other big emergency of the night took place at a duck farm, where animal rights activists (“Rage Against The Cage”, snicker) showed up to protest the foul treatment of the fowl. This case was clearly inspired by a duck farm protest in Sonoma County this past June, where over a hundred activists were arrested — right down to the people using bike locks to chain themselves by their necks to the conveyer belts, while workers activated those machines to harm the protesters. Even their t-shirt designs were similar!