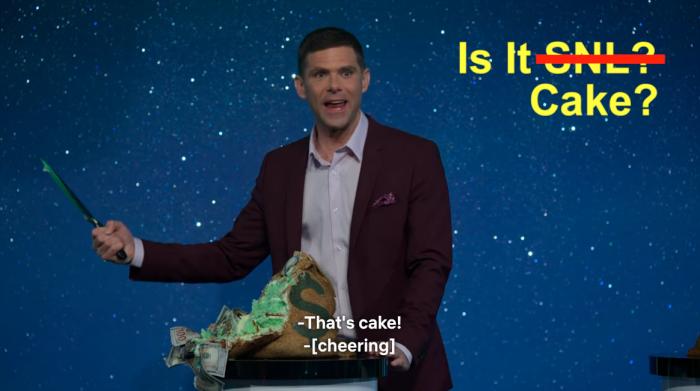 Dustin Sits In The Dark As We Discuss 'Bad Vegan,' 'Minx,' 'Is It Cake?' And More On Podjiba!

A fun fact: as I write this (and as we recorded the podcast), Is This Cake? is the top Netflix show in the United States. And number two is Bad Vegan.

Basically, what I am saying is that sometimes we do, in fact, give the people brief discussions of what they want! If the people are the ones who watch the top shows on Netflix, or want to hear a bit about said shows without watching them.

In other discussions that are purely for the people, Dustin’s Riverdale Recap is back! The best segment this side of the Manifest minute.

…and then, chaos! The semi-finals of the Fiscal First Quarter Categorization Challenge are upon us, and you won’t believe what happened…

…that’s right, in a stunning upset, DuckTales prevailed over Justified and will be in the championship next week, facing off against another surprising finalist, early 2000s cult hit Clone High!

We’ll have to see next week which show reigns supreme, but I think we can all agree that no matter what, Dustin will have to watch an animated show this summer, which is good news. (Publisher’s Note: Is it, Dan? IS IT?)

Podjiba! The podcast where sometimes you have no good car ideas, Paul. (But you can download the episode here.)