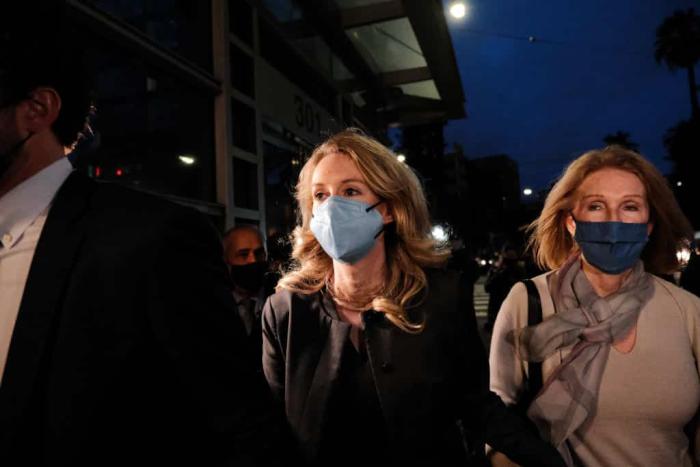 After a months-long trial, Elizabeth Holmes, the founder of the disgraced medical startup Theranos, has been found guilty on four counts of fraud. Prosecutors said Holmes knowingly lied about technology she said could detect diseases with a few drops of blood. She denied the charges, which carry a maximum prison term of 20 years each. Holmes was not taken into custody and no date has yet been given on her eventual sentencing.

Holmes faced 11 charges in total and was found not guilty of four charges relating to defrauding the public. The jury remained deadlocked on the remaining charges. According to the BBC, Holmes showed little emotion when the verdicts were read out, and hugged her husband, Billy Evans, and her parents before leaving the courtroom.’

The fall of Theranos became something of a public obsession as well as the ultimate cautionary tale on the smoke and mirrors world of Silicon Valley hype. Holmes dropped out of university at 19 to start her company with the lavish promise that patients could receive accurate testing on thousands of conditions, including cancer, based on only a few drops of blood. Holmes became the new face of supposed all-American innovation, mingling with the likes of Bill Clinton and Larry Ellison while appearing on the cover of Forbes. Dressed in Steve Jobs cosplay, complete with a black turtleneck, Holmes was positioned as the next great technological disrupter and was later crowned the youngest self-made female billionaire. At one point, Theranos was valued at $9 billion. It was all a lie.

Theranos made a big deal out of keeping their technology secret, claiming it was to avoid competitors stealing their ideas, but it was actually because none of their machines worked. Her company secretly relied on commercially available machines to run the tests instead, As Holmes repeatedly told investors that the technology worked as planned, staff were forced to scramble to hide the issue. Tests came back inaccurate for patients. Theranos staff tried to warn Holmes about the issues, only to be told to downplay their concerns. Meanwhile, the press seldom dug deeper than Theranos’s own PR, even as scientists noted time and time again how it would be essentially impossible to diagnose thousands of ailments from a few drops of blood taken from the patient’s finger. It wasn’t until John Carreyrou of the Wall Street Journal wrote about the failings that anyone actually listened (his book on the case, Bad Blood, is a must-read). Theranos’s value eventually fell to zero.

White-collar crime doesn’t tend to lead to a high conviction rate in America so it’s a surprise to see Holmes found guilty in any capacity (four guilty verdicts out of 13 isn’t bad, all things considered.) Whether she’ll actually serve any hard time for it is another matter. Her former business partner and ex-boyfriend Sunny Balwani, who the defense tried to paint as the real criminal, faces trial next month.

Meanwhile, the Holmes story will only get more exposure. Hulu’s The Dropout, based on the podcast of the same name, will premiere soon with Amanda Seyfried in the lead as Holmes. Jennifer Lawrence is also set to play Holmes in a film to be directed by Adam McKay.