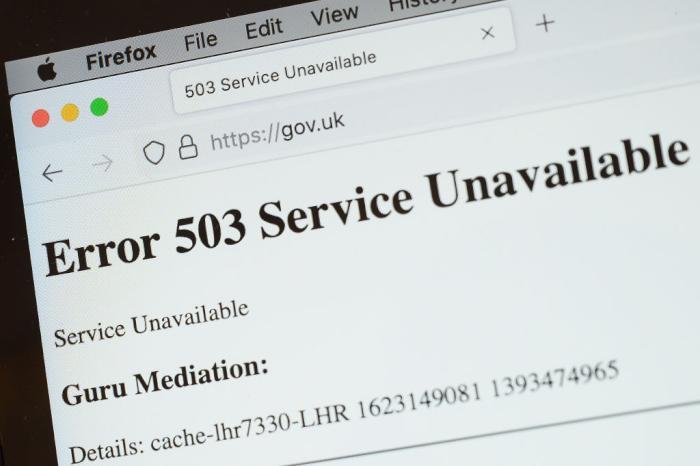 The Fastly Outage Demonstrates Why the Internet Is Infrastructure

An early morning outage brought much of the Internet to its knees after Fastly, a cloud service provider, went down. Along with it went much of the services on which we’ve come to rely: shopping at Amazon and Target; news from CNN and The New York Times; and media from Hulu, Spotify, and others. Although the outage was brief, it had enough impact that governments tweeted to their constituents.

We are aware of the issues with https://t.co/uLPSBt4jdQ which means that users may not be able to access the site. This is a wider issue affecting a number of other non-government sites. We are investigating this as a matter of urgency.

It’s not the only large-scale outage in recent history. The East Coast suffered a major outage in January of this year when many of us were working and schooling from home. An Azure DNS outage brought down every Microsoft service. In May a Salesforce outage brought any number of support services to a grinding halt. If this sounds similar to the meat supply issues faced by the nation, that’s because it is, and for much the same reasons. If we allow the bulk of our network traffic to flow through the same service providers, then any outage will by definition have a huge impact.

Despite these incidents and an economy so dependent on Internet traffic that even brief outages can cost millions, Republicans still argue against large-scale broadband improvement projects and free municipal access.

The rule is that if you can stuff anything into the infrastructure box, then it counts as useful government spending. So everything is infrastructure now! https://t.co/v2xlQGfpUM

I know dunking on Ben Shapiro is easy, but he’s not an outlier on this. Even people normally pro-broadband expansion have pushed for lower investments than the Biden administration hoped for.

Even after the pandemic too many people still see the internet as primarily a vehicle for sharing memes and streaming movies. 9 million kids went through this pandemic without the kind of internet access they needed to do a year’s schoolwork remotely. About 42% of the workforce did their jobs from home during the pandemic and could continue to do so if their bosses didn’t crave the kind of hands-on micromanagement only possible in person. Broadband is infrastructure, and might be so integral to modern life to count as a human right. It’s as integral to business and education as roads, sewers, and school systems.

To be entirely candid, an infrastructure investment likely wouldn’t have made a difference here. Fastly has yet to publicly explain the outage, but most likely someone ran an update or changed a firewall config and temporarily locked their services until the appropriate change could be made. But the point remains. Without broadband access, we’d never even get the chance to complain about Amazon being down in the first place. And where would we be as a society be if we couldn’t bitch on the Internet? Imagine how much more productive we’d be. What a terrifying prospect.

← Making Sense of the Biden DOJ's Decision to Defend Trump in a Rape Lawsuit | After Holding Dirty Laundry Hostage, Chris Harrison Is Officially Out as 'Bachelor' Host →