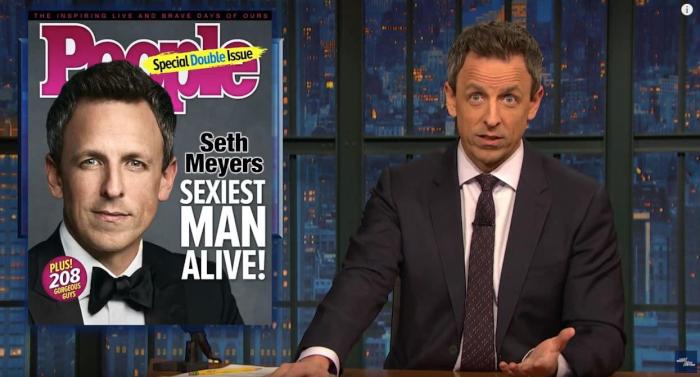 Holy Sh*t, You Guys, Seth Meyers Is Really Good At His Job

If you watch enough late-night TV (which, you know, I do), you pick up on the fact that comedians, specifically late-night host comedians, hate the idea that Trump is good for business. Which makes sense. It’s particularly ghoulish to frame a national disaster as benefiting an individual profession. If someone, for instance, mentioned to an Australian firefighter that their entire country burning down was “great for them,” we’d hopefully tell that person to go f*ck themselves.

But the thing about late-night TV is, if you’re good at it, our current Constitutional crisis has required that hosts up their game. Not only because of the intricate ways that connecting previous administrations to our current one can be difficult (and the Late Night gang’s unrelenting criticism of the Bush administration has not gone unnoticed or unappreciated), but also because of the overwhelming amount of material thrown at you on any given day. If you’re not totally on top of sh*t, you’ll end up with the same take that everyone else has without any insight or humor.

1) Tapp That Sass is absolutely a show I’d watch.

2) Seth says, “a president who lost the popular vote” like eight times. And, Seth, seriously

3) On a real note, the fact that we’ve designed many of our voting systems to favor unpopulated, rural areas seems, you know, stupid? I’m not arguing that less populated places should get less representation than densely populated areas, but they should get the same. Is there a decent reason not to? The electoral college doesn’t change the fact that elections are decided by only a few states, it just changes the states that decide the election. I’ve also heard the argument that large, liberal areas would have control of national political races because more people live in areas that support progressive policies and candidates. So the argument is that we shouldn’t do the thing that the majority of the country wants to? Who came up with this? If we have proportional representation in the House and flat representation in the Senate, what jackass decided we should have reverse-proportional representation in the electoral college? Is your argument that rural areas are more remote, and therefore more difficult to travel to? Great! Let’s rebuild our crumbling highways, install high-speed, cross-country rail lines, and make internet access a public commodity. You know who supports most of those ideas? Godd*mn progressives. Because when you allow for actual equal representation of all voters, not only would our country look a lot more progressive, THE PROGRESSIVE POLICIES WOULD MOST OFTEN BENEFIT NON-PROGRESSIVES.

In short, Seth Meyers and his team rock, I’ll never get tired of ridiculing McConnell, and here’s a list of the ten most vulnerable Senate seats in the 2020 election. If you can, support a Democrat because #TakeTheSenate. And if you can support another Democrat, contribute to Amy McGrath’s campagin because, Chucky doll or not, Mitch McConnell is the godd*mn worst and he needs to go.