It shouldn’t surprise you that immigration is a topic that would rile up John Oliver. In part because Oliver himself is a naturalized citizen who had to undergo the nightmare that is the immigration process, but mostly because John Oliver isn’t a garbage person who thinks nothing but garbage things all day so he’s able to understand that people from other countries aren’t scary boogeymen trying to tear down the U.S. from the inside out. In simpler terms, he cares about immigrants and the immigration process because he’s not horrible enough to be Trump or one of Trump’s supporters.

All of which I enjoyed very much and appreciate a great deal given the lack of deep investigative reporting that most news shows are missing. But that’s not what I really about to talk about. What I need to talk about is Oliver’s poetry and when he’s getting that goddamn Pulitzer for it. You might remember that last week, Oliver had a couplet or two to say about Texas’ Tied-For-First Worst Senator Ted Cruz. In case you’ve forgotten the full poem, although more accurately just because I really enjoyed it and feel like writing it all out to read over and over again, here’s the text:

That man Ted Cruz can suck my balls.

Not to be outdone by Last Week John Oliver, Last Night John Oliver decided to enlighten us with another verse.

I wish he’d never get one vote,

That man Ted Cruz can lick my scrote.

And if Seuss isn’t high-brow enough for you, are you going to argue with Oliver’s reworking of the classics? 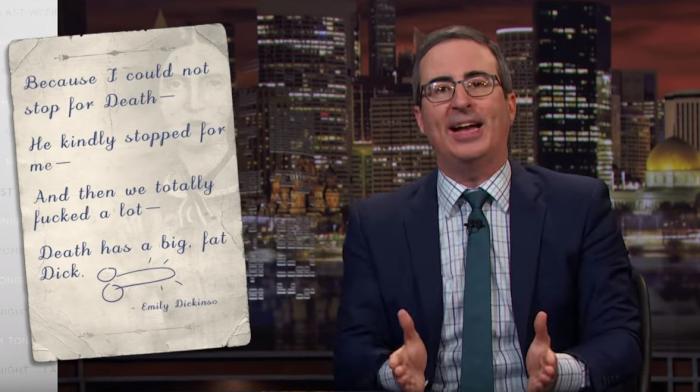 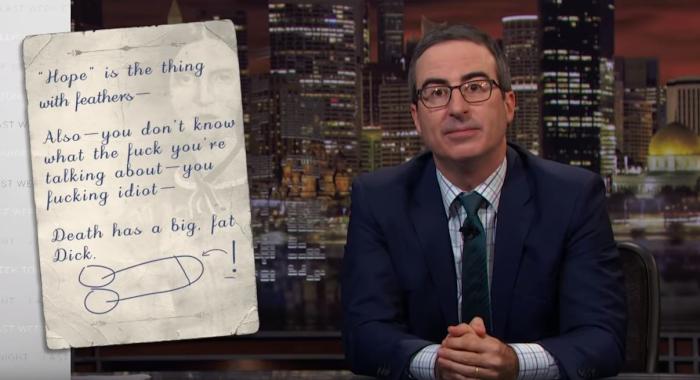 Case closed, obviously. John Oliver is the greatest poetic mind of his generation, and should immediately be made Poet Laureate of the United States. He’s able to delight us with his words while still speaking truth to power. That truth of course: death has a big, fat dick.

← For Some Reason, Twitter Is Unusually Excited About Obama's Netflix Partnership Today | Recap: 'Succession' Takes on the Davos World Economic Forum in 'Argestes' →